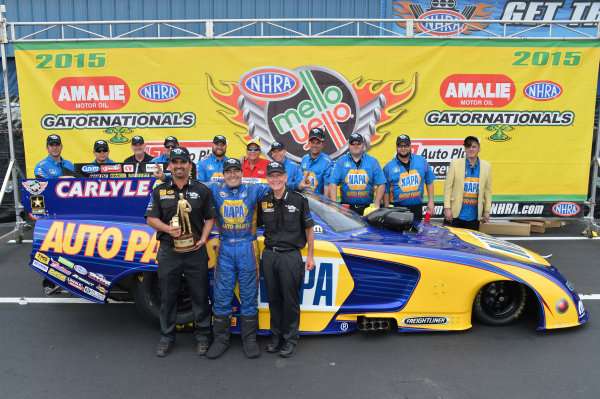 This past weekend, the 2015 Dodge Charger funny car continued its domination of the class in the 2015 NHRA Mello Yello Drag Racing Series, with Don Schumacher Racing’s Ron Capps winning his first event of the season, the third win in three events this year for Schumacher’s team after Capps’ team Matt Hagan won the first two events of 2015.
Advertisement

Don Schumacher Racing came into last weekend’s Gatornationals in Gainesville, Florida with the hopes of making it 3 in a row to start the 2015 NHRA season. Matt Hagan won each of the first two races while teammate Ron Capps looked strong in both events as well. Joining Capps and Hagan in a 2015 Dodge Charger funny car were Jack Beckman, Blake Alexander, Tommy Johnson Jr and John Hale for a total of six Dodge entries in the 17 car field.

Unfortunately, Schumacher’s team didn’t get off to a great start and the same could be said for the rest of the Charger teams, but things got progressively better for many of the Mopar teams as the weekend went on – with Ron Capps capping off the weekend with a big win.

Qualifying is Rough for Dodge
The first round of qualifying for the 2015 Gatornationals wasn’t pretty for team Dodge as the round plagued with tire smoke saw only Jack Beckman turning in a solid run on his first run of the weekend with a 4.081 at 309mph. Alexander, Hale, Johnson, Hagan and Capps all ran into one issue or another and because of that, none of those Dodge drivers turned out solid qualifying numbers. At the end of round one, Beckman sat 4th, Alexander was 8th, Johnson was 10th, Hale was 12th, Hagan was 13th and Capps was last (16th).

After round three, all of the Dodge Charger funny cars were in the field for eliminations, but the best was yet to come in round four. Capps, Johnson, and Hagan, all turned their quickest runs of the weekend while Beckman made a slower run and both Hale and Alexander sat out round four, as they were already locked into the field for Sunday’s elimination rounds.

Eliminations – Hagan Out Early
In round one of eliminations on Sunday, things went well for all but one of the Dodge Charger funny cars, as Matt Hagan saw his hopes of a season-starting three-peat slashed when Hagan lost traction and lost the race against Alexis DeJoria. However, Ron Capps beat Courtney Force, Jack Beckman beat Chad Head, Blake Alexander beat #2 qualifier Del Worsham, Tommy Johnson Jr beat Robert Hight and John Hale beat John Force. In case you missed it, with Johnson, Capps and Hale winning in round one, all three new Camaro funny cars were knocked out of the event by Dodge Charger funny cars.

In round two, Ron Capps took on fast qualifier Cruz Pedragon, who had not only turned the fastest time in qualifying, but his Camry was also the quickest car down the track in round one of eliminations. That didn’t matter to Capps, as he beat Cruz on the tree and drove away on the track, sending the fast qualifier home in round two. John Hale beat DeJoria and when Johnson ran into mechanical issues, Blake Alexander got a free pass to round three. Like Johnson, Jack Beckman lost in round two and a very tight race with Tim Wilkerson.

This meant that in the final four for the funny car class at the Gatornationals, three of the four cars were Dodge Chargers, with Capps facing Wilkerson and Alexander facing Hale. Alexander pulled the holeshot on Hale and lead early, but traction issues put an end to his incredible weekend and Hale headed into the finals. On the other side of the bracket, Ron Capps went slower but beat Wilkerson on the tree, setting up the second all-Mopar funny car final of 2015.

In the finals, we had seasoned veteran Ron Capps going head to head with John Hale. Hale had never been to a final round, nor had he ever been past the second round, having only ever won one race in his NHRA career coming into the 2015 Gatornationals. Hale had a slight starting line advantage and while he stayed side by side with Capps for the first half of the race, Ron Capps and his Napa Charger pulled ahead for the win.

This gave Don Schumacher Racing its third funny car win of the 2015 NHRA season and it made an even 3 for 3 for team Dodge in 2015.

Season Standings
After the third race of the 2015 NHRA season, Matt Hagan holds the top spot in the young championship race, leading second place Ron Capps by 26 points. John Hale is now 5th (94 points back of Hagan), Johnson is 6th (95 points back), Beckman is 14th (175 back) and Blake Alexander is 15th (196 back).