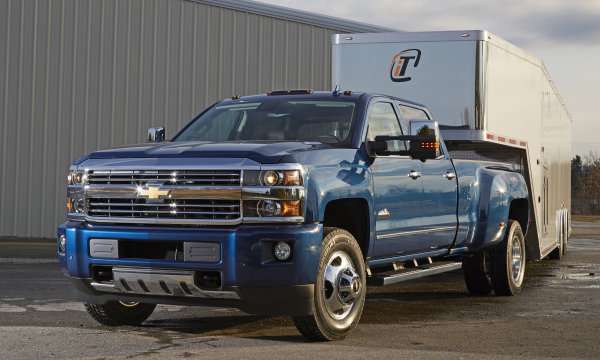 General Motors has announced that the 2014 through 2016 Chevrolet Silverado 1500 and HD can now be equipped with a new trailering camera system that adds three cameras to the standard backup camera system – allowing drivers to see in their blind spots and behind their trailer.
Advertisement

Yesterday morning, Ford Motor Company announced that the next generation 2017 Ford Super Duty pickups will have an optional trailer camera system. General Motors followed this up a few hours later by announcing that the current 2016 Chevrolet Silverado 1500, 2500 and 3500 can be equipped with a new trailering camera system of its own. Also, those folks who have a 2014 or 2015 Silverado can also purchase this system for installation.

“These are great examples of our commitment to provide truck customers with the most confident towing experience in the industry,” said Jeff Luke, Chevrolet truck executive chief engineer. “The fifth-wheel prep package has been designed by our structural engineers, to make the most of Silverado’s fully-boxed, high-strength steel frame. The trailering camera system was designed in partnership with our Chevrolet MyLink team to seamlessly integrate views from trailering cameras into the existing radio display.”

Silverado Trailering Camera System
The new Trailering Camera System is available on all 2014-2016 Chevrolet Silverado HD pickups, along with any 2014-2016 Silverado 1500 pickups with the optional towing mirrors. That mirror design is essential, because the new camera system begins with cameras integrated into each of the exterior side view mirrors. These cameras are linked to the turn signals in the mirrors, and when the driver flips on the turn signal, the camera on that side displays the blind spot area on the infotainment screen in the dash.

This Silverado Trailering Camera System also includes a component camera to be mounted on the rear of the trailer, which transmits wirelessly to the infotainment screen as well, with the power being provided by the trailer’s electrical system. Those who want even more camera angles can add a second component unit, which GM points out could be used inside of the trailer to monitor horses or other livestock.

The final component of the Trailering Camera System is the in-dash interface screen, which allows the driver to select from six different camera modes, including control of the standard backup camera in the tailgate. There will also be a camera integrated into the 3rd brake light on the cab of the truck, which will help with 5th wheel mounting, but it sounds like that piece of the system will not be included when the package first goes on sale next month.

When this package goes on sale at Chevrolet dealerships around the country next month, the retail price will start at $999, which will include the side view cameras, the component “trailer” camera and the software to make everything worth together.

As the video below shows, this new Silverado Trailering Camera System has a variety of uses, from monitoring your blind spot when changing lanes or turning to watching all of your corners when backing up. Also, as someone who does a fair amount of trailering horses, I love the option of an extra component camera to put inside of the trailer.

Rod wrote on April 7, 2021 - 1:09am Permalink
I've been trying to research if the cameras on my 2015,silverado High Country,would have captured a hit & run while it was parked ?