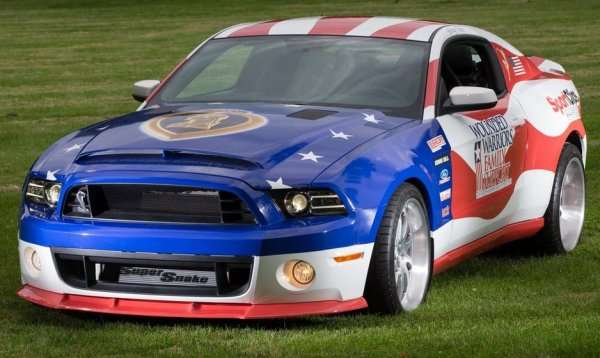 The gorgeous 2013 Shelby GT500 Super Snake version of the Ford Mustang shown above is currently on a tour of the United States, helping to raise money for the Wounded Warriors Family Support foundation’s 2013 High Five Tour – giving Americans around the country a chance to check out this awesome super-Stang while raising awareness for this great charity.
Advertisement

The 2013 High Five Tour of the Wounded Warriors Family Support organization has recently begun its West Coast swing with the stunning red, white and blue 2013 Shelby GT500 Super Snake Mustang making hundreds of stops throughout Texas, California, Nevada, Oregon, New Mexico, Arizona and many other states west of the Mississippi between now and the middle of November. Along the way, those folks who come out to meet the High Five Tour team have a chance to check out this awesome 850 horsepower GT500 Mustang in person and as a special part of the tour, those who come out to see the Super Snake are invited to sign the car with a message of support for those men and women who help to protect our freedom and their families. You read that part correctly – the folks who come out to see the Wounded Warriors High Five Tour Ford Mustang are able to write a message on the car, expressing their appreciation for the work of our soldiers.

The High Five Tour is a five month program that will take this 2013 Shelby GT500 Super Snake Mustang through 48 US states, over 60 cities and across 21,000 miles of this great country. While putting a great looking American flag wrap on almost any Ford Mustang would have made for a great tribute vehicle, the folks from Ford Motor Company and Shelby American went one step further than just donating a Mustang to the Wounded Warriors group – they donated one of the most powerful Mustangs ever.

The Ford Mustang being used for the High Five Tour started its life as a 2013 Ford Shelby GT500 Mustang with 662 horsepower which was then converted into the even higher performance Shelby Super Snake with the special 850 horsepower package. Shelby also fitted this special project car with their new wide body package to give it an even more unique, menacing look and in the long run, it is fitting that a car designed to help raise money for wounded American soldiers would be based on one of the most exclusive and most powerful American performance cars of all time.

The goal of the Wounded Warriors Family Support team taking this 2013 Shelby GT500 Super Snake Ford Mustang around the country is to raise $500,000 to build a pair of “smart homes” for two severely wounded American veterans. A smart home is a house specially designed to cater to the unique needs of these wounded warriors with home security, lighting, accessibility and mobility features that make living far easier for these injured soldiers. The 2013 tour is working to raise enough money to build homes for SFC John Masson of Fayetteville, North Carolina and Sgt. Rusty Dunagan of Guthrie, Oklahoma. Sgt. Dunagan lost his legs and left arm while on duty in Afghanistan on September 22nd 2010 and SFC Masson also lost both legs and his left arm in Afghanistan October 16th 2010. Both soldiers were injured by improvised explosive devices, forever changing their lives but the Wounded Warriors Family Support organization is working to make the lives of these two American heroes (and their families) a little easier.

In 2012, the organization was able to raise $350,000 to build two smart homes for injured soldiers – one of which was Lance Cpl. Tyler Huffman of Jefferson City, Missouri. Cpl Huffman was hit in the chest by an enemy sniper in Afghanistan on December 10th 2010, leaving him to spend the rest of his life in a wheelchair but thanks to the generosity of those who helped with the 2012 tour – Cpl Huffman now lives in a specially equipped smart home.

Click here to visit the Wounded Warriors Family Support website to check out the tour dates of the West Coast swing. With stops all over the Midwest and the West Coast – there is a good chance that one of these 100+ stops will be near you! The image above shows the 2013 GT500 Super Snake previous to heading out for the first stop on the tour earlier this year but if you visit the HighFiveTour.com website, there are tons of pictures of the Mustang making its stops around the country with people signing their tribute on the car.