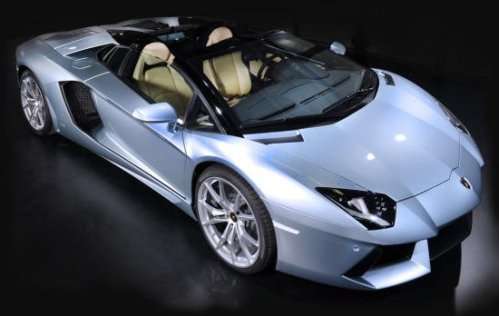 When the awesome new 2013 Lamborghini Aventador Roadster was unveiled earlier this week, the Italian supercar builder announced that this new open air supercar would carry a European price of 300,000 Euros but we know now that American buyers will be paying a bit more for the right to drive the Aventador Roadster on US roads.
Advertisement

The 2013 Lamborghini Aventador Roadster will carry a starting price of $441,600 plus a gas guzzler tax of $3,700 for a total introductory price of $445,300. I do not believe that this early figure includes items like sales tax or destination fees so the actual price out the door for a “bare bones” Aventador Roadster will likely be in the range of $473,518 when assuming a destination fee of $1,500 and a 6% sales tax (which adds $26,718). This presents a pretty substantial increase in price compared to that announced for European buyers as 300,000 Euros translates to roughly $384,000 US Dollars with the current conversion rate. Granted, the 300,000 Euro figure probably excludes a variety of fees that are tacked on at the final point of sale but it still appears as though American buyers will pay a premium to have this incredible Italian roadster in their garage.

With a price nearing a half million dollars, the 2013 Lamborghini Aventador Roadster will be one of the most expensive new cars on sale in America but considering that it will likely take a real shot at being one of the world’s most powerful and highest performance factory-stock, street legal supercars – the big price should not come as a big surprise.

Just like the hardtop version, the 2013 Lamborghini Aventador Roadster is powered by a mid-mounted V12 engine producing 700 horsepower and 509lb-ft of torque. This power is channeled through a seven speed single clutch semi-automatic gear box to all four wheels via an advanced all wheel drive system – a setup that allows this topless supercar to rocket from 0 to 62 miles per hour in only 3 seconds while being capable of a top speed of 217 miles per hour. This makes the Aventador Roadster just a touch slower than the 2.9 second 0-62 time posted by the hardtop version although the top speed remains the same. In addition to the ultra high performance drivetrain, the Aventador Roadster also features the high tech pushrod suspension from the hardtop supercar along with the 6-piston brakes up front and 4-piston units in the rear while unique lightweight wheels measuring 20 inches up front and 21 inches out back – all of which are wrapped in Pirelli high performance rubber.

It is unclear as to when the 2013 Lamborghini Aventador LP700-4 Roadster will hit US Lamborghini dealerships but when it does – it will offer a new benchmark for American motoring enthusiasts in terms of topless high performance. The Aventador Coupe posted the best lap ever on the BBC Top Gear test track, beating out the incredibly powerful yet stunningly heavy Bugatti Veyron Super Sport so I would bet that the Aventador Roadster will become the car which all open air supercars are compared to…both in the US and around the world.