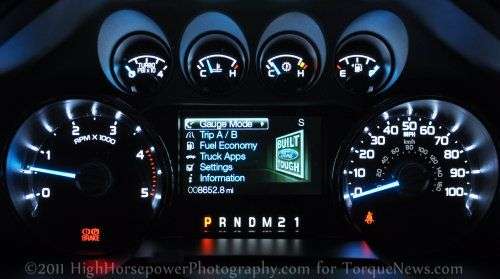 The 2013 Ford Mustang to get Track Apps, special gauge modes

Thanks to some spyshots posted on StangTV, it looks as though the 2013 Ford Mustang will receive the 4.2” information screen previously seen on the Ford F Series (shown on the right), but the mighty Mustang will receive special performance minded gauges and in place of Truck Apps comes Track Apps – including tools to measure the Mustangs performance capabilities.
Advertisement

This 4.2” LCD screen has made its rounds through the trucks and SUVs from Ford Motor Company but when it comes to the Mustang in 2013, it will feature its own collection of tools and gauges to provide a more engaging driving experience. This system will likely be controlled via the buttons on the steering wheel and while this is likely a system that will be standard on the likes of the 2013 Boss 302 and the 2013 Shelby GT500, we have our fingers crossed that this great system will be available on the standard 2013 Mustang and Mustang GT.

The first portion of the revised 2013 Ford Mustang information begins with the Gauge Mode. On the F Series, the Gauge Mode offers a closer look at some of the vehicle measures that are not displayed in the fixed, analog gauges. Things like oil pressure, oil temperature and transmission temperature are shared with the F Series but the Mustang will also get gauges to show the voltage output, boost pressure (likely only on supercharged Shelby GT500 models), air to fuel ratio, cylinder head temperature and inlet air temperature. These offer pretty much every bit of information that the 2013 Mustang owner could want to know about the functioning of their muscle car but Ford went one step further – with an option to open individual gauges in the 4.2” screen that resemble analog gauges.

Next, the 2013 Ford Mustang is expected to come with the Track Apps, using an accelerometer feature to measure the g-forces, acceleration and braking times while driving. Track Apps begins with a basic accelerometer system that shows the various directional forces; side to side and front to back. Next, there is an acceleration timer that measures your 2013 Mustang’s 0-60, 0-100, eighth mile and quarter mile times – complete with a virtual Christmas tree that counts you down to see just how fast your car rips from 0-60 and down the quarter mile. Finally, Track Apps includes a braking feature to show how quickly the 2013 Mustang can go from various cruising speeds down to a dead stop.

We have seen similar systems to the one being offered on the 2013 Ford Mustang on vehicles like the 2010 Dodge Challenger SRT8 and it is truly a great addition. The option to select additional gauges while racing makes the Mustang an even more capable track car and the Track Apps allow the new Mustang owners to measure the performance of their muscle car, as well as being able to see any difference made by modifications without having to wait for the dragstrip to be open.