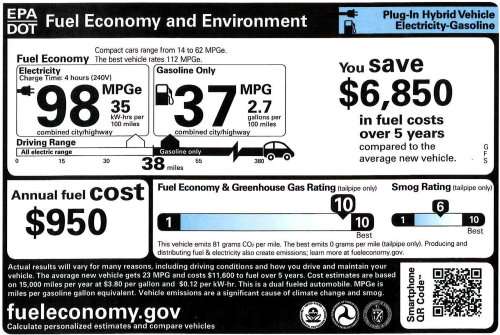 First of all, the 2013 Chevrolet Volt features an increased battery power capacity, up to 16.5 kWh from 16.0 kWH in the 2012 Volt while the available usage of battery energy has expanded from 10.3 kWh to 10.8 kWh. What does this all mean? It means that the battery of the 2013 Chevy Volt can hold more juice and the Voltec drivetrain can use more of that available energy before the range-extending gasoline engine kicks in. This 10.8 kWh window is there to prevent the battery from being drained too far as, when a battery is drained empty over and over – it decreases the life of the battery. These figures are all well and good but what do these increases equate to in real world figures?

Well, the 2013 Chevrolet Volt offers 38 miles of all-electric range, according to the official EPA ratings that will appear on the window sticker. The 2012 Chevy Volt offered an EPA electric range of 35 miles so for 2012, there is an increase of 3 miles range for the new model year. Next, the MPGe (mile per gallon equivalent) has increased from the figure of 94 miles per gallon for the 2012 model year to 98 MPGe for the 2013 Volt. Finally, the overall EPA range when starting when a charged battery and full tank of gas is 380 miles, a small increase of 1 miles over the previous year but a small increase is better than no increase.

The only downside to the 2013 Chevrolet Volt is that here is a slight increase in charge time of a half hour when charging via a 120V port and 15 minutes when connected to a 240V line.

“The best way to explain what we’ve done at the cell level is to compare it to a cake batter recipe. Sometimes if you use more sugar and less vanilla you get a better tasting cake. We’ve done some work at the cell level to modify the ‘ingredients’ to make a better end result,” said Bill Wallace, GM director of Global Battery Systems Engineering. “This attention to detail will allow our customers to experience more pure EV range, which is the true benefit of owning a Volt.”

I should point out that in my time spent behind the wheel of a 2012 Chevrolet Volt, I got between 38 and 43 miles on all-electric power while also averaging a very impressive 109 miles per gallon. Volt owners have repeatedly proven that the EPA mileage estimates are just that – estimates – and in the real world figures may be better with reasonable driving. Mind you, when driving the Volt to get an average over 8 days of 109mpg, I drove the car just as I would my personal vehicles which included highway drives with speeds over 70mph…showing that you don’t need to baby the Volt to get great fuel economy. I would expect that with these increases in EPA ratings, private owners will find even better figures in terms of the all-electric range, overall range and fuel economy.

In addition to the larger and more functional battery, the 2013 Chevrolet Volt will offer the EV Hold Mode. This will allow the driver to force the Voltec drivetrain to run with the gasoline engine running rather than relying on the battery power. This mode is ideal for drivers who leave home with a fully charged battery with the beginning portion of their drive taking place on the highway where electric power is depleted the most quickly. In EV Hold Mode, the range extending engine will immediately provide regenerative charging to the battery so that when you finish the highway portion of your trip – you still have plenty of battery power to drive in stop-and-go traffic where EV mode is the most beneficial and efficient. This mode has previously been available in the European Opel Ampera but this is the first time EV Hold Mode is offered in the Chevy Volt.

The Chevrolet Volt has been the bestselling electric vehicle in the US market through the first 5 months of 2012 and with the improvements to the 2013 model year Volt – we can expect to see the electric Chevy continue to see sales numbers grow.

Tsingshan's Threat to Tesla: EV Maker Is In Battery Crosshairs
Tesla-Funded Research Reveals One of The Biggest Mysteries of EV Battery
END_OF_DOCUMENT_TOKEN_TO_BE_REPLACED