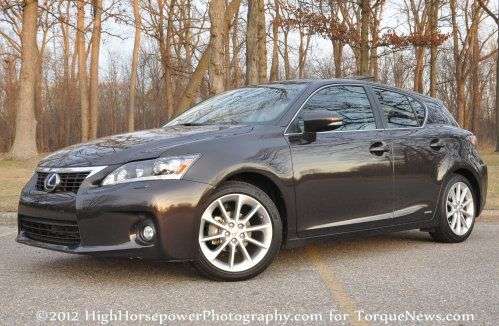 The 2012 Lexus CT200h review: bringing luxury to the affordable hybrid

The key issue facing the hybrid automotive segment in North America is that hybrids can either be affordable or luxurious but with the 2012 Lexus CT200h, a new car buyer who wants the efficiency of a modern hybrid and true luxury amenities can have just that without a massive shock to the savings account – with a price starting under $30,000.
Advertisement

The Lexus brand has grown a great deal over the past few years as there exterior look has become progressively more sporty and aggressive without departing from the overall luxury feel. The 2012 Lexus CT200h shares the basic frontal design cues found on the rest of the current Lexus lineup with a protruding front fascia and bold, angular headlights. Much like Audi, BMW and Mercedes Benz, Lexus has gone the route of sports luxury and that look is pulled off very well on the CT200h. There isn’t much chrome but with chrome badging and a bold chrome strip above the blue-trimmed Lexus crest; there is enough chrome to remind you that this sporty hatchback is luxury car.

The stance of the 2012 Lexus CT200h is wide and low, with wheel flares and some hard lines on the front and rear fascias really bolster the sporty style of this roomy compact. The roofline is swept back, giving the car a very flowy profile and this longer rear roofline allows for a good amount of headroom for rear riding passengers. This design also affords the option of loading a taller item into the rear cargo area. Overall, the exterior of the 2012 Lexus CT200h makes this a hybrid with some attitude – a rarity in the current hybrid industry that focuses strictly on aerodynamics. The CT200h offers economy-boosting aero properties in an aggressive, great looking package and I really like the look of this compact Lexus hybrid.

Inside, the 2012 Lexus CT200h is packed full of everything that you would expect from a modern luxury car beginning with the power, heated front seats that feature side bolsters that help keep the driver and front passenger firm in their seats during stints of spirited driving – accentuating the sporty nature of the CT200h. Our CT200h test car was fully loaded, which includes leather trim throughout with a similar touch of silver trim to what you see on the outside.

One of the most interesting features of the Lexus CT200h is the Remote Touch system, which puts the controls of pretty much everything in the car at the fingertips of the driver or passenger. Remote Touch is a component of the Navigation package and the joystick mounted just passed the end of the center armrest works with the screen atop the dash and a quartet of buttons located around the joystick. The CT200h has all of the traditional buttons on the center stack to control the dual zone climate control system, the entertainment system and items like the defroster system but those Lexus models equipped with Remote Touch can use the retractable LCD screen mounted high on the dashboard to control these features and the Lexus navigation system. As you drive along with your right arm resting on the leather padded center console, the Remote Touch system is just beyond your touch – with a padded unit carrying the menu, map and enter buttons along with improving the ergonomics of the system. Since the nav screen with all of the control screens is mounted so high up and the whole system is controlled by the easy to use joystick; when you are driving you barely have to take your eyes off of the road to look at the navigation map, adjust the HVAC system or change the radio station. It really is a great system with very little “learning curve”. The driver can also control the stereo system, the voice controls and the small screen in the gauge cluster via buttons on the sporty steering wheel. Finally, our Lexus CT200h test car was equipped with the 10-speaker Premium Sound System package and this is one sound system that we would recommend. It offers great sound quality and when you crank it up – this system booms with no depreciation in sound quality.

When it comes down to the basic interior layout of the Lexus CT200h, there is enough room for 4 adults without crushing either the front or rear occupants. For a family car, the driver and front passenger can have loads of legroom with a couple little ones in the back seat but with two adults of average height comfortably seated in the back, the driver and passenger still have plenty of room to keep comfortable. Finally, the cargo area of the Lexus CT200h isn’t as large as what you will find in a full sized wagon but it offers a great deal of space with a “tonneau” to offer some privacy when you don’t want passersby to see what is in your cargo area. Finally, passengers in the CT200h all benefit from the large sunroof and I love a nice big sunroof.

The 2012 Lexus CT200h is powered by a 1.8L 4-cylinder gasoline engine mated to an electronically controlled continuously variable transmission (ECVT) and aided by a high output electric drive motor. This system sends 134 horsepower to the front wheels, allowing the CT200h to dash from 0-60 in 9.8 seconds while also hitting a top speed of 113 miles per hour but more importantly – the CT200h sports a fuel economy rating of 43 miles per gallon around town, 40mpg on the highway and a combined figure of 42mpg. During our time with the compact Lexus hybrid, we averaged right around 41 miles per gallon but that includes lots of highway driving in Michigan’s chilly January temperatures.

While the 134 horsepower drivetrain might not win you a great many drag races, this fuel sipping 4-cylinder hybrid drivetrain easily keep up with the highway traffic and when coupled with the impressive handling capacities – the CT200h is a fun to drive luxury hybrid.

The CT200h drivetrain is controlled by the Lexus mode knob on the center console that allows the driver to select Eco, Normal and Sport mode along with a button for EV mode. Normal is the typical drive mode with “average” throttle control and gasoline engine engagement. Eco softens up the gas pedal a bit, cutting back on the acceleration of the vehicle and adjusting other parameters to improve fuel economy and Sport goes the other direction, improving throttle response and acceleration for a more engaging driver experience.

When driving around the neighborhood, the EV mode allows the driver to pop the CT200h into a pure electric mode (once the vehicle is warmed up) and it will stay in this mode provided you do not exceed 25 miles per hour. The EV mode was also very useful when battling the thick afternoon rush hour traffic of I696 near Detroit, allowing us to traverse the majority of the traffic without using the gasoline engine at all.

While this compact Lexus is designed to offer supreme fuel economy in a luxury car setting, the Lexus Sport mode offers some driving excitement for those who want a little more “go” and aren’t so concerned about fuel economy – after all, even in Sport mode the CT200h still gets far better fuel economy than most of the cars on the road today. Also, unlike many affordable hybrids on the road today, the Lexus CT200h is capable and willing to climb well beyond the 100mph mark when the need arises.

I enjoyed my time spent driving the 2012 Lexus CT200h and I was impressed with both the level of luxury as well as the combination of a sporty ride with incredible fuel economy measures. The CT200h is a very nice, very fuel efficient compact 5-door with room for four adults and a fair amount of storage space out back. In a time when so many hybrids are either ultra expensive or incredibly bare inside, the Lexus CT200h offers a plush, luxorious interior spread with all of the amenities while still allowing a heavy footed driver better than 40 miles per gallon.

If you are in the market for a hybrid that won’t break the bank – with a price starting under $30k, the Lexus CT200h is a great option for the young professional with a new family that still packs some style and street cred with the boys at the bar.