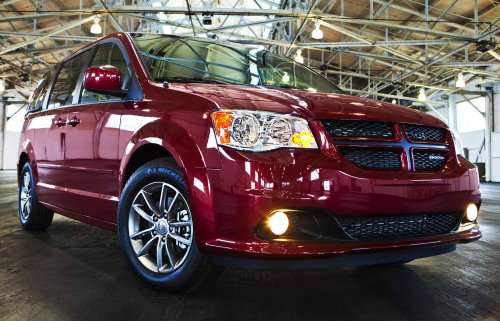 The Chrysler Group has been tossing around the idea of a performance oriented version of their popular minivans for some time and with the introduction of the 2011 Dodge Grand Caravan R/T, company CEO Ralph Gilles’ vision of the “man van” materialized into a production vehicle.
Advertisement

While a great many Mopar lovers will insist that the 2011 Dodge Grand Caravan R/T should be a rear wheel drive vehicle powered by a 5.7L Hemi, Dodge has stuck with a drivetrain that provides excellent power and fuel economy. The 3.6L Pentastar V6 has become Chrysler’s favorite engine – evident by the fact that they have put it in just about everything shy of the Ram trucks and like other front wheel drive applications, the 3.6L V6 in the Grand Caravan R/T produces 283 horsepower and 260lb-ft of torque.

This makes the 2011 Grand Caravan the most powerful minivan in the class but thanks to the new 6-speed automatic transmission and items like low rolling resistance tires, low drag brake calipers and improved aerodynamics, the 2011 Grand Caravan R/T offers excellent fuel economy. In addition to those items, the Grand Caravan R/T features a new driver-selectable fuel-economizer mode which offers the choice of shift points that improve performance or shift points to optimize fuel economy at the flip of a switch.

On the outside, the 2011 Dodge Grand Caravan R/T features some unique features to help it stand out from other 2011 Caravans but the modifications are subtle. First, Dodge added a set of 17” aluminum wheels wrapped in the aforementioned low rolling resistance tires which work with the revised suspension system to give the 2011 Grand Caravan R/T a sporty, comfortable feel – offering what Chrysler recognizes as the driving dynamics of a performance sedan. This suspension setup also has the Grand Caravan R/T sitting about a half inch lower and with the help of the revised front fascia and body-colored side skirts, the Grand Caravan R/T sports an aggressive stance – for a minivan. Finally, the crosshair grille that has become the connecting factor between all new Dodge vehicles features the typical black inner portion but the outer edges are body-colored rather than chromed, adding to the sporty look. The “man van” is available in 8 colors - Blackberry Pearl, Bright Silver Metallic Clear, Brilliant Black Crystal Pearl, Deep Cherry Red Crystal Pearl, Deep Water Blue Pearl, Stone White Clear, Mango Tango Pearl and Dark Charcoal Pearl.

Inside, the 2011 Dodge Grand Caravan R/T features an all-new, 8-passenger all-black interior with black leather seats, steering wheel and shift knob all trimmed in red stitchwork. Dodge next added a premium sound system with 9 speakers scattered throughout the cabin for a theater-like experience with a subwoofer and 506 watt amplifier helping pump out the sound.

Dodge intends to market the 2011 Grand Caravan R/T to the consumer who wants the attitude, style and performance of a sport sedan but who needs the space and versatility of the bestselling minivan in the US market. With a revised suspension setup offering sporty handling and the 283 horsepower Pentastar V6, the new Grand Caravan R/T allows the modern minivan driver to have the room without compromising driving excitement. The “man van” is expected to reach showrooms in the spring of 2011 with an MSRP of $31,430 including destination fee.