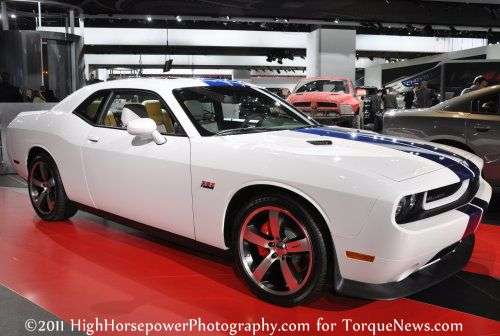 The Chrysler Group has announced that they expect their dealer network to move 1.57 million vehicles in 2011 – a lofty 44.6% increase over the final sales results for the company in 2010.
Advertisement

The Chrysler Group sold just 70,118 vehicles in January 2011, a healthy increase of 23% over the first month of 2010 but 70,000 units a month will not get them anywhere near 1.5 million. This means that they need to move 1.5 million vehicles in the next 11 months – an average of over 136,000 per month. This might seem like an incredibly big request from the dealerships Chrysler has a handful of things going in its favor that could make this goal a reality.

First and foremost, the full scale introduction of the new or revised 2011 models. Even though vehicles like the new Durango and revised Dodge Charger have begun reaching consumers, these new vehicles are still making their way in full scale to the full dealership network.

Once the company has reached a point where they are happy with the availability of 2011 models across the entire dealer network, they will begin a broader marketing campaign to push these new models. The Chrysler Group was able to post an improvement of 17% in 2010 without any new vehicle introductions so, in theory, the dealers should be able to improve on that number with the help of the new and refreshed vehicles.

The other major factory is the introduction of Fiat into the US market. I don’t think that the Fiat 500 is going to move enough units to make a substantial impact on the 1.57 million unit goal but every little bit helps.

Also, considering that the Fiat brand will be operated out of their own facilities that accompany current Chrysler Group dealerships, the new subcompact could create more foot traffic to dealerships. Someone who comes in to check out the new Fiat 500 might find it to not be their ideal vehicle but while they are there, they also have the chance to check out the newest offerings from the other brands from the Chrysler Group. The introduction of Fiat could also help to reach this goal in the use of Fiat architecture in other small cars in the company but that is unlikely to happen during the 2011 calendar year.

On top of new models, revised models and the return of the Fiat brand in the US, Chrysler isn’t leaving everything up to the dealers to reach 1.57 million units in 2011. The company plans on spending 68% more money on advertising and marketing for this calendar year, an increase which was clearly evident to those watching last night’s Super Bowl XLV. Chrysler used the longest commercial in Super Bowl history to advertise the vastly refreshed Chrysler 200 (formerly the Chrysler Sebring) with the help of hip hop superstar Eminem – a commercial which cost upwards of $9 million. We can also expect to see more advertising from television to the internet as the 2011 models hit dealerships around the country.

I have had a chance to drive many of the 2011 Chrysler Group vehicles and even the popular vehicles like the Charger and 300 are heavily improved upon…so if the economy continues its upwards swing there is a good chance that Chrysler could reach their 2011 sales goals.