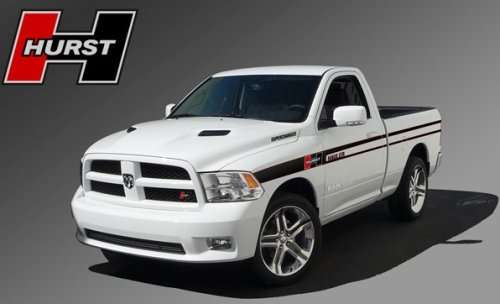 Like all of the Hurst vehicles in the company’s history, the exterior of this customized 2011 Ram 1500 Sport R/T offers simple yet distinct Hurst styling. Hurst begins with a 2011 Ram 1500 Sport R/T regular cab/short bed pickup in bright white and adds the black and red Hurst logos to the grille, tailgate and fenders to create the Hurst Hemi Hauler. Black and red stripes run the length of the truck, starting along the top of the fenders and running to the top of the taillights with the “hauler” name on the doors. The Hurst Hemi Hauler retains the 22” 5-spoke wheels but Hurst adds some model-specific paintwork to make them unique.

Inside, the 2011 Ram Sport R/T interior receives embroidered headrests with the Hurst logo, Hurst floormats and a serialized metal dash plaque confirming the authenticity of this high performance pickup. The Hurst name is best recognized for making some of the performance world’s finest shifters so the 2011 Hurst Hemi Hauler comes equipped with an anodized aluminum Hurst Pistol Grip shifter.

Unlike the 1971 Hurst Jeepster that was predominantly an aesthetics package, the 2011 Hurst Hemi Hauler follows in the footsteps of the recent Hurst vehicles and uses forced induction to boost the power output of the mighty Hemi. The 2011 Ram 1500 Sport R/T comes equipped with the 5.7L Hemi V8, pushing out 390 horsepower and 407lb-ft of torque but Hurst’s announcement of this new super truck mentions that they have added a supercharger and a custom exhaust system to up the power.

No power estimates have been given but based on the packages offered by Hurst for the 5.7L Hemi-powered Dodge Challenger, we can make some estimates. The 2011 Hurst Hemi Challenger Series 4 is powered by the same 5.7L engine, but in its base form the Challenger’s Hemi makes just 375hp; compared to 390 in the Ram 1500 Sport R/T. Hurst then adds a Hurst/Vortech supercharger package to increase the output to roughly 600 horsepower and 550lb-ft of torque with help from a high flow exhaust system. While this may not have any impact on the actual output of the Hurst Hemi Hauler, this gives us an idea as to what Hurst is capable of doing with Chrysler’s 5.7L Hemi.

This initial announcement from Hurst only mentions the shifter, supercharger and exhaust system but it will be interesting to see what else is included this package – if anything. The Hurst muscle cars typically include items like suspension and tire upgrades to handle all of the additional power but with the 2011 Ram Sport R/T already designed to be a good-handling vehicle, other items may not be needed to turn the modern Ram into the newest super truck.

Stay tuned to TorqueNews.com for more information as it becomes available. A big thanks to the folks at Hurst for the information!