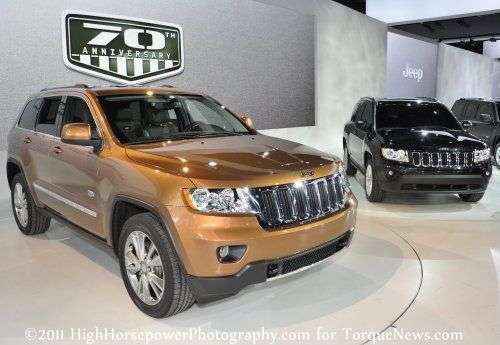 2011 promises to be a big year for the Chrysler Group with the upcoming addition of the Fiat brand and the addition of a huge spread of new models, but even as consumers wait for the 2011 vehicles to reach showrooms, Chrysler saw a 23% improvement over January 2010.
Advertisement

Starting at the 2010 LA Auto Show last November, the brands of Chrysler Group have been rolling out new or vastly revised models with the exception of the Ram brand. The 2011 Dodge lineup is greatly enhanced by the new Charger and Durango, and the revised Avenger, Challenger and Grand Caravan should make for huge gains in sales once they reach dealerships. The same can be said for the 2011 Chrysler lineup with the new 200, refreshed 300 and revised Town & Country and the folks at Jeep are also receiving some refreshed models to help with sales. The problem is that many of these new or revised 2011 models are not yet in dealerships and sales of the 2010 models have slowed dramatically. Even with slow sales from the company’s usual bestsellers, Chrysler Group managed to post a 22.7% improvement over last January, trailing only Jaguar/Land Rover and General Motors in terms of year over year growth.

Chrysler was lead by the Jeep brand in January 2011 in terms of growth, with the Trail Rated lineup showing a 47% improvement over last January. Jeep was lead in terms of sales volume and growth rate by the 2011 Grand Cherokee with 7,612 SUVs accounting for a 130% gain over last year. The Jeep Patriot was 2nd in terms of growth to the 2011 Grand Cherokee with almost 3,500 units showing a gain of 75% over last year. The Wrangler was second in sales with 6,444 units sold and the Liberty was next in line with 4,052 vehicles delivered in January. Jeep can expect to see things continue to improve as the 2011 Jeep Compass hits the market with the new Grand Cherokee-inspired front fascia.

The Dodge brand was second in terms of percentage growth from the Chrysler Group with an improvement of 22% in the month of January. Dodge sales were lead by the Grand Caravan with 7,813 minivans sold for a gain of 82% over January 2010. The Dodge Journey was next in line with 3,973 units sold and third in sales was the Dodge Challenger with 2,526 examples of the retro muscle car heading to consumers. In moving into the third spot, the Challenger saw an improvement of 50% over the first month of 2010 – especially impressive considering that the Chevy Camaro and Ford Mustang both saw substantial declines in sales last month. The most impressive vehicle in terms of growth was the Durango which used its entirely new platform to move around 1,200 units – an increase of 5100% over the Durangos sold in January 2010. Also, even though the production of the Dodge Viper ended months ago, the American supercar continued to sell, as 62 sports cars went out last month compared to just 26 in January of 2010.

The Ram brand was third in growth, with an increase of 18% - thanks entirely to the Ram pickup line. The only other vehicle currently available from Ram is the Dakota (which is also on its way out) and with just 823 small trucks sold, it is no wonder why the Dakota is headed out. The Ram pickup line moved 12,187 units last month for an improvement of 22% compared to January 2010. Ram has not received any of the “new model” love like the other brands but with the Chicago Auto Show set to begin, maybe the brand formerly known as Dodge trucks will have some new models soon.

Chrysler was the weakest of the auto Group that bears its name but like the Dodge brand, Chrysler could be a victim of the “waiting consumer”. Chrysler rolled out the new 2011 300 and 300C at the 2011 Detroit Auto Show and along with the “new” 200 sedan and refreshed Town & Country, the luxury lineup from the folks under the Pentastar can expect to see gains once these vehicles hit the dealership lots but right now, the consumer is still waiting for these new models to arrive. Presumably because of that, Chrysler was one of just 5 brands in the US market to see a year over year decline in sales (of 7%) from January 2010. It should also be pointed out that in January of 2010, Chrysler offered 6 products where right now, they offer just 3. As dealerships transition from the 2010 Sebring to the 2011 200, numbers slumped with the Sebring accounting for 717 units sold and the “new” 200 added another 765. However, the Sebring itself moved almost 3,600 units in January 2010 so the transition appears to be hitting the Chrysler dealerships hard. The Town & Country minivan was the bestselling vehicle with 6,552 units sold and it was also the only product from Chrysler to show positive growth from 2010. The Chrysler 300 (2010 models) were next in sales with just 1,329 sedans sold – a drop of 20% from last year.

In the next two months, more of the Chrysler Group’s 2011 models should hit showrooms along with the full-scale introduction of the Fiat brand so things should remain headed in a positive direction for Chrysler.

LG's New EV Battery Plant Is a Welcome News for Tesla
Tesla Giga Berlin's New Hurdle: It's Not Only the Gov't, but Now Tesla Itself
END_OF_DOCUMENT_TOKEN_TO_BE_REPLACED