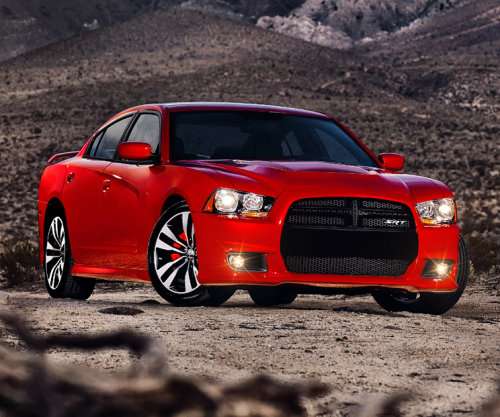 When Dodge introduced the pavement pounding 392 cubic inch Hemi in the 2011 Dodge Challenger SRT8 with more power and better fuel economy than the previous (6.1L) SRT Hemi, we knew that it was only a matter of time before it found its way into another vehicle and today is that day – as Dodge introduces the 2012 Charger SRT8 at the Chicago Auto Show.
Advertisement

The heart of the 2012 Dodge Charger SRT8 is the 392 cubic inch, 6.4L Hemi V8 which, in this application, churns out 465 horsepower and 465lb-ft of torque. That is 40 more horsepower and 45 more lb-ft of torque than the old 6.1L Hemi found in the previous SRT-Chargers and thanks to the active intake manifold and revised camshaft, the new 392ci Hemi offers 80 more lb-ft of torque at lower RPMs. Thanks to the Chrysler Fuel Saver system, this new Hemi offers better fuel economy than the old engine with a combined effort of a multiple displacement system and the new active-valve exhaust system – although no exact specs have been given. More importantly (to the average SRT8 buyer), the 6.4L Hemi allows the new Charger SRT8 to dash from 0 to 60 in under 5 seconds in route to a top speed around 175mph and according to Chrysler, the new Charger SRT8 will be capable of quarter mile times in the high 12 second range, although with the Challenger SRT8 running in the 12.40s with the same 6.4L Hemi (with 5 more stated horsepower), I suspect that number to be conservatively high. My safe money is on the new SRT8 sedan running the quarter in the mid 12 second range in stock form.

The 2012 Dodge Charger SRT8 sends its power to the rear wheels via a 5-speed automatic transmission (the same transmission from the previous Charger SRT8) featuring manual shift control at the shifter and for the first time, the Charger SRT8 features steering wheel mounted paddle shifters. Dodge has included the paddle shifters for those who wish to put their new high performance Charger through the paces on a variety of race tracks, offering multiple shift styles for the different types of racing.

The Street and Racing Technology division of Chrysler has always been about more than just drag racing and the 2012 Dodge Charger SRT8 is no exception. The SRT8 Charger is fitted with monstrous 14.2” front brake rotors and 13.8” brakes out back, all of which are clamped down upon by 4-piston Brembo calipers – providing world class stopping ability for this super-sedan. Helping the Charger SRT8 tear through the turns is a new dual-mode adaptive damping suspension system, which uses a wide variety of vehicle parameters and driver input to enhance the car’s handling abilities and topping off the handling capacity of the new Charger SRT8 is a set of high performance tires wrapped around SRT-unique 20” aluminum wheels. Altogether, the refinements made to the 2012 Dodge Charger SRT8 allow it to pull an incredible 0.88g on the test skidpad (according to Chrysler).

Finally, we get to the aesthetics of the 2012 Dodge Charger SRT8. The SRT division has given the Charger a far more menacing look, with a revised front fascia improving upon the already-aggressive look of the 2011+ Charger. Out back, the rear fascia has also been changed for the SRT Charger, providing a home for the massive 4” exhaust tips announcing the presence of the new 6.4L Hemi. Speaking of the new Hemi, the 2012 Charger SRT8 comes with a revised hood; adding to the muscular look of the car while also helping to vent hot air from around the high performance Hemi.

The 2012 Dodge Charger SRT8 will be built with the rest of the modern Chargers at Chrysler’s Brampton, Ontario production facility and we can expect these high performance sedans to reach showrooms in the fall of this year. We can expect the price and final specifications to be announced closer to the showroom debut of the new high performance Charger and like the new SRT8 Challenger, I wouldn’t be surprised to see the new Charger SRT8 on the dyno – making more than the advertised power.

Check out the gallery below for a closer look at the 2012 Dodge Charger SRT8 and stay tuned to TorqueNews.com for all of your 2011 Chicago Auto Show news!