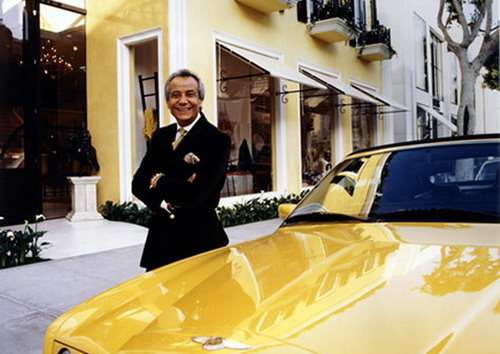 To honor the memory of the illustrious Bijan Pakzad, that passed away last month after a stroke, Bugatti released a special video in which Achim Anscheid, the firm's chief designer, talks about the life and creations of the designer. His last work of art was a bespoke Veyron Grand Sport supercar.
Advertisement

Bijan Pakzad, or better known simply as Bijan, was a famous, Iranian-born fashion designer that saw the light of the day on April 4th, 1940 in the capital city of Tehran. At the age of 33, he left his native country with the precise destination USA, where he was able to open an extravagant boutique, said to be the most expensive store in the world, on Rodeo Drive in Beverly Hills in 1976, where clients are allowed in by appointment only.

Throughout its impressive career, Bijan gave birth to some spectacular pieces of men's clothing and accessories, but he was also involved in creating jewelry and exquisite, racy and adored fragrances for women and men. He was also popular for having dressed public figures and celebrities such as Barack Obama, Arnold Schwarzenegger, Tom Cruise or George W. Bush. But above all his passion for contriving menswear and perfumes, Pakzad was famous for his love for luxury machines. He was the owner of several premium cars such as two Bentley Azure models, a Mercedes-Benz SLR McLaren, a Ferrari F430 Spider, a yellow Rolls Royce Drophead Coupe and a Bugatti Veyron, all of which he used to park in front the Beverly Hills fashion shop.

In the video issued by Bugatti a month after the tragic death of Bijan Pakzad due to a cerebral stroke, the director of the design department of the French, exotic cars company, Achim Anscheid, portrays the fulminant career of the Iranian and the last project he conducted, a one-of-a-kind Bugatti Veyron Grand Sport, that he was never able to unveil in front of the public as planned.

I, for one, am glad to be witnessing this mark of respect for the passionate Bijan, which is described as a hospitable, very kind person with an ever-present sense of humor. Pakzad began his cooperation with Bugatti building on his solid enthusiasm and affinity for luxury and performance cars. The specific yellow color, also known as Bijan Yellow, was to style most of the new bespoke Grand Sport model, as the finished supercar boasts a classy bi-tone paint trim consisting of polished aluminum work, for the front and rear wheel arches, and the above-mentioned Bijan Yellow lacquer job for the mid section of the special edition Veyron.

The logo of Pakzad's fashion house, the Bocca della Verità, is a profound, mystical sign that dominates the front end of the car and gives it a more meaningful appearance when seen running on streets.

The alloy wheels of this Grand Sport edition boast a uniquely-sketched design, that would not be complete without the true Bijan Yellow paint colour. The Iranian designer left his iconic signature on this creation: at the back end, the beautifully-styled black-coloured letters are to be found on the aerodynamic brake. When it's closed, the signature on the upper section; when fully functional and vertically-positioned in the air while helping stop the car from an outrageous speed, the viewers in the cars situated behind will be delighted by the looks big "Bijan" signature engraved on the bottom section of the mechanically-activated wing.

Find out more interesting details about Bijan Pakzad and the opulent Bugatti Veyron Grand Sport special edition by watching the video posted below!