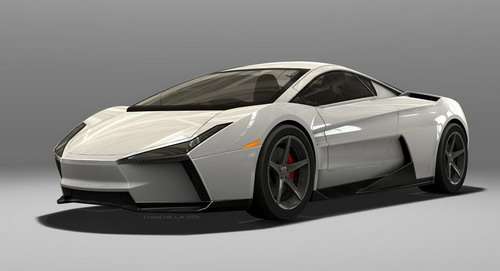 Thought that 1,001 hp is the highest limit for a street-legal car? Well, check out the Mostro Di-Potenza SF22, which packs not 1100, not 1500, but a gargantuan 2000 hp of maximum output.
Advertisement

The Bugatti Veyron - the first modern series vehicle to go past the 400 km/h border. This masterpiece of engineering was ready to eat kilometers asphalt by as early as 2003, boasting an almost ludicrous output - 1,001 hp produced by a W16 petrol engine. That was seven years go... Because the new boss in the neighborhood is the outrageous 2000 hp Mostro Di-Potenza SF22. The Italian title could be translated into English as 'power monster'. The car is the creation of the Pennsylvania-based 215 Racing Inc. company and is in fact the materialization of the Lamborghini Indomable Concept, penned by Daniel Chinchilla as part of a design initiative supported by the Italian manufacturer. However, before the SF22 was labeled for serial production, the artist was asked to refurbish a bit the exterior aspect of the car to make sure it stands out of the crowd with its own personality and people don't get confused by the initial Lambo look.

From reading the press release issued by 215 Racing Inc., we find out that this hypercar took its inspiration from the sleek, aerodynamic F22 assault jet airplanes and that the letters SF stand for "Street Fighter". Moreover, only 50 units will be constructed at the Philadelphia facility at a rate of just two per month. No word on the final value, but I, for one, estimate that the price tag will indicate at least $2,000,000 when the first deliveries to customers are scheduled to happen in mid-2012.

Anthony Crudup, CEO of 215 Racing Inc., feels that it's time the Bugatti Veyron handed the laurels of victory to the SF22. He further expressed: "We think it's time for the Bugatti Veyron to pass the top speed production car crown to us. They have held it for 10 years! But that is not our primary focus, we want to give the owner something that can only come from Mostro and I think we nailed it with this design. Also 70% of all our vendors are American Companies and we pride ourselves on keeping our fingers on the pulse of the newest and most innovative automotive technology the industry has to offer."

Now, let's make the numbers speak for themselves, because they are by far the most delightful part of the car. Technicians were able to build an ultra-lightweight body and chassis made up of a carbon-fiber/kevlar monocoque architecture that weighs under 1,400 kilos (3,000 lbs). The V8 mid-engine features twin-turbocharging and dry sump lubrication. The cc displacement is leveled at 9.4 liters, whereas the staggering output is rated at 2,000 hp. The maximum torque of 2,000 lb-ft is channeled directly to the back-end, 20-inch wide wheels with the help of a six-speed sequential gearbox. The top performance figures indicate a maximum speed of 426 km/h (265 mph) - worth mentioning this is 5 km/h behind what the current Bugatti Veyron Super Sport edition can do - and a quick 0-100 acceleration in just 2.5 seconds. The Mostro Di-Potenza SF22 is fast enough to cover a quarter of a mile in 9.5 seconds starting from zero.

To cope with the immense power of the engine, the SF22 is fitted with monumentally-wide rubbers: 235/35R20 front wheels
and 305/30R20 rear wheels. To ensure a good braking, a wing/speed mechanically-activated aerodynamic brake and 14-inch front discs with 6-piston calipers were installed. Little is still known about the interior, but I discovered that the car is equipped with a high-tech full touchscreen cockpit. That's juicy!