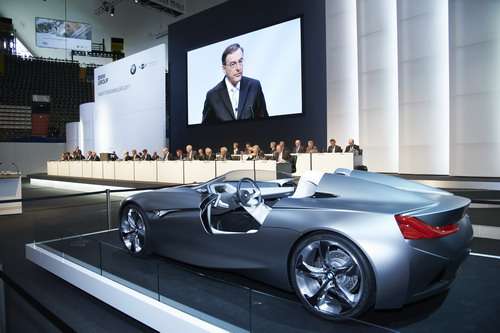 At the Annual General Meeting, Dr. Norbert Reithofer, Head of the Board of Management of BMW Group, reaffirmed the will to solidify the Bavarian brand's top position in the premium segment this year.
Advertisement

This Thursday, the Annual General Meeting of the BMW Group was held in Munich, Germany. As always, the conference was the ideal place to hear a proficient review of the 2010 year and to find out the group's forecast for this year. According to Dr. Norbert Reithofer, the main goal is to set a new profit record and improve the sales targets by over 1.5 million models sold worlwide. The company’s EBIT margin target of more than 8% for the automotive segment also remains in place. Moreover, BMW Group intends to create around 2,000 new jobs in 2011.

Sustainable mobility is one key aspect of the future development of the group, as stressed by Reithofer. In 2013, BMW will launch the i3, the first pure electric city car, followed shortly after by the i8, an extremely fuel-efficient sports car, inspired by the Vision EfficientDynamics concept. The company will also continue to tweak the standard models to become even more efficient - in the present, BMW boasts a fleet of over 50 vehicles with CO2 emissions of 140 grams/kilometre or less. In the future, the carmaker will continue to expand the range of models that are equipped with EfficientDynamics technologies.

The 2010 financial year was the most successful in the company’s history, with the profit sharing reaching a record total level of 7,490 euros, to be taken home by each employee this year. The increased demand in BMW, MINI and Rolls-Royce vehicles, the group will start a hiring programme through the course of 2011, that's destined to create almost 2,000 new jobs, more than half of them in Germany. Quality will be another important goal in the profitable growth, as the BMW Group builds most reliable cars according to ADAC breakdown statistics. An assembly process involving modules and common architectures across the model series means fewer parts and a lower rate, as pointed out by Norbert Reithofer. It was no surprise that the MINI Cooper, the BMW 1-Series, the new BMW X3 and the BMW 5-Series achieved top positions in their categories in the ADAC rankings.