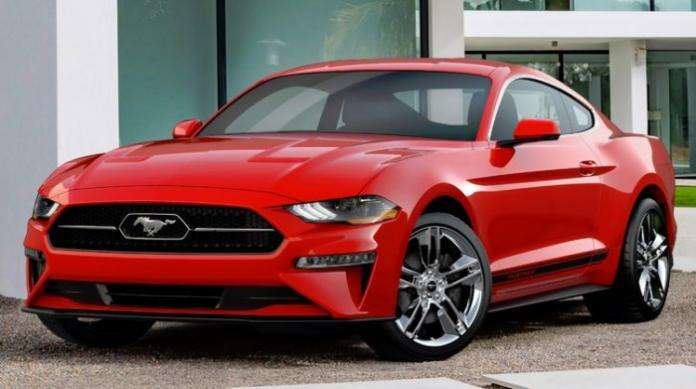 Why Americans Love Ford Mustang: The Best Selling Sports Car in The World

The powerful American Ford Mustang is rapidly becoming the world's favorite and most sellable sports car. More than 150 thousand Mustangs were sold last year in 2016. Thus, the car became the best-selling sports car in the world. The achievement is even more significant considering car sales fell 13 percent in June.
Advertisement

Americans love the Ford Mustang for its extraordinary appearance and the exhaust sound of its engine.

"I love Mustangs, I've always loved them. I love how they sound," tells one owner to a NTD TV, which airs in Russia.

According to IHS Markit, last year, in terms of sales, Ford Mustang outperformed the Porsche 911, the BMW M4 and the Chevrolet Camaro. The manufacturer made a sure marketing move, releasing the 6th gen 2015 Mustang, which can be assembled with both left and right-hand drive.

"Not surprisingly, one-third of the Mustang sales are outside the United States. They are loved in Europe, they are loved all over the world," Scott Keller, the curator of Exhibitry at the LeMay America's Car Museum tells NTD TV.

Take Canada for example. As Automotive News reports, "Ford’s blockbuster month (in Canada) was driven entirely by trucks, with F-Series setting a June record, Explorer sales almost doubling and Escape up 23 per cent. While Ford car sales declined nine per cent, one interesting anomaly is that the Mustang (a sports car) found more buyers in June than did the Focus (a mainstream compact)." As we can see in one of Canada's top auto sales websites Kijiji, there are no shortage of choices of options when looking for a Ford Mustang.

There are fans even in Asia. For the former Chinese race car driver Richard Guo this car literally sank into his soul. In 2011 he even decided to establish a Ford Mustang fan club in Beijing, which already has 3,000 members.

"After buying my first Mustang every time I think about changing cars, I feel that other cars do not have such a great design, or too light a steering wheel, and there is no driving pleasure. Only "Mustang" is the best for me," says Richard Guo, founder of the Ford Mustang fan club in China.

This year, Ford plans to ship the Mustang model to 140 countries, including China.

In fact, the pricing and the specs of the 2018 Mustang are already available at TorqueNews. Also see this interesting chart on how modern Ford Mustang 0-60 times have improved over time.

Alen wrote on July 28, 2017 - 9:59pm Permalink
Ford Mustang is a good looking sports car. It looks very unique. I know Dodge Challenger and Chevy Camaro have their uniqueness too, but there is something really different about Mustang. I don't know what it is. Does anyone know?
Don wrote on July 28, 2017 - 10:40pm Permalink
3 reasons I like Ford Mustang. First, because I can't afford a Lamborghini. Second, because I can't afford a McLaren P1. Third because I don't don't really care for the first and second and like Mustang more than Lamborghini and McLaren P1.
Sean wrote on July 28, 2017 - 11:08pm Permalink
Mustang is one of my favourite cars since I was in high school. I was going to buy a Honda Civic, which would have cost the same as a v6 Mustang. So, I bought the Mustang instead. I really liked the new s550, as it's handled better and looked great doing it.
Darren wrote on July 29, 2017 - 4:20pm Permalink
Mustang is amongst top 5 in search on autotrader.ca.
CLN wrote on August 20, 2017 - 1:58am Permalink
The Mustang is not a sports car. It's a muscle car. Sports cars have two seats, front engine and rear-wheel drive. Mustang only checks two of those three boxes. How can you trust an automotive author who doesn't even have basic automotive knowledge?