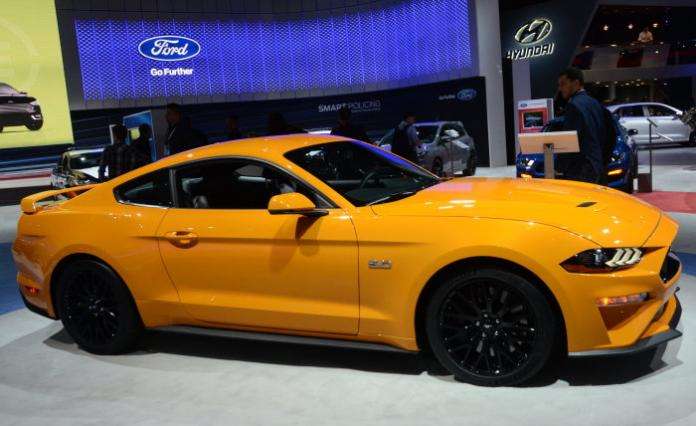 The 2018 Mustang configurator has gone live on Ford.com with full pricing, showing that in addition to becoming more powerful, the new pony car is also becoming a bit more expensive – with the 2018 Mustang GT Premium price increasing by almost $2,000 from the 2017 models.
Advertisement

We learned earlier this year that the 2018 Ford Mustang is getting a new look, new technology and more power from both of the available engines (the V6 is gone), but we didn’t get any information on pricing. Fortunately, the “build your own” page on Ford.com for the 2018 Mustang has recently gone live and thanks to that, we have full pricing on the refreshed pony car.

Base Prices Up, EcoBoost Prices Down
As we mentioned above, the 2018 Ford Mustang is not available with the base V6 engine from the 2017 lineup, making the 2.3L EcoBoost 4-cylinder the standard, entry level engine. The 2017 Mustang with the V6 was about a thousand dollars less than the 2017 Mustang with the EcoBoost, so as you might have guessed, the demise of the V6 means that the 2018 Mustang has a higher base price.

However, even though the base price of the 2018 Ford Mustang is higher due to the EcoBoost engine becoming the standard powertrain, the 2018 Mustang EcoBoost fastback costs less than the 2017 Mustang EcoBoost fastback, which starts at $26,198. In other words, the EcoBoost Mustang is less expensive for 2018, but as the base package, getting into an entry level Mustang costs more in 2018 than it did for 2017.

It should be noted that for the 2017 model year, the EcoBoost engine is only available in the Mustang convertible in Premium trim. That package is still available for 2018, but the price list above is for a new base model EcoBoost convertible. The 2018 Mustang EcoBoost Premium convertible has a starting price of $36,100, up $405 from 2017.

V8 Pricing Climbs Across the Board
While the some of the pricing for the 2018 Ford Mustang with the EcoBoost engine have dropped, prices are up across the board for 2018 Mustangs with a V8 engine.

Below is a simple chart showing the 2018 Mustang prices followed by the 2017 pricing in parenthesis and the difference led by a plus or minus depending on whether the price went up or down for 2018.