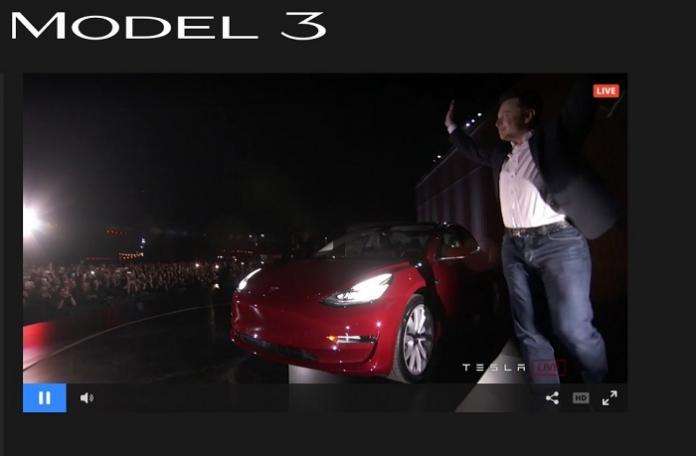 When you go to Tesla.com it redirects you to https://livestream.tesla.com/ where investors and Tesla Model 3 reservation holders can watch it live now.
Advertisement

But those who would like to watch the Model 3 handover live stream must sign up on Tesla's website to be able to watch the event live. Previously it was thought that Tesla will air the handover party live at its Events page at http://ir.tesla.com/events.cfm. Thus, many investors and Model 3 reservation holders would go there and keep refreshing the page. But Tesla had different plans.

Now if you go to Tesla's front page at Tesla.com it automatically redirects you to the sign up page where you can watch the Model 3 handover party live. It requires the first name, last name and the email address.

However, the situation is different for Tesla employees. The company has sent its employees a special email with special instructions in it. What's there we don't know. If a Tesla employee reads this and would like to send us a tip (unless it's confidential), TorqueNews would appreciate it.

The message there for Tesla employees reads this: "Tesla US Employees. If you already have a reservation, please check your email for instructions on how to order."

The events starts to live stream any moments now.

It appears that thousands of people are present at the live event.

Interesting facts are shared about Tesla. "No one has an office at Tesla. Not even Elon Musk."

They had a broadcast from the Gigafactory. Now they are showing the assembly line of Model 3 of Fremont CA factory. They are giving a sense of what is is like to be in the factory.

Tesla does almost everyone in the house. They built not only the powertrain, but also the paint and some other details. Creative and problem-solver teams are working hard on the Model 3.

An 11 years old girl is talking about her idea of doing Tesla commercial competition called Loveday. Telsa now plays the top 3 commercial ideas from fans. Twitter fans voted on them. They announced the winner.

That concluded pre-event show and soon Elon Musk is going to take the stage.

Elon comes to the stage with count down. He came with a red Tesla Model 3, driving. He says the future is now. Autonomous driving will allow you to watch movies and talk to friends while the car is driving. They tried to make the car smaller looking from the outside and bigger in the inside.