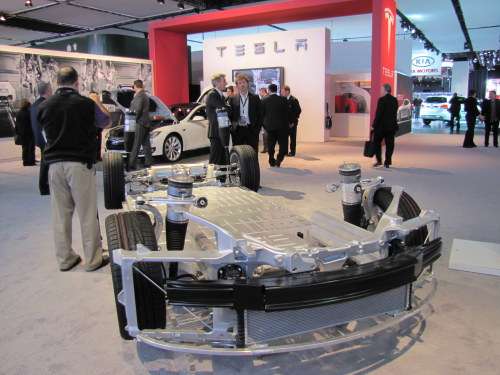 Tesla Stock lost 3 percent after a word came out that NHTSA is reviewing suspensions complaints in Tesla Model S Cars. What does this mean?
Advertisement

Update: On June 9 Tesla released this response, which is a detailed blog post clearing a few things about the supposed safety of Model S suspensions.

This afternoon Reuters broke this story, in which it claimed that the National Highway Traffic Safety Administration is reviewing reports to decide if it's going to start a formal investigation in Tesla Model S suspension complaints.

Bryan Thomas, a spokesman for the National Highway Traffic Safety Administration, said the agency is "examining the potential suspension issue on the Tesla Model S, and is seeking additional information from vehicle owners and the company." The review is a step before the agency decides whether to open a formal investigation leading to a potential safety recall.

I don't know if this is related to the vibration issue that has been talked about, but at this point the NHTSA is not formally investigating Tesla Model S suspension. They are asking around to see if there's anything to investigate. As you can get from the Retuers' quote, "the review is a step before the agency decides whether to open a formal investigation leading to a potential safety recall."

According to CNBS it's one owner. Tesla had entered into a "troublesome nondisclosure agreement" with a Tesla Model S owner who had suspension problems, CNBC reports.

Overall, this would only do Tesla Model S owners good if something does come of it. You don't want your Model S wheels to snap off one day due to rust or degradation if this becomes justified. Or worse, you don't want any lose of life.

I don't know what materials Tesla selects for its cars. I like the company and the car, but as one Tesla Model S owner put it, "assurance that things will last, is good."

Toward the end of the trading day Tesla Stock (NASDAQ: TSLA) lost 2.62 percent of its value and went south even more, losing another 1.24 percent in after hour trading at the time of this writing. TSLA ended the trading day at $229.34.

If you are a Tesla Model S owner, have you ever experienced any suspension problems? Please leave your opinion in the comments' section.