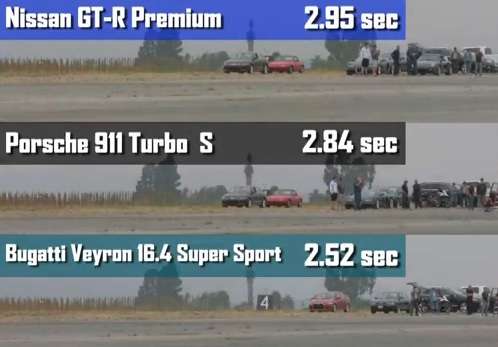 Here are three candidates for cars that are capable of developing 0 to 60 miles per hour speed in under three seconds: Nissan GT-R vs. Porsche 911 Turbo S vs. Bugatti Veyron Super Sport. Let's see which one does better.
Advertisement

The American magazine Road & Track took the chance to elect the cars of the "Club 2 seconds" of cars that is capable of devouring the 0 to 60 m/h in under three seconds. Not surprisingly the Bugatti Veyron Super Sport did the best, shown in the accompanying video.

All aim for the top speed. While the speed that they aim for, is not much relevant for an average driver, what matters is the speed of acceleration. How fast can these cars accelerate from 0 to 60 miles per hour and on.

All of these cars have all-wheel drive. They drive like a rocket and, as shown in the video, accelerate with a bang. They don't have to worry about keeping a straight path. They are made to accelerate and go fast.

Nissan GT-R and Porsche are far beyond the Bugatti Veyron Super Sport. Yet, they are relatively close. Consider Veyron's MSRP price of 2.5 million dollars with the prices of GT-R and 911 Turbo S. Nissan GT-R price starts at 89,950 dollars. The 2012 Porsche 911 Turbo S base prices is $160,700.

Thus, if one considers the performance, Bugatti is the winner. However, taking into consideration the pricing this test is an enormous satisfaction first Porsche and primarily for Nissan for being much more affordable then its competitors.