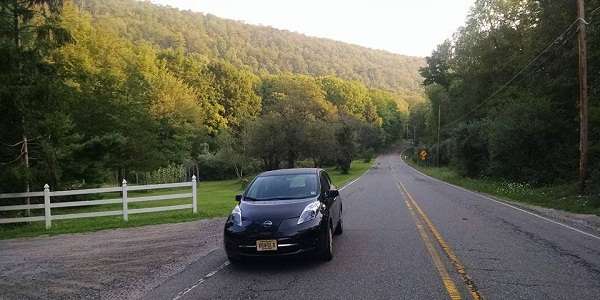 Today I was reading a public forum on SF Bay Nissan Leaf Owners group on Facebook, in which one Leaf owner fills that Nissan should compensate him for his battery going to 8 bars at 58K miles. Some owners suggest that his dealer should advocate for him. Should Nissan compensate in this case?
Advertisement

"Just got a call from Nissan Consumer Affairs. They have decided to give me nothing , not one dime, for my battery that went to 8 bars at 58,000 miles and 3 weeks past 5 years. How is this company serious about the electric car market when they treat their early adopters like this? I also had to pay the dealer a couple hundred dollars for the battery report and go through a lot pf phone calls and periodic updates from NCA. It was all theater. I am committed to electric cars. We have two LEAFs, one leased and this one owned. We have two home EVSE and solar panels. I won't buy an ICE car again however I will also not be buying Nissan. I recommend others to stay clear," wrote Bill Tomkovic in SF Bay Nissan Leaf Owners group.

When some Nissan LEAF owners suggested him to contact the local TV station to make his voice heard, he replied that the TV will hardly be interested and "maybe I should contact Chevy so they can use the battery degradation issue against their competitor. in their promotions," Tomcovic wrote.

Ivan Jue
Tried that angle, as I went to a Volt from the '11 Leaf. I also spoke to several GM executives last October--GM won't go down that road. They were curious and tried a prototype battery with the Leaf chemistry, wondering how it can work without TMS in hot weather. The answer is--not well.

Jue also added: "Actually, there is a way. Chevrolet is pretty active in FB and the GM-volt forums. They have been very aware that I transitioned from the Leaf to the Volt. I've also helped contribute to a few of their online ads--here's one from last year."

Doug Arens
Which dealer did you take it too? Nick at Nissan Sunnyvale fought for me and got 100% battery replacement even though I was 300 miles over 60k. Nissan Customer Affairs were jerks! If it was up to them I would have got zip. I recommend everyone go see Nick at Nissan Sunnyvale. Dealerships have more power than you think.

Bill Tomkovic
I went to the dealership in Petaluma . My car won't make it to Sunnyvale without taking all day. What's in it for them if I do make the journey to Sunnyvale? I didn't buy the car there.

Doug Arens
I bought my Leaf in Napa! I drive all day to Sunnyvale Nissan because it's a high volume Leaf dealership and reputation means everything! Nissan knows this. When a high volume dealership like Nissan Sunnyvale calls Corporate and says "authorize battery replacement" Nissan listens. Because Sunnyvale sells hundreds of Leafs.

Jeff Leeds
Just so everyone is clear, all electric cars on the market today including Tesla, Bolt, Leaf use the same type of battery technology, this is going to happen to any car. However, it does seem that there is more about this on the Leaf than the Volt.

Jose Gandullia
The others have an active battery cooling system. In 2015, instead of adding a cooling system, Nissan introduced the "Lizard" battery which is supposed to be more tolerant to heat. Time will tell.

Jeff Leeds
If you have not had a discussion with the Nissan Corporate rep you should. It probably will not make any difference, but you have the right to speak to the district representative about this, and if I were you, I would.

Bill Tomkovic
I will try that. Thank you.

Marc Fontana
Please don't give up. I've heard of at least one person who was 6 weeks past the deadline when he lost the 4th bar. He was able to negotiate a partial re-imbursement (75%) from Nissan for the battery replacement. It shouldn't matter what dealership, since the warranty has to be approved by Nissan. Why would should Nissan cover part of his cost and not yours. Doesn't seem right.

David Laur
Sorry to hear that Bill and it comes as bit of a shock. There are numerous reports of people in your situation that were given huge discounts for a replacement battery including one guy (details are fuzzy) who was also was over his 5 year mark but well under the 60,000 mile range who got 50% discount for a new pack.

Up to this point; you have played fair but now its time to take a different tact. I would start talking to the media as much as possible. Several online media agencies do take user submitted stories. Write up your experiences including steps you took to get to this point. The more you do it, the more likely Nissan will do something to find a middle ground.

Bill Tomkovic
Having to go to the media or shop around for a dealer advocate is not a substitute for good faith behavior by Nissan.

What do you think? How should Nissan act in this case?

RobSez wrote on September 24, 2016 - 6:07am Permalink
Situations like this make a strong argument for leasing over buying. At least until the battery technology issues have been solved. One of the pitfalls of being an early adopter is the likelihood of having to navigate problems like this. I think if escalating the problem with Nissan above the dealership level is the best course of action. Then it's probably time to involve local consumer advocates and media.
Seth T wrote on September 24, 2016 - 10:11am Permalink
I have a 13 leaf that just dropped to 9 bars battery health at 41000 miles. It's never been fast charged. And the car has been in North Carolina or Virginia its whole life. No extreme temperatures. I bought it used 1 year ago at 22000 miles on the odometer and 11 bars of battery health. The build date on my leaf says 3/13 so I'm guessing i have until 3/18 for the warranty to expire. I'm really expecting to see a battery replacement under warranty.!
ZEOG wrote on September 26, 2016 - 3:39pm Permalink
Sorry to hear their story. We have had exceptional Nissan service for both our 2012SL Leafs. We love them and we sold a Plug In Prius to by another Leaf a few months ago. Best cars we have ever owned albeit it does have limited range it suites our daily commutes to a T. Thanks Nissan. No gas for 5 years now. Buy the EV that bet suites your needs.
Sreekanth wrote on September 28, 2016 - 10:42am Permalink
I agree with the article, I was lucky and fortunate to be able to get a battery replacement just few days before expiry. Nissan screwed early adoptors bigtime, 1) Low power Charger (3.3kw), 2) Bad Battery 3) Non-efficient A/C & Heater 4) Doesn't allow Upgrade to 30Kw battery. I have already decided never to pursue Nissan and passing the message all along .
mike w wrote on October 13, 2016 - 7:32pm Permalink
Sorry to hear about that. I live in Northern Virginia and our 2011 Leaf lost its first bar at 3600 miles. ( three thousand six hundred). The local dealer told us "Capacity loss is normal and expected" they would do nothing. Same response at Nissan. Its covered by a warranty tied to the dash board meter that is not accurate at all. By the time I had 11,000 miles on the car we were down to 40 miles on a full charge and nothing from Nissan except double talk and lies from a wall of lawyers.. We got our settlement check this week. $50 for the failure of a $6500 battery. Will never buy another Leaf or Nissan as long as I live.