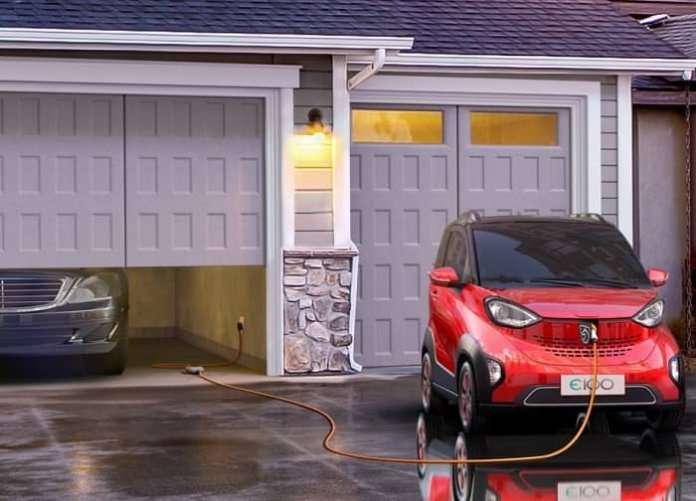 Baojun E100 is the cheapest electric car in the world so far and GM is selling it in China for 5,300 dollars. Why can't GM somehow organize its production in the United States and sell it for $5,300 in the US?
Advertisement

2017 Baojun e100 is a small electric car, but it has an impressive range for its price. It goes 96 miles per charge, according to General Motors.

This is the cheapest electric car in the world so far. The price of the 2017 Baojun e100 is actually $14,000 before the incentives. But apparently China has great incentives for electric cars because it will be sold to the public at a price of $5,300 after the incentives.

Baojun e100 looks like Smart. But in this case its visual similarity to Smart is much less important than the price, which automotive reporters have already called the chepaest electric car in the world so far. While the car is small, it can comfortably accommodate two adults.

GM started selling e100 two days ago through its SAIG-GM-Wuling partner. However, in July the company had limited pre-sales (I guess like Tesla Model 3 reservations), in Liuzhou, Guangxi. According to GM's release "more than 5,000 people registered for the first 200 vehicles." As of yesterday GM made another 500 cars available for sale and I should note that GM is moving more aggressively than Telsa with Model 3. This is my personal opinion.

Some Specs of Baojun e100 EV

The 2017 Baojun e100 is a very good and inexpensive choice for the Chinese urban commuters. For the above-mentioned price it has Wi-Fi, 7-inch screen, infotainment system and a keyless entry. GM says the lithium-ion battery pack can be fully charged in 7.5 hours and its capable of capturing energy through a regenerative braking system.

96 miles per range is very impressive. Even if GM sold it here in the United States of its original cost of 14,000 dollars (that's the price in China before the government incentives) it's really worth it. I mean the current Nissan Leaf only gets 107 miles per charge and costs $30,000. And the 2018 Nissan Leaf is expected to have only 150 miles per range, which has already disappointed some Leaf enthusiasts.

Why don't GM executives market these cars with these prices in the United States?

I understand that cars like Baojun e100 if brought to US need to pass safety regulations and crash tests, but I think they are not too different from the Chinese safety regulations. Even if the US safety regulations and standards are stricter perhaps with some improvements that understandably would add to Baojun e100's price it could still pass the US standards and be marketed here in the USA. That would give GM a chance to fully revolutionize the US electric car market. I am sure GM understands this too. They either have a plan or the cost of production may be too high in the United States, which will add to the cost of meeting the safety standards in USA. But this is a huge big step as China is the largest auto market in the world. Before too long we should see prices coming down in the United States too.

Paul GOVAN wrote on August 11, 2017 - 3:16am Permalink
At last - a journalist/commentator has the sense and cojones to state the obvious re the E100 ! Even at circa $8000 it would be a surefire winner. You have to conclude that carmakers just don't want to see low-cost EVs like these succeeding in the so-called West. But which would YOU rather buy: the $10,000 one-seater Renault Twizy or a very..er..smart-looking 2-seater E100 at $8000 ? (The latter is also faster and has nearly twice the range)
Armen Hareyan wrote on August 11, 2017 - 9:32am Permalink
Thank you Paul. I think the lower priced electric cars will eventually come to the west. At least that's the trend we will see.
bruce dp wrote on August 23, 2017 - 6:04am Permalink
An interesting read. Thank you. Bottom Line: What would be GM's incentive to sell this China-made EV outside China? IMO, in the U.S., not much. Assumptions: add US$2000 to the $14k price for shipping to the U.S. + red tape. Now, it is a $16k EV that has ~100mi range, and a top speed of ~60mph. Until it is crash tested, it can only be sold as a slow ~30mph neighborhood EV (nEV). Let's assume after several crash tests it passes with a high enough rating to be sold in N. America (add $100k of crashes to GM's cost to bring it to market). Now, here are some tricky points. What will the insurance companies' rate be for such a low rated crash tested car? Lets assume, the insurance rate is not bad enough to deter a buyer. Next, marketing it with competition in mind. Not competition from other companies, but with GM's own products. That $16k EV will steal market share from GM's profitable fuel-cars (ice) in the same price range (not good for GM's profits). As well as from GM's Bolt EV and Volt hybrid sales. More stumbling points. A major one being what will U.S. Labor Unions think of bringing in a cheap car they did not make? (they are not going to like it, and likely already have an agreement with GM not to do so). Then, there is the automaker's ego to include. GM has always been known for fine cars. We know this not because of what junk, er ... products they sell, but GM tells us so, repeatedly, in their daily advertising. Now what is a Big Automaker to think of selling a cheapo EV made in China? It is not likely GM wants to be thought of as the Walmart of automakers (egotistical bragging rights is a big deal to automakers). Personally, I agree with the writer, and also think it would be good to bring their low-cost EV to N. American markets. But sadly, if we look at how badly GM has sold its Bolt EV, GM would fumble the selling of this EV as well. Lastly, if GM were to bring this EV to sell here, I would like to see some options offered that approved-OEMs could install: -cruise control -level-2 6kW charging (upgrading the on-board L2 charging to 6kW) -level-3 DC charging - +more The options could open up a whole new market for add-ons (similar to what people did to the early PCs). Buyers would buy a cheap base EV, love driving it, and then show that love by adding to it. Sadly, automakers like GM try to get in on some of that profit and screw it up because dealer's service departments don't like a non-uniform product (OEMs don't care). So, lets keep hoping and dreaming it will happen (but don't hold your breath).