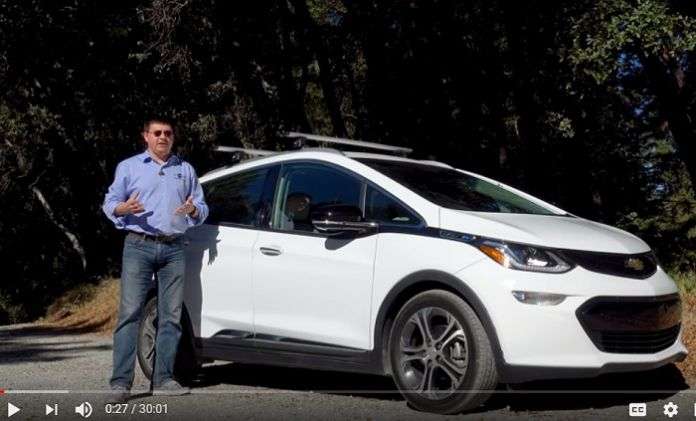 With 238+ miles of electric range, an affordable sticker price and better acceleration than your average compact hatchback the Bolt is the first no-compromises EV in America. There may be snazzier EVs, there may be faster EVs and there may be more comfortable EVs, but none of the other options offers the blend of features, price, range and of course universal availability that we see in the Chevy Bolt.
Advertisement

Alex on Autos produces excellent car reviews. "I disagree with one comment though about level 2 charger being required. It is not required and the fact that the Bolt has a bigger battery makes it less of requirement not more," writes Dan Car who posted this video review on Google Plus.

If you only typically drive less than 40 miles round trip a day or if you have level 2 charger at work, you don't need one at home.

Also See Some Other Interesting Stories About Chevy Bolt

My Biggest Shock When I Test Drove Chevy Bolt
Jennifer Sensiba, a group member from Las Cruces, NM wrote about her biggest shock and the negative when she first tested the Chevy Bolt. Here is her post below.

After 3 Years of Nissan Leaf Now Chevy Bolt and Comparison
David Fox from Los Angeles, who leased a 2015 NIssan Leaf and moved to Chevy Bolt after his lease was over, posted in SF Bay Area Nissan Leaf Owners public group on Facebook about his experience driving both cars. He has a very interesting comparison of Nissan Leaf vs Chevy Bolt and the group being publicly available TorqueNews decided to share it here for our readers.

Initial Drive Review: 2017 Chevy Bolt effectively mainstreams E.V.
General Motors has experimented with electrifying the car for decades, and has enjoyed some market success. Presently, the Chevy Volt hybrid drives the streets of America, and Volt owners interviewed respond with positive accolades, with a caveat or two -- they want more electric only range, and bigger, would be better -- Bolt presents both.

Chevy Bolt vs Chevy Volt
Is the Chevy Bolt going to cannibalize on Chevy Volt sales? It seems like GM is actually competing with itself when you look at the deliverables of these two vehicles in my opinion. At the moment, we have 40 to 50 miles of electric range with the 2017 Chevy Volt and 240 miles of EV Range in the Chevy Bolt.

What Makes Chevy Bolt Grow in Popularity
Few days ago when August 2017 sales numbers came out there was a little surprise. In August 2017 plug-in EV sales Chevy Bolt leads. "In August, Chevy delivered 2,107 Bolt EVs, the first time the car had sold more than 2,000 units in a month after entering the market in mid-December last year," reads the article leaving behind Toyota Prius and Nissan Leaf.

Chevy Bolt vs Tesla Model 3 on Specs Alone
Tesla's first mass-market vehicle, the Model 3, is expected to go head-to-head with the Chevrolet Bolt, which falls in the same price category and mileage range. Despite the fact that the Model 3 and the Chevy Bolt are marketed to very different demographics, their specs tell a different story.

Reid wrote on November 10, 2017 - 10:36pm Permalink
Needing a Level 2 charger for Chevy Bolt depends on how much you are driving it each day compared to how long you can let it trickle charge each day/night.
Uri wrote on November 11, 2017 - 6:50am Permalink
I use level 1 charger for my Chevy Bolt at home. I don’t drive more than 40 miles a day and level 1 over night is way more than enough. Plus, there are numerous places around town I can plug in if I really need to drive. Unless the daily drive is more than 100 miles a day Level 2 isn’t absolutely necessary.
Frost wrote on November 11, 2017 - 6:52am Permalink
I lived with level one charger for several months, but I drive my Bolt a lot in rural America so level two made life much easier. Now with Uber I drive 150-200 miles a day and can write off the charger as a business expense.