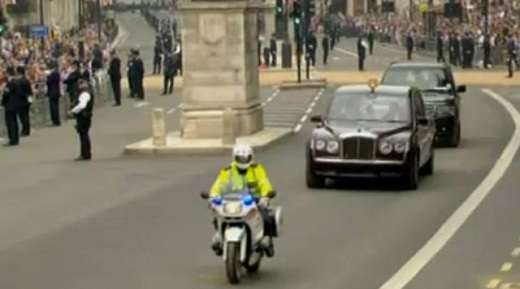 The number of the open-top Aston Martin read "JUST WED," on license plate. It also had balloons fluttering from the back bumpers of Prince William's father's Aston.

It would be normally expected that Rolls Royce, Bentley, Jaguar or even Aston Martin would have lead the procession of the Royal Wedding of Kate Middleton and Prince William to the Westminster Abbey, but rather, it was BMW.

Indeed, this time the princely Rolls Royce was overtaken by the BMW R 1150 RS to lead the Royal Wedding to Westminster Abbey. The reason is simple, BMW R 1150 RS is a motorcycle, which opened the route through the streets of London during the Royal procession.

Millions of viewers were watching the Royal wedding ceremony on TV and hundreds of thousands made a procession through the streets of London from the Westminster Abbey to the Buckingham Palace. Nearly 1,900 prestigious guests and dignitaries were invited to the wedding. British pride Rolls Royce, Jaguar XF, Bentley and other luxury car models "were responsible" for transporting the Royal Wedding guests.

Normally it is the Sprint GT 1050 that is used often for law-enforcement purposes. One would expect this model being used to lead the motorcade of the Royal procession. However, the London police chose

Not this time. The law-enforcement today used not even the the new BMW K 1600 GTL, but rather 1150 RS, which lead the Royal procession through the streets of London.

In fact, BMW 1150 RS is already widely used by the U.S. law-enforcement in number of states. BMW has already manufactured over 80,000 police motorcycles that are in service worldwide. The authorities in the United States started using BMW motorcycles only in the recent years. The transition to BMW motorcycle usage was largely stimulated by the California Highway Patrol (CHP). In 1997 CHP supplanted its Kawasaki and Harley-Davidson motorcycles with BMW R1100RT-P and R1150RT-P motorcycles on CA highways and interstates.

Wedding organizer wrote on August 4, 2011 - 3:49am Permalink
A wedding is the ceremony in which two people are united in marriage or a similar institution. Wedding traditions and customs vary greatly between cultures, ethnic groups, religions, countries, and social classes. Cris