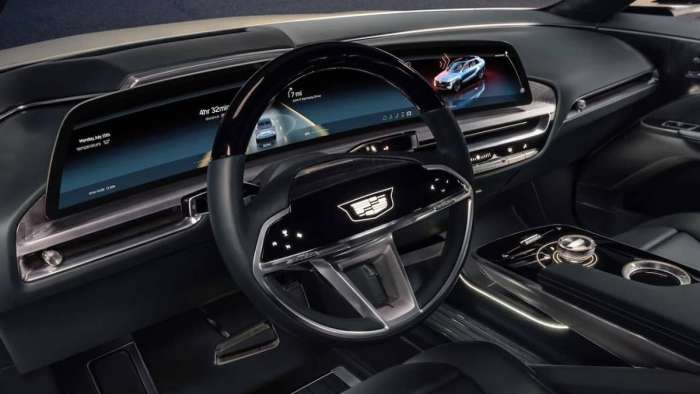 2022 Cadillac Lyriq: A Nice Looking Car, But Too Little Too Late To Sell

GM and Cadillac have some great engineers and designers, but their product planners and marketing teams seem to be clueless. I like the recently revealed 2022 Cadillac Lyriq's styling, plus they have very cool technology shown, combined with a beautiful interior design. Which are all hallmarks of Cadillac’s best selling traits. But looking at a 2022 release, the Cadillac Lyric looks to be providing too little, too late.
Advertisement

Clearly GM was targeting the Tesla Model X, Jaguar iPace, Audi ETron, and Mercedes EQC, when it designed the Lyriq. But even though the iPace, EQC, and ETron were many years sooner to market than the Lyriq's 2022 debut, the European BEV crossover/SUVs have already proved to be poor sellers in their markets when compared to both ICE rivals and BEV competitors. Some of the European EV SUVs were even withdrawn from sale because the automakers could not get enough batteries for even the tiny production numbers being built.

GM is probably congratulating themselves in delaying the Lyriq and Hummer's production until their new Ultium/BEV3 drivetrain and mass production LG battery factory will be completed. This will ensure needed battery supplies, lower manufacturing costs, and provide competitive EV range and performance. Even though the Lyriq's originally planned 100kW battery pack seems to have been increased to 150kWh, the lower energy density of the Ultium batteries (built more for their low cost than performance) will only provide the Lyriq with something over 300 miles of EV range (in 2022). Today, the $80K, 100kW, Model X provides 351 miles of range (using Panasonic's last generation of batteries) and the $50K, AWD, Model Y provides better than a 300 mile EV range with only HALF the battery pack capacity of the Lyriq.

I was drawn into my love of EVs by the Chevy Volt, which offered great value when it was released. After leasing the Volt I ended up buying one, and later bought a Cadillac ELR plug-in hybrid. I was impressed by the capabilities of the Volt, and the ELR took the Voltec drivetrain to new heights, adding a wonderful, plush interior, stylish body, and every cool electronic gizmo that you would wish for. The Cadillac ELR is a wonderful car for cruising or commuting.

Cadillac's $76K starting price was originally targeting the Tesla Model S, and their marketing team had dreams of competing against the far more expensive Fisker Karma, and exotic BMW i8. But the fact was that the ELR had a shared Voltec drive train with the $40K Chevy Volt, and Cadillac's odd marketing only confused potential buyers. This made the Cadillac ELR one of the most notorious automobile (and EV) failures of all time. Looking back on the ELR, I think that if Cadillac had added the performance improvements that the final 2016 models included (getting the ELR almost 3 full seconds quicker to 60 MPH than the early model), and if they had introduced the ELR competitively, starting under $55K (even if they initially lost money on them) the ELR would ultimately have been successful, and would have given Cadillac a lead in the near-luxury EV market. But Cadillac's choices made it so the ELR couldn't compete on price (like the Volt did), and couldn't compete on performance (especially against the Tesla), so it fell through the cracks, and was only compared to the Volt (but at twice the price) by the unimpressed media, and ultimately it failed horribly in the marketplace.

Even if the Lyriq was being sold today (at a guessed $65K-$80K price point) it would really struggle in the current, tiny, near-luxury BEV market. But by coming out in 2 year's time Cadillac probably doom the Lyriq to share the ELR's sorrowful fate. In 2022, there will likely be many superior BEV SUVs to choose from from, built by the luxury-leading, top European automakers, and maybe even a few from Asia. But their biggest rival will be Tesla. This year, Tesla will probably start offering their Palladium/Plaid drive train in the redesigned Model X, providing a new high point in EV range, enhanced ride and comfort, unmatched Autopilot capability, combined with supercar-beating performance. And the more affordable Tesla Model Y, which already exceeds the future Lyriq's price/performance, will be further enhanced over the next Two years.

I am happy that Cadillac will be building such a nice looking, cool, all-electric crossover. And I am happy that GM is moving forward with their Ultium batteries and BEV3 chassis. But I cannot see how the Cadillac Lyriq will be competitive and sell well in 2022, even if they priced it smartly, exceeded all of their design goals, marketed it well, and wisely introduced the AWD, performance model first.

Do you think that Cadillac’s upcoming Lyric will be competitive and sell well in 2022?