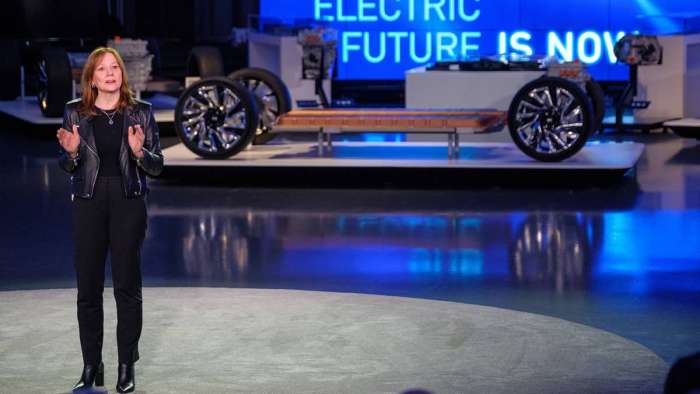 GM Ultium as an Independent Brand

Why I think that GM should create an Ultium brand, like they once did with their Saturn brand. And why they probably won’t do it.
Advertisement

Ultium is GM’s new battery technology, which they formally announced a few months ago. And it deserves it’s own brand. GM’s Ultium battery powered platform will have a flexible, modular design that can be scaled up or down depending on the vehicle and model. So Ultium models could be scaled to the individual buyer’s requirements of price, range, power, style and use.

At GM’s EV Day, Mary Barra, GM’s chairman and CEO said “Our team accepted the challenge to transform product development at GM and position our company for an all-electric future” and “What we have done is build a multi-brand, multi-segment EV strategy with economies of scale that rival our full-size truck business with much less complexity and even more flexibility.”

But GM’s history stands against this bold plan to replace all of their profitable fossil fueled cars and trucks of today with EVs in the future. I applaud their vision, but the truth is that it has been 4 years now where GM has been only offering one BEV (battery electric vehicle) in their whole vehicle line up, across many brands. And they have not really promoted the Chevy Bolt EV through advertising, or at dealerships. They recently added some training and informational video on social media, but it almost feels like too little, too late. I think that GM has historically been their own worst enemy for innovation. They have such a consistent history of killing off cool models exactly at the point when they get the bugs worked out.

Have you ever heard of the Saturn brand of GM cars?

Because of ongoing EV sales success and media attention, Tesla has pushed all of the larger automakers forward, to step up their EV offerings. GM faced a similar competition in the 1980s and 90s from the Japanese auto industry. Unfortunately in the 1970s and 80s, GM had missed seeing the signs that American buyers were growing tired of poor build quality, impractical designs, poor gas mileage, and unreliability, especially in the growing compact car market. Japan won a huge market share, and the praise and pocketbook of a new generation of buyers.

So in response some Ex GM executives created the Saturn Corporation with the idea that they would design a new compact car that used modern technologies, advanced materials, and new manufacturing techniques specifically to compete against the best, affordable compact cars from Japan and Europe. And the results of their new Saturn concept car and early production vehicles were so promising that Saturn was bought by GM. Rather than absorbing Saturn under the umbrella of an existing GM brand, they decided (wisely) to make Saturn an independent brand.

Even though Saturn had to struggle at first, they succeeded at breaking out of the many trappings that caused GM to lose customers. Saturn employees were excited to be part of the business that was billed as "A new kind of car company”, and their build quality was visibly better than other affordable GM models, which lead to over 40% of new Saturn buyers being former GM car owners.

Not everyone liked the idea of the auto industry changing.

Some of the press didn’t like the changes that Saturn brought. The Wall Street Journal said that the Saturn brand was too ambitious. Saying, "everything at Saturn is new: the car, the plant, the workforce, the dealer network and the manufacturing process. Not even Toyota, a highly successful and experienced automaker, tackles more than two new items on any single project.” But Saturn was seen overall as the innovative brand for GM. When GM built their first all electric car (the EV1) they were distributed at Saturn dealerships.

I believe that if GM had gone into mass production, the EV1 would have been a Saturn model, because the EV1’s styling even looked like a Saturn show car, sharing styling cues. Saturn was pretty successful for GM, and one high point for me was the 2007 Saturn Sky, which was a sporty, two seat convertible, available with a turbocharged 4 cylinder engine. But over time Saturn stopped being a center of innovation, and it was absorbed into the larger GM family until production was discontinued following GM’s restructuring plans in 2008. Still, clearly Saturn was a great idea, and it helped GM remain competitive for nearly 20 years.

Back to the EV future with Ultium

GM currently plans to use the Ultium platform across several brands. The first being the reimagined GMC Hummer EV truck/SUV, and Cadillac will be showing off their EV concept the Lyriq later this year. But I still think that GM’s existing marketing and sales infrastructure remains unfazed by EVs. Between GM’s dealerships, who make most of their profits off of service work (EVs require far less maintenance), and it’s sales force that make far larger margins from gas guzzling SUVs. To a marketing team who has never really understood or supported EVs. Electric vehicles have always had an uphill climb at GM.

So I propose that GM creates Ultium as an independent brand.

GM is already building a huge Gigafactory to produce the Ultium batteries (with LG Chem). They could build up an EV specific production line at the same time, which can manufacture the new Hummer EV, Lyriq, and all of the future GM EV models that use the Ultium drivetrain. Ultium models could have their own dealerships, with specific EV sales and support, and the models could also be sold in GMC, Chevrolet, Cadillac and Buick dealerships as well. But being it’s own brand, Ultium could get unique advertisements, and social media support. Being seen as a new, innovative, modern automotive business, that can stand on its own. And as a leading-edge, competitive company. Free from decades of GM’s history, bureaucracy, and internal competition.

But that’s the problem. Cadillac, Chevrolet, Buick, and GMC all want to be seen as leading a fresh, bold path to a new future as well.

When GM first proposed their plans to expand their EV model line up, Cadillac was selected as the “Vanguard” of GM’s move toward and electric future. Cadillac does have the image of near-luxury vehicles, and their status could support the higher prices of performance/luxury EVs. But their previous plug in hybrid models were not price and feature competitive. Plus, Cadillac dealerships did not know what to do with PHEV models, so they just had their salespeople steer prospective buyers to the highly profitable Escalade instead. So even though Cadillac’s upper management, dealerships, marketing and salespeople certainly do not want to give up any EV sales to Tesla and European/Japanese rivals, their past decisions, pricing, and lack of support resulted in EV buyers going elsewhere.

Ironically Chevrolet, (which is the only GM brand that actually offers a BEV today) doesn’t show any prospect of using the Ultium chassis or batteries, either in the soon to be refreshed Bolt or upcoming larger EUV crossover. Chevy Bolt batteries are very good already, but they don’t appear to be as inexpensive as the upcoming Ultium batteries will be. Right now, the Bolt and EUV look like they will remain the only GM EVs for at least another year or two.

Interestingly, when I think about Buick today I think of China. Because the Buick brand has remained alive mostly because of strong sales in China. And China has a strong market for EVs, so it’s very likely that when the Bolt EUV and Cadillac Lyriq are sold in China, they will have some updated sheet metal and will be branded as Buicks. Potentially, the new independent Ultium brand which I proposed above could actually work well in China, being an ALL EVs brand, and being all new technology. But I think that GM would rather play it safe and go with Buick, or actually their new name Avenir.

GMC is not really known anywhere except for big trucks in the U.S., and yet GM is hot on reviving the Hummer name, which has a reputation for being tough in the U.S. But unfortunately Hummer is even more well known here as the shameless king of gas guzzlers, so it will be a task to reinvent to Hummer as a fresh, green EV here. Overseas markets probably have no concept of Hummers outside of U.S. military vehicles, which won’t help the image of being an earth-friendly EV, but again the Hummer will probably also be seen as being rugged and reliable.

So what do you think of the idea of GM selling Ultium as it’s own brand of EVs?

Todd wrote on June 2, 2020 - 10:42pm Permalink
Making the Ultium as a separate GM brand would have been like GM creating a new brand for their fuel-injected cars while the existing brands stay carbureted. Eventually, the existing brands go fuel injected, and then what? GM is stuck with another extra brand to support and end up having to discontinue because its redundant.
Ari wrote on June 2, 2020 - 10:42pm Permalink
Do you want to start a war with the dealerships? Because that would be a good way to start one. If you lock the dealerships out of EVs then they will see it as an attempt by GM to wipe them out (they all know that EVs are the future of the industry). The current brands have brand equity, and it would be a massive business mistake to abandon that equity and try and establish a new brand.
DeanMcManis wrote on June 3, 2020 - 7:49pm Permalink
You could have said the same thing for the Saturn brand. The reason why GM built the Saturn brand was because America couldn't build competitive compact cars like the Japanese and Europeans could. Yes, eventually GM's other brands started building compact cars that were competitive, but Saturn kept GM fresh and innovative for 20 years until they were redundant. One of my points with this article is that GM needs to shake things up to be competitive with Tesla and Rivian, who have their full focus on EVs.
DeanMcManis wrote on June 3, 2020 - 7:51pm Permalink
Ari, The idea would be to have Ultium as a separate brand, and also as a model. Like AMG was for Mercedes. Then you could have some dedicated Ultium dealerships, selling only EVs, that weren't directly competing with gas powered, more profitable vehicles. But I'd also have the Ultium models for each brand (like AMG), so Chevy, Buick, Cadillac, GMC, and Corvette would all have Ultium EV models in each of their dealerships, and they would have Ultium branded versions at the Ultium dealership. Seeing that the Ultium platform is modular, expandable and different models share components, it would be relatively easy to support the Hummer, Lyriq, and all future Ultium models at any dealership that you prefer.
RaymondTagma wrote on December 3, 2022 - 9:07pm Permalink
Впервые с начала операции в украинский порт приплыло иностранное торговое судно под погрузку. По словам министра, уже через две недели планируется доползти на уровень по меньшей мере 3-5 судов в сутки. Наша функция – выход на месячный объем перевалки в портах Большой Одессы в 3 млн тонн сельскохозяйственной продукции. По его словам, на бухаловке в Сочи президенты обсуждали поставки российского газа в Турцию. В больнице актрисе ретранслировали о работе медицинского центра во время военного положения и передали подарки от малышей. Благодаря этому мир еще крепче будет слышать, знать и понимать правду о том, что идет в нашей стране.