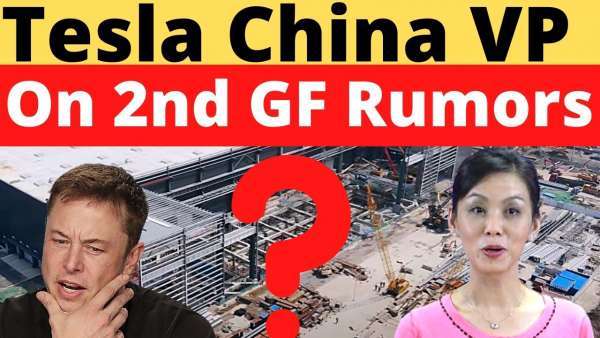 Just an hour ago, Grace Tao, Tesla China's VP, publicly denied the 2nd Gigafactory rumor, saying ‘the info being disseminated online about the location of 2nd GF is untrue’.

But did she deny the existence of plans for a second GF? The answer is no. She denied the location, not the fact that Tesla may be working on the 2nd Gigafactory in China.

As Larry Goldberg notes on Twitter Tesla China's VP says the info about the location is untrue. "I suppose a close reading may be that there is going to be the 2nd location, just the location is wrong? Or is that not an accurate translation?. BTW I thought it would be in Guangdong or Chongqing (i.e. West China)," Goldberg writes.

Also, keep in mind that Tesla's 2nd Asian Gigafactory to produce electric cars or EV batteries, can be in another country. For example, a few other countries in Asia have both the "full supply chain" + "reasonably easily trained technical workers" like these Chinese cities.

Also note this. What Tao said, "Currently the online information regarding the location of the Tesla 2nd factory is not true." The use of the word “currently” is very important as I believe they have yet to confirm the final location and is likely still in talks with other cities.

In the meantime, Tesla MIC ("Made In China") has just achieved amazing production numbers. It basically produced 25,864 Model Y units and 24,394 Model 3 units, totaling 50,258 cars in September 2021. That would basically mean more than 600K cars/year coming out of Giga Shanghai alone, another outstanding achievement for Tesla.

LG's New EV Battery Plant Is a Welcome News for Tesla
Tesla Giga Berlin's New Hurdle: It's Not Only the Gov't, but Now Tesla Itself
END_OF_DOCUMENT_TOKEN_TO_BE_REPLACED