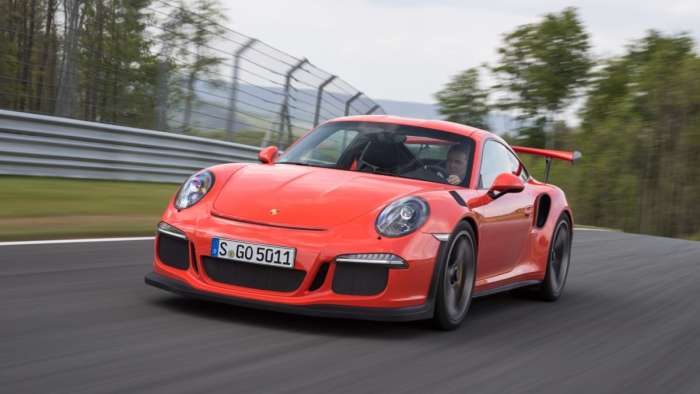 The Porsche 911: A Supercar vs A Sports Car

As performance cars get faster and faster, they jump up the food chain. Now, in 2021, the Porsche 911 is better than ever - but what exactly is it?
Advertisement

In just the past 5 years or so, we’ve seen several cars go from slow to fast, boring to exciting, and bad to good. For example - the Mustang went from “pony car” to “holy crap this is an amazing sports car” with the GT350, the Corvette finally went full Italy on us with the new mid-engined C8, and the Honda Civic Type R went from a cool little sports car to one of the best driving machines on the planet. We would include the Alfa Romeo Giulia but it took them 30 years to come out with a new one so that doesn’t count. But let’s talk Porsche.

Porsche finds itself kind of in the middle, in two ways. Firstly, the 911 hasn’t had any dramatic change in “goodness” like the other ones we mentioned, and secondly, the 911 itself is in between the sports car segment and supercar segment. We’ll explain both of those eventually but is it stupid to be skeptical about the 911s social hierarchy? The answer is tough to say definitively, though we think it’s valuable to ponder. 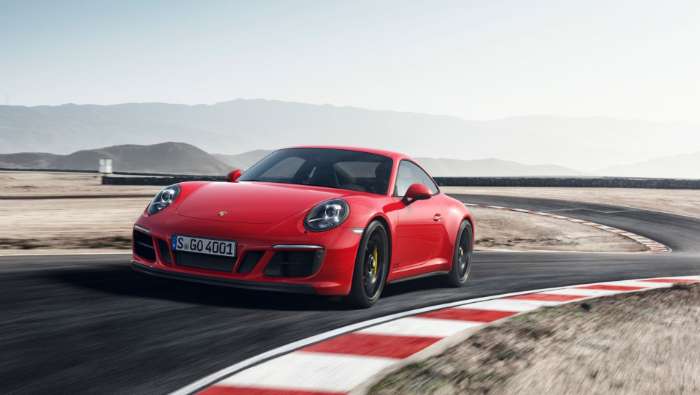 Why The 911 Can Be Considered A Sports Car

Defining a sports car isn’t really that easy when it comes to putting words on paper. You could say a sports car is, fun to drive, handles well, and is quicker than the average automobile. But the problem with that lies in a couple of ways. An old ‘90s honda civic hatch-back can be fun to drive, handle well, and be faster than average, but at heart that civic is just an economy car. On the other hand, the Mazda Miata is one of the greatest sports cars ever but it’s not faster than the average car.

The reason we say this is because the 911 checks all those sports car criteria boxes, making it a sports car by default no matter if you think its a supercar as well. The 911 has been a true sports car for decades and it would be hard to find someone who said otherwise. The argument that puts the 911 in the sports car column is very well-backed. The core of the 911 community will always refer to it as a sports car and those two words themselves are almost synonymous with the 911.

In 2021 though, the 911 lineup is very different than it was 30 or 40 years ago. You have on one side the Carreras and GTSs that you can get with a manual and minimal options. Those would be the true sports cars as they provide a more “do it yourself” type of experience. But on the other side, you have all of Porsche’s special GT cars. Those are a different story. 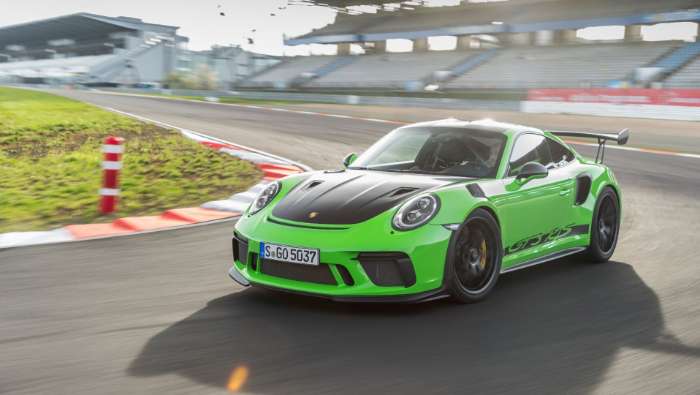 Why The 911 Can Be Considered A Supercar

In 1975, the newly introduced Ferrari 308 GTB could do 0-60 in 6.2 seconds. In the same year, the newly launched Porsche 930 Turbo could it 5.2 seconds. When you think of the word “supercar” you probably think Ferrari. Maybe it should be Porsche. The point here is that even when supercars were first spawning from Italy, the little Porsche was quicker in a straight line and could probably out-handle the Ferrari on a back road. And just like in 1975, the current highest performance 911s are right up to par with all the textbook supercars like the Lamborghini Huracan and Aventador and the Ferrari 488 Pista and F8.

If you think the 911 is a supercar, then lap records are your best friend in a debate. Take a look at the Nurburgring, Laguna Seca, and other track’s lap record lists for production cars. There’s a good chance that you’ll see “Porsche” along with either “GT3” or “GT2” up and down the page. Oh, and you’ll probably see “Randy Pobst” in there too, he’s MotorTrend’s test driver and a god amongst men.

Back to the 911. Calling an automobile that that supercar levels of performance a “sports car” seems a little bit juxtaposed. You probably wouldn’t call a McLaren a sports car because it’s usually bright orange, mid-engined, and violently quick, but a McLaren 570S won MotorTrend’s Best Driver’s Car award a couple of years back. Remember what we said about a sports car being really fun to drive? The McLaren checks that box but is still a supercar in most people’s eyes. So why not the big 911s? The Turbo, Turbo S, GT3, GT3 RS, and GT2 RS are some of the most effective track weapons on the market but they still are considered sports cars by many. We’ll let you hash out the argument. Which is it?

Mark wrote on April 17, 2021 - 6:38am Permalink
Everyone is entitled to their own opinion, but Max Larsen trying to pass a (very capable) sports car off as a supercar exposes his lack of driving experience and focus purely fixated on performance figures, like most teenagers. The 911 will never be a "supercar". It is a sports car. Fact. The only "supercar" which Porsche has made recently is the 918. The 911 can never be considered a supercar because they are too common and because a rear engined (flawed) design will never out-handle a similarly powered mid-engined design "out-handle a Ferrari on a back road". Basic physics. The 911 is NOT a supercar. Just a very good sportscar. He probably owns a 911, which is why his view of the ancient design is skewed.
Max Larsen wrote on April 17, 2021 - 8:50am Permalink
Thanks for your comment! However, I do not have an obsession with power figures, lap times, and 0-60 numbers as you pointed out, correctly, is a common misguided point of view for younger people. What I do have is knowledge of the change that the 911 has undergone in the last few decades and even just the last few years. The most recent GT2 RS is quicker around the nordschleiffe than the 918 - which you called a supercar. All I was pointing out is that the top trim modern 911s have been inching away from experience and towards lap times. I do understand how engaging any 911 is to drive and how the mid-engine layout is always preferred for performance, but saying that a 911 will NEVER reach the supercar level is misguided in my view.
Anap40 wrote on November 30, 2021 - 1:56pm Permalink
Want to revise your comment now that we have seen the cayman gt4 rs? Slower around nurburgring than the 911 gt3, exact same engine.
StoneyLowe wrote on September 24, 2022 - 6:04am Permalink
Saying the 911 isnt a supercar because its too common is stupid, when I lived in LA i saw some model of Ferrari and multiple Huracans every day, and an Aventador or some other VERY high end supercar at least a couple times a week, does that make them not a supercar? Or do they just become non-supercars when you enter LA county? As far as handling, the GT2 RS MR ran a 6:38 around the ring, faster than an Aventador LP770 and a Huracan LP640, along with a whole pile of Ferraris, Lamborghinis and Mclarens. In fact in went faster than the damn 918.
mark wrote on September 25, 2022 - 8:50am Permalink
Thank you for your comment calling me "stupid". I will not lower myself to your level and start my comment with an insult. Having undertaken clinical psychological testing recently, as required for my profession, and being proven to be in the top 3% of intelligence on the planet negates your assumption. It appears that the term "Supercar" is open to personal interpretation. your CAPITALIZATION of the word "very" is laughable. My father was production director on the McLaren F1, I saw them most days when I was younger and visited him at work, the roadcars, GTRs, LMS, shorttails, longtails, the lot. Does the fact that I saw them so often mean that they are not "Supercars"? My interpretation of the word "Supercar" would be something like this: "A high performance vehicle, of striking design, not based on an already existing platform". The 911 does not meet 2 of my criteria, so will never be regarded as a "Supercar" by me, and most of the other car enthusiasts on the planet, it seems, period. There will always be exceptions. I have owned 7 Porsches (5 of them 911 turbos), 2 Ferraris and 2 Lamborghinis. Putting a more powerful engine in an already existing platform and introducing more aerodynamic devices does not "magically" move said vehicle into the "Supercar" club, no matter the increase in performance. People are different and at the end of the day, neither your, or my thoughts on the matter are of importance. If something puts a smile on your face, you can call it whatever you like.
bill smith wrote on April 25, 2021 - 12:10am Permalink
Porsche delivered 34,328 911's in 2020. I think that kind of disqualifies it as a supercar alone.
David Emberson wrote on May 17, 2021 - 1:39am Permalink
Not all 911s are created equal, which I think is the point. Not all cars named Ferrari are worthy of the name supercar, either.
Will wrote on May 22, 2021 - 3:44am Permalink
Edit: Title changed from "Why the 911 should be considered a Supercar" to "The Porsche 911: A Supercar vs A Sports Car". Well done, point taken.