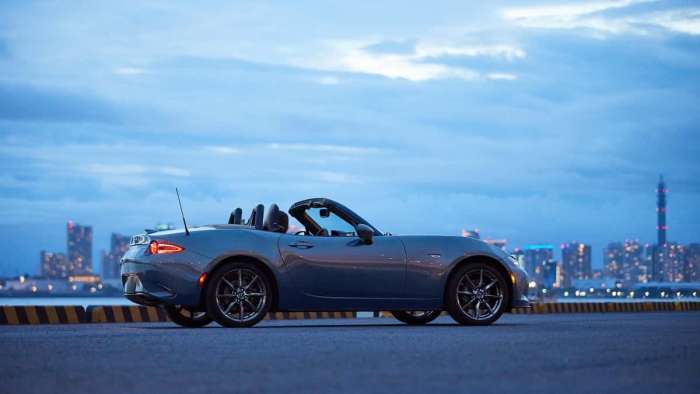 We compare the prices of a Mazda Miata Sport and adjust for the changing value of the dollar. The results show a decline in the cost of America’s most affordable sports car.
Advertisement

In 2006, the list price of a new Mazda Miata Sport was $23,495 including the destination charge. For 2021, the list price of a Mazda Miata Sport is now $29,125. At first glance, it seems that the cost of America’s most affordable sports car has increased. That is until you factor in the changing value of the dollar. Do so, and the 2006 Miata would have a price in today's dollar of $30,278. Rather than cost a consumer more, the Miata has been declining in cost over the past two decades.

Although the Miata costs its owner less today, its capabilities and its content have risen dramatically. 2006 was the first model year for the NC, or third generation of the Mazda Miata. Today’s ND, or fourth generation, has an improved six-speed manual gearbox, an increase in horsepower, a quicker 0-60 MPH time, and dramatically superior infotainment and audio system. Best of all, the door-mounted cupholder doesn’t rub your knee raw. Mazda is continuously offering owners more car for less money.

America’s passion for annual “cost of living increases” in worker pay and taxpayer-funded benefits results in the dollar declining in value. The tail wags the dog if you will. We all wish to “earn more” as each year passes for doing the same work, or for being entitled to the same benefits. So with each passing year, a raise is granted. The value of the dollar quickly adjusts via inflation. The cost of goods rises and the imaginary pay increase is negated. It’s the game we’ve chosen to play in our make-believe economy.

What is not imaginary is that the Miata continues to be the most affordable convertible and most affordable sports car in America. Many owners and fans consider the Miata to be the most satisfying back-roads car one can purchase for any amount of money. That the Miata is still available for under $30K is nothing less than a miracle given how rapidly the dollar’s value has been declining.

Shoppers have taken note of the amazing value of the Miata. During our recent period of record unemployment, sales of the Mazda Miata jumped. The Miata's sales has been outpacing last year's sales by double-digit percentages. If you own a Mazda Miata from a past generation, what would it's cost be in today's dollars? You can find out using this handy inflation adjuster.