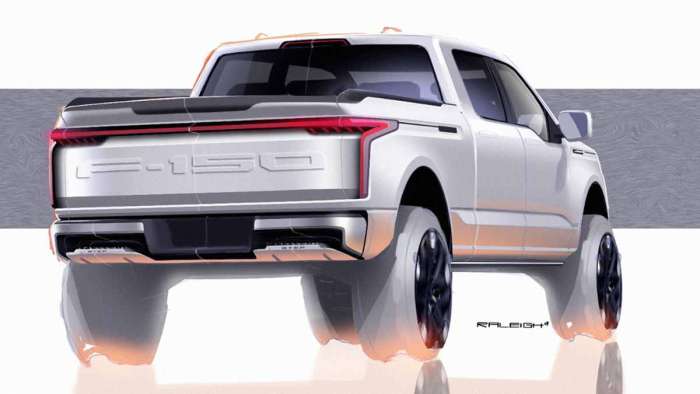 What Would A Ford And Tesla Collaboration Look Like?

This week I wrote a “comparison” of the Ford F-150 Lightning and the Tesla Cybertruck. Two trucks that don't exist yet. It got a lot of comments and reactions from the Tesla loyalists and the Blue Oval fans. I did not think what I wrote was that controversial.

However, Tesla loyalists are incredibly passionate and often chime in to vehemently defend Elon and the Tesla brand. Truth be told, I love Tesla vehicles and I would love to interview and hang out with Elon Musk. And Teslas are a blast to drive. I would love to drive a Cybertruck, just for the experience.

The gist of my comparison story between the Lighting and the Cybertruck was this: both Ford and Tesla are really good at what they do. But what Ford does well, Tesla does not and what Tesla does well, Ford is just now beginning to do. So for me, it would have made sense for these two innovative companies to have combined their resources to make one amazing electric truck.

Related story: Comparing the specs of the Lightning and Cybertruck 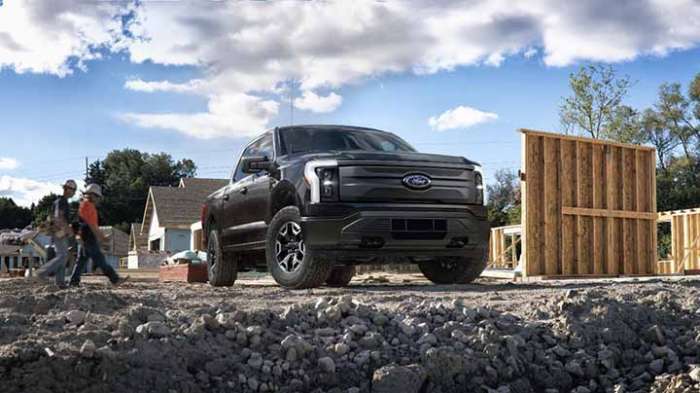 Areas Where Tesla Could Improve The Ford F-150 Lightning
Directly after the world reveal of the Ford F-150, which was less of a circus and had less showmanship that Elon’s reveal of the Cybertruck back in 2019, I wrote a piece showcasing five things I liked about the Lighting and three things I didn’t.

Looking that over, the biggest letdown for me was that the F-150 Lightning’s range was disappointing when compared to the maximum range of the Cybertruck. All along I wanted and hoped for 500 miles of range. This would allow for towing, which will likely decrease range by 50 percent. So having 500 miles of range, meant 250 miles in range while towing (in theory).

The Lightning has a maximum range of 300 miles and that drops to 150 miles or less when you start towing. Meanwhile, the tri-motor Cybertruck claims it can reach that 500-mile range.

So imagine if Tesla and Ford joined forces and put Tesla’s outstanding battery technology into the Lightning? Imagine if Ford got to that 500-mile range level with ease and could then showcase the Lightning’s impressive torque and towing ability. That would greatly improve one of the biggest knocks against the Lightning.

To be honest, this is the area that Ford needs to improve upon and a collab with Tesla could help. That won’t happen, of course.

The other area is the charging network. Tesla has been making EVs for years and has the charging network infrastructure in place to dominate that. Ford is still playing catchup in that regard and some of the criticisms have been the slow charge times at their networks, especially when you get to the 75% charge range. Ford has done a great job of improving their at-home charging and I expect big advancements in that regard down the road.

Likewise, the nation’s entire EV charging network will have to quickly improve and Tesla won’t be able to dominate this area for long. All manufacturers will have to play in the sandbox together so to speak. But imagine if Ford’s Lightning could also jump onto Tesla’s supercharger network. Wow! 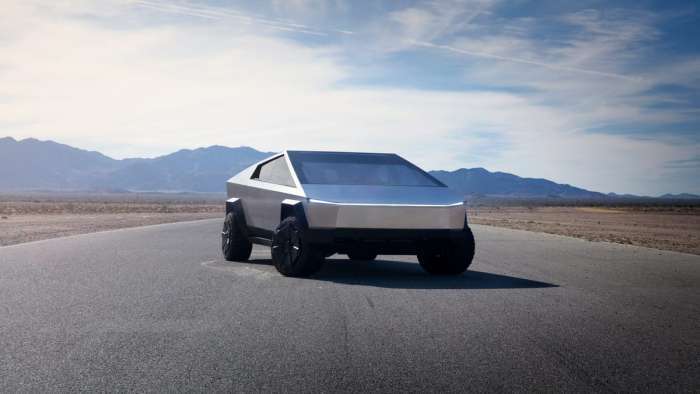 Areas Where Ford Could Make the Cybertruck Better
Tesla has always been an outlier when it comes to the automotive world. They do their own thing. Elon Musk is a rebel and a little quirky. So it shouldn’t have surprised anyone when he revealed the Cybertruck.
But if you’re like me you were shocked and thought Musk might be playing a prank when he revealed that goofy looking Cybertruck. That can’t really be it, I thought. It looks like something from Mad Max.

But the Cybertruck with its angular steel panels is the truck that everyone mocks. Perhaps that is an advantage for Tesla – to be different. But if Ford and Tesla were to collaborate imagine how the Ford Design Center and their experienced designers and clay modelers could have made the Cybertruck look better.

Related story: The F-150 Lightning does not represent a missed opportunity for Tesla.

It could still break “the rules” and be different, but not look like something drawn by a five-year-old in kindergarten. Sorry, but the Cybertruck just looks ridiculous and I can’t help but assume that Ford’s designers would have made it look much better, while still allowing it to have its own personality.

As such, the Cybertruck won't be a draw amongst the commercial consumer, which is missing a big market of the Lightning.

The Lightning is an F-150 so it had to stay in a similar look but the Cybertruck would not have to stay in that mold. I wonder what it could have looked like with designers from within the auto industry versus.

The other area, as I pointed out in my “controversial” article that Ford excels at that Tesla does not is in manufacturing. The Tesla fans can try to jump to Elon’s defense, but all of his business success has not come from manufacturing. In fact, most everything comes from the tech world.

When Elon started cranking out his Teslas he admitted he had no idea how to make cars and admitted numerous mistakes. Ford has been a leader and innovator in the auto manufacturing for more than a century.

They know how to improve the manufacturing process. They have the workforce and the facilities. Tesla is playing catch up to Ford in this regard.

So manufacturing seems like a no brainer area that Ford could help Tesla in this imaginary collaboration. 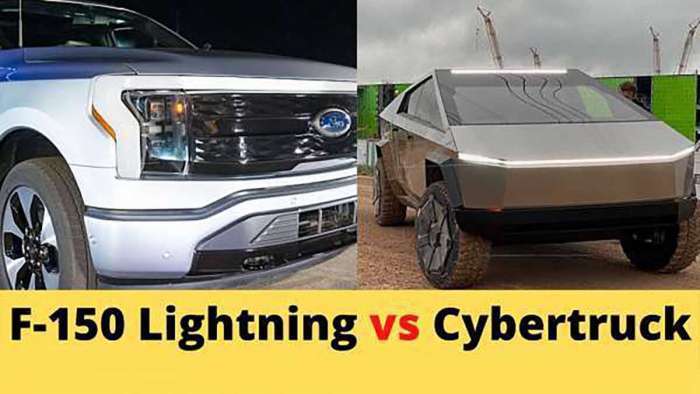 Conclusion
Obviously a Ford and Tesla collaboration won’t happen (although in this industry never say never). The one thing that is super annoying is that Tesla fans seem to want to tear down and destroy all of the other auto manufacturers. That is weak and unnecessary. It’s also disrespectful.

Companies like Ford and General Motors paved the way in manufacturing and automotive technology for a multitude of decades. Tesla is the newcomer. That’s what draws fans to them, I get that.

But you can be drawn to Tesla without being disrespectful to the history of the automobile of which Ford plays a monumental role. Tesla would not exist were it not for Ford. But Ford existed long before Tesla. Think about that.

Leave me your comments as the discussions have been mostly good (keep it civil).

Clint wrote on June 26, 2021 - 11:00am Permalink
Five years from now will prove that for would need this hypothetical “merger” waaaaaayyyyyyyy more than Tesla.
Byron Blue wrote on June 27, 2021 - 2:55pm Permalink
Tesla is the newcomer with new ways and methods. Ford, is old and blah.
Jimmy Dinsmore wrote on June 28, 2021 - 7:50am Permalink
Which is why if they collaborated it would be interesting, to me.
Clint wrote on June 28, 2021 - 2:36pm Permalink
Jimmy. I agree that the merger would be an interesting thought. I currently own two Tesla’s and love them. My previous two vehicles were both fords. But I think that Ford and GM will have a tough time adapting in the coming years to the electric revolution. Tesla’s vision, energy, and IQ are going to keep them three or four steps ahead of the rest. In due time their fit and finish will improve as well. I also love that Tesla is a very, very American car company. In fact the Model 3 was just named the “Most American” car for 2021!!!
Jimmy Dinsmore wrote on June 29, 2021 - 8:43am Permalink
No question Tesla has made some huge progress in manufacturing. And yes I saw the Most American story. Tesla will push the Big Three, and that will be a good thing for the end product and the consumer.
Timothy Boyer wrote on June 30, 2021 - 9:02am Permalink
Good article, I am not a sociologist, but I think that a fundamental difference between Ford and Tesla is that deep down people want to have a hero and/or believe that they are part of something much bigger than themselves, which is what Tesla is really selling; Ford, on the other hand is traditional and does not have the same appeal to the younger generations. I agree with your annoyance on some---but not all---Tesla fans on what appears to be a disrespect for automotive history and the revolutionary role Ford played in it. And since we are in the midst of a new revolution in automotive history, I can't help but notice that one of the parallels we are seeing is the history-repeating act of throwing out the old and embracing the new similar to the Cultural Revolution in China. In other words, if you are not a believer in the new, then you are counter-revolutionary and to be pitied if not actively despised. My best prediction: We will eventually become a nearly all-EV world, but not as soon as many would have us believe. ICE vehicles will become collectors items (much worse and much more expensive than it is today) and will generate a huge following of home-garage mechanics who want to get their hands dirty, as well engender creative businesses that will see an opportunity in offering rebuilt EV-modified ICE cars and/or building EVs that look like traditional vehicles of particular styles. My hope is that EV makers will find that rather than offer a few redundant boring body styles, that in fact they will find a way to use the same frames and electric power trains, but turn them into life sized Hot Wheels so that vehicle owners can have something new and varied to choose from. I mean, come on---what kid or adult does not love Hot Wheels?!
Jimmy Dinsmore wrote on June 30, 2021 - 9:04am Permalink
What a good, insightful comment. Thank you. It's an interesting take for sure. I do think ICE vehicles will go away, but I don't think it will happen as quickly as people predict.