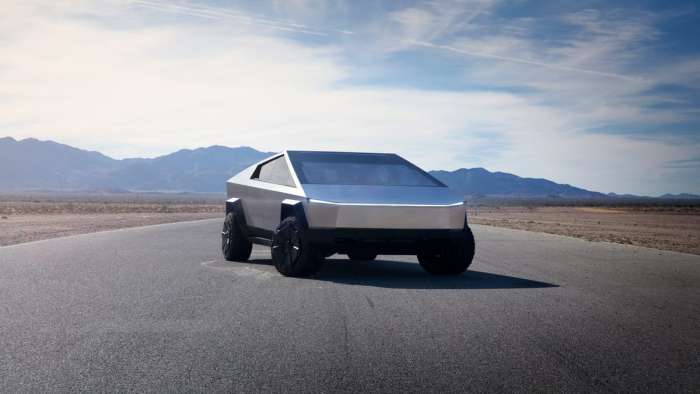 There have been some who think that the new Ford F-150 Lightning shows a missed opportunity for Tesla. This train of thought doesn’t take into account why vehicles like the Cybertruck are produced to begin with.
Advertisement

The Ford F150 Lightning has been in the news a lot lately. An article from earlier this week compared the specs of the Ford-150 Lightning to the specs of the Tesla Cybertruck. Both trucks have impressive specs and have a starting price that's just under $40,000. However, some people have said on twitter that they believe that the F-150 Lightning represents a missed opportunity for Tesla.

The argument that Tesla missed an opportunity

There is the opinion that is circulating that Tesla should have made a more "normal" looking truck, and not a bullet proof steel rover that belongs on Mars. They say there’s a market for a more normal looking truck. One of the only concerns about the Cybertruck as of late has been the rising prices of steel.

Why Tesla didn’t miss an opportunity

Tesla didn’t miss an opportunity by deciding to build a truck that looks different from the rest. Not every car brand should be building cars that look the same as the other brands. This is part of the problem with modern automobiles. The Cybertruck will sell a lot of units and may even attract a demographic of buyers that is somewhat similar to the buyers who will purchase an F-150 Lightning. This does remain to seen though. Many buyers see the Cybertruck as more than a pickup. They see it as a vehicle for everything. That sentiment can be backed up by the fact the Cybertruck can thrive at the campsite, or roll effortlessly down the tight streets of New York City.

Tesla still has an opportunity

In the first tweet, the author of the tweet proves their own point. Tesla can still produce a “normal” pickup alongside the Cybertruck. At the rate Tesla is growing, they will have many more Models that come out within the next few years. If Tesla eventually had two electric pickups to choose from, it would only help the brand. If gas prices keep increasing, then demand for electric pickups could increase. Many buyers who hardly ever haul anything have flocked to the pickup market in recent years due to the fact they sit higher up and are more practical. This is not a trend that will be easily reversed.

Tesla is smart to wait

If Tesla were to come out with an electric pickup now, it may be even more so in competition with the Ford pickup. The Cybertruck is somewhat similar to the F-150 Lightning on paper even though they both look very different.

Why Elon Musk might be hesitant to build a normal pickup

Musk might be hesitant to build another pickup for a couple reasons. One reason is that it might not be good in a financial or practical sense for the Tesla brand. The second reason is that Tesla might not want to build a “normal pickup”. For example, the Model X doesn’t look that much like a typical SUV or crossover, but the Cybertruck is much more unusual.

What Tesla could do

Tesla could decide to build a second pickup that is more geared toward towing and hauling, but that might not make sense for the reasons outlined above. The Cybertruck can tow between 7,500lbs and 14,000lbs. That is a lot it of weight, and the Cybertruck can more than hold its own against almost any pickup. It just happens to look different.

DeanMcManis wrote on May 23, 2021 - 3:51am Permalink
I think that Elon Musk really wanted to make the Cybertruck stand out as looking and being different than any existing pickup truck today. He knew that soon Ford and Chevy would come out with an electric version of their traditional pickup trucks, and that they would probably make them look exactly like their gas/diesel trucks so that they could access the huge pool of traditional pickup truck buyers, not of which have ever owned, or even thought of owning an electric pickup. Tesla wanted their pickup to redefine the segment, and stand apart, but still compete on capability. Elon understands that the Cybertruck is too big for many European and Asian roads, and too big as personal (not commercial) transportation. So he already said that Tesla would most likely produce a smaller pickup for those markets. But my guess is that Tesla will carry over the Cybertruck styling and build techniques and materials, and just build a 2/3rds sized version. Just as the Model Y is a scaled down Model X, and the Model 3 is a scaled down Model S. In fact the smaller Cybertruck may actually be a second Generation Model Y under the sharply folded skin (if/when it does get built).
Rick Nash wrote on May 24, 2021 - 12:19pm Permalink
Let's see how successful the cyber truck is. 'Normal looking trucks' are extremely popular right now in my neighborhood. Ignoring they don't easily fit into the average two-car garage and they spill over onto the public sidewalks of many front driveways, maybe the cybertruck fits better? No one likes a vehicle that takes up two parking stalls should the cybertruck become emblematic of that trait. Better to blend in with all the other trucks.
Al D wrote on May 24, 2021 - 2:21pm Permalink
They'll all have their fans. Yes, the competition will attract a more conventional crowd than the Tesla UFO. That includes the 2022 Tundra in all its forms. Toyota is being very secretive about the Tundra, which is also expected to come in hybrid form. A plug-in Tundra would probably be a hot item, giving electric pickup fans something to think about like range and no need for charging stations..
DC25 wrote on May 25, 2021 - 9:30am Permalink
I think they realized that breaking into the extremely brand loyal modern day truck market was kind of impossible for a brand new electric car company sounded in California. I'm sure the demographics of the people who typically buy pickup trucks don't intersect very much with those who buy Tesla's other vehicles. So I think they realized that breaking into that market was a bit of a lost cause. Even companies like Honda haven't done well making traditional trucks. I think the actual market that they're going after is the outdoor adventure type. Those who enjoy off-roading hunting or camping. More the type of people who would buy a Jeep or Subaru, then those who need a serious work truck. These people are probably more likely to be environmentally conscious as well.