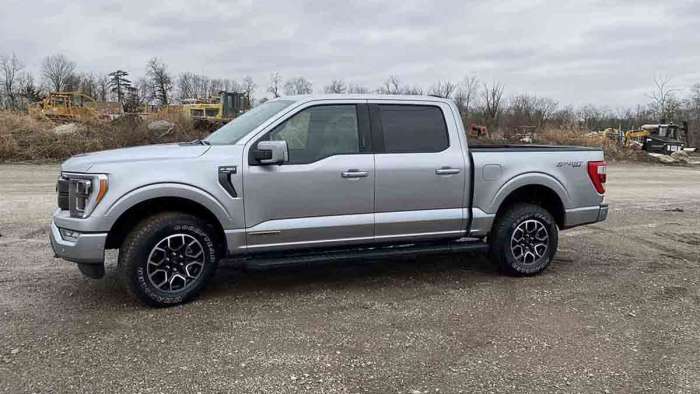 With the redesigned 14th-generation of the best-selling truck in America, Ford brings the F-150 further even more leaving an outdated Toyota Tundra to remain current and relevant. F-150 offers several engine options while Tundra has only a V8. Meanwhile F-150 has dealt with some issues over rust on current generation as Toyota hangs onto its durability reputation.
Advertisement

It’s no secret that Ford has grabbed the limelight lately when it comes to trucks – for both good reasons and bad. Meanwhile, Toyota has remained mostly stagnant with their full-size Tundra. This doesn’t mean that the Tundra is not a quality truck nor a major player in the segment – it is – it just means that Toyota hasn’t had an update on the Tundra in quite a few years.

2014 was the last serious overhaul of the Tundra, making this truck quite long in the tooth, especially since Ford has launched the 14th-generation of the F-150 this year.

The launch of the F-150 has had its ups and downs. The launch last summer was widely successful. And during last month’s power outage in Texas, Ford capitalized on their hybrid F-150’s 7.2-kW Onboard Generator by showcasing how much of a lifesaver it can be. I wrote how it’s that generator, not even the fuel economy, that makes the PowerBoost hybrid F-150 a game changer.

So that’s the good part of Ford’s launch of the 2021 F-150. The bad has just recently reared itself with Ford getting a lot of bad headlines regarding rust on the rear axle housing on many brand-new F-150s. While much has been written about this issue, including my story, my friend Tim Esterdahl of Pickup Trucks + SUV Talk has covered it the best. Check out his coverage here on his YouTube Channel.

So, with all this talk about the F-150, and with the Tundra getting little to no fanfare (good or bad), I wanted to see how the Tundra held up against its top competition, the F-150. I recently drove both 2021 versions, including the new Trail Special Edition trim on the Tundra. This trim, along with a gorgeous Nightshade Special Edition are the only two new things of note for the 2021 model year. 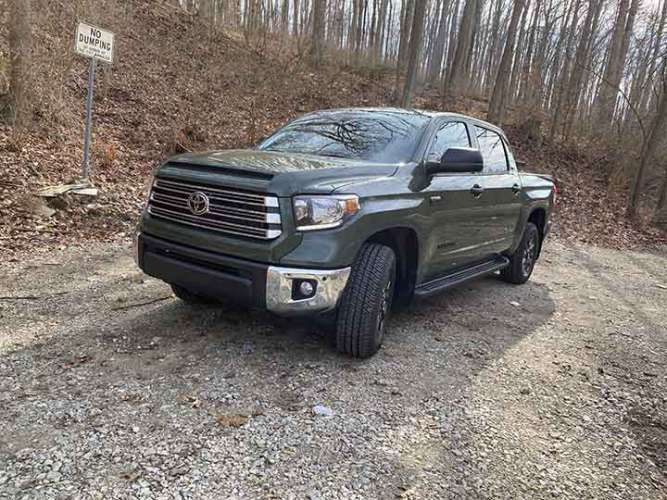 Five Features That Make The 2021 Ford F-150 Better Than the 2021 Toyota Tundra
Technology – Ford’s Sync 4 system is one of the best upgrades against the entire Ford line for this model year. The Sync system has had its share of criticism in the past and throughout its four-generation life, but this latest iteration is outstanding. Combine that with the standard 8-inch touchscreen and it’s already better than the Tundra’s standard 7-inch screen. Although the Tundra I drove did have an upgrade to an 8-inch screen. 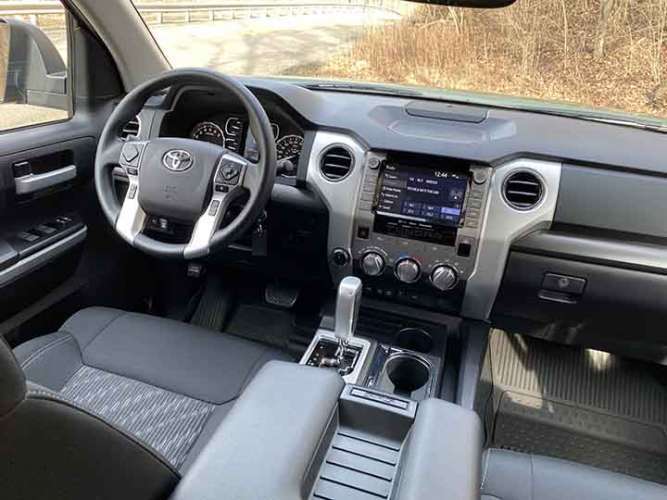 Still, all in all, Toyota’s Entune system, though simple, just feels outdated when compared to the impressive Sync 4. Plus, as we know, through this system, Ford will be offering over-the-air updates, and that’s something Toyota just doesn’t offer. 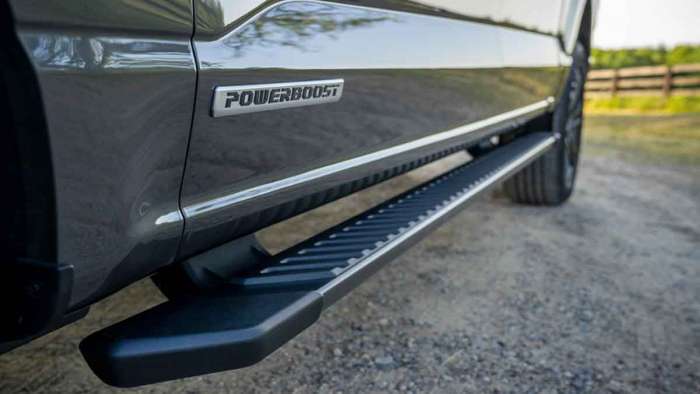 Hybrid powertrain – The PowerBoost Hybrid powertrain is a big deal for Ford and for the truck segment. The Tundra offers only one engine and it’s a big 5.7-liter V8 engine. While that will resonate some purists who love V8 power in a truck, it leaves a lot to be desired in fuel economy. This doesn’t even take into account the perk of the Pro Onboard Generator, which is available in smaller iterations, across even the non-hybrid models. But on the hybrid PowerBoost F-150, the 7.2 kW generator is robust and powerful. 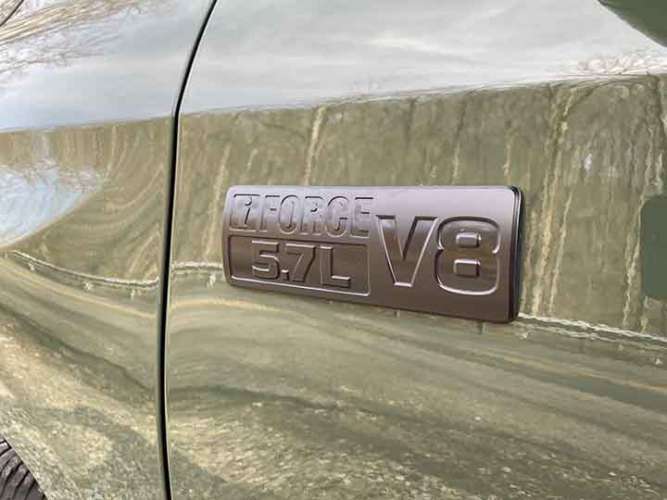 As of now, Toyota has nothing to rival it with the Tundra or any other truck for that matter. 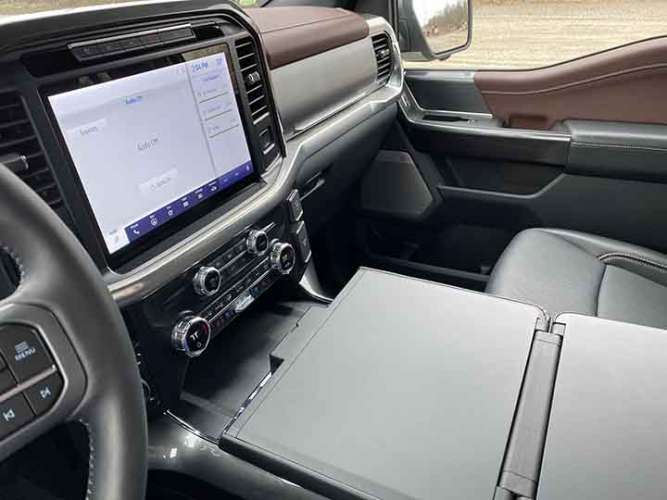 Front seat comfort – The interior cabin of both trucks is unbelievable these days. Today’s modern trucks are luxury behemoths for sure. In the 2021 F-150 there are two front seat features that are unrivaled in the Tundra. The Max Recline Seat, available on the top trims is something I have yet to try out, but looks like the epitome of luxury and a great way to catch a nap in your truck. The Tundra seats are comfortable and certainly enjoyable but the new F-150 has it over the Tundra when it comes to this.

Additionally, while it might be a small thing or even a gimmick, the fold flat work area on the 21 F-150 is a well-thought-out feature. It allows for the center console to flip over as the transmission shifter retracts, to create a flat work surface for laptop work. The Tundra doesn’t have anything to rival this at all. 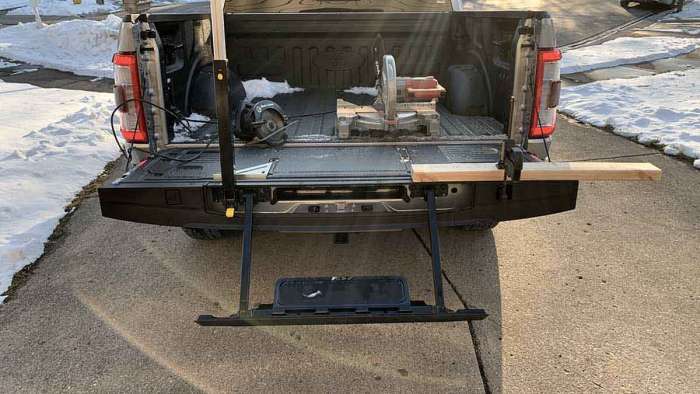 Work-focused tailgate – Much has been improved over the years on truck tailgates. GM has made huge advancements in the segment. Meanwhile, the Tundra has remained mostly unchanged in this regard. The 2021 F-150 has a work-focused tailgate that includes measurements (ruler), a space for a pencil and even cleats to latch down wood for cutting. 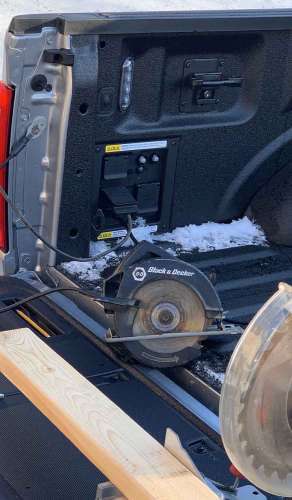 Ford’s engineers clearly thought about how a truck might be used when they designed this feature. Is it a gimmick? Perhaps, but it’s quite a useful gimmick. 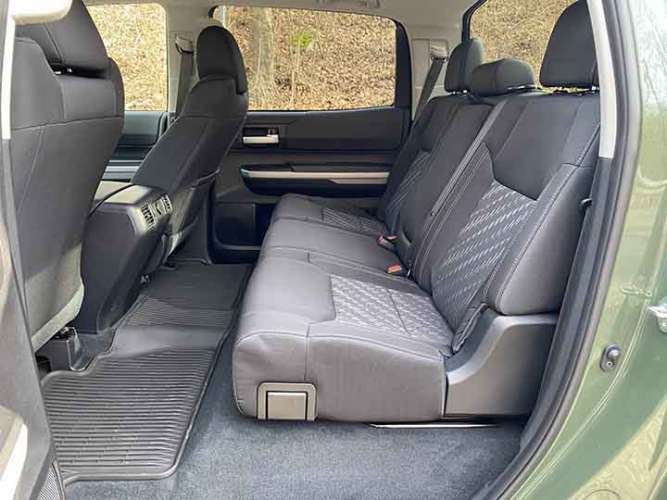 Two Ways The 2021 Toyota Tundra Is Better Than The 2021 Ford F-150
Reliability - As is always the case when reviewing vehicles, everything is objective. However, Toyota has hung its hat for a long time on its reputation of reliability. While the current generation Tundra is now 7 years old, many of the issues have been worked out, while Ford just launched the 14th-generation F-150 and is already facing some quality issues.

When I review vehicles I often get asked about well do I think a vehicle might hold up. I always answer that I don’t have a crystal ball. I will say that Toyota has always fared well on reliability and the Tundra is stout. The F-150 is facing a recall over windshields plus a minor battery drain issue, in addition to the aforementioned rust issue, which frankly Ford’s response too has been quite dismissive.

A spokesperson from Ford told me, regarding the rust issue: ““While some F-150 underbody steel components may show signs of surface rust, this will have no impact on part performance or life.”

Even if it’s cosmetic only, a new truck that costs upwards of $50K or more should not have surface rust after only a few miles. 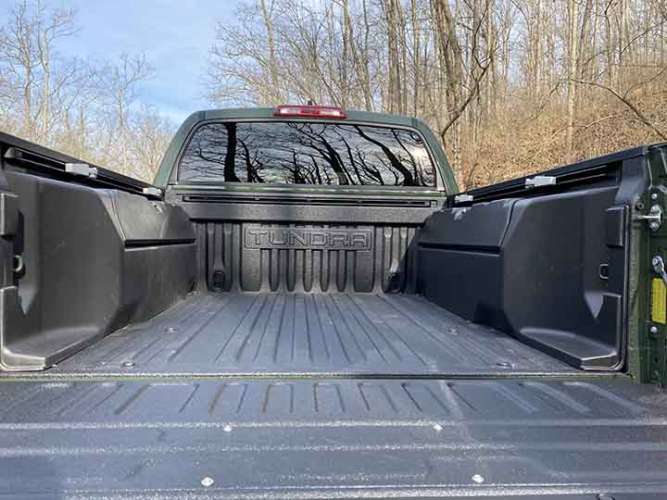 Value – The Tundra has a truck that you might actually want for just under $33,000. Meanwhile the bare boned F-150 has an MSRP less than the Tundra, this stripped-down truck would be fine for a work truck, but for today’s truck consumer, as you start adding the features you want, the F-150 gets very pricey. Not to say the Tundra doesn’t either, but in the end, a nice truck with quality amenities will cost you less in a Tundra than an F-150.

Of course the 2021 F-150 has all those extra niceties that the Tundra doesn’t so you have to determine what certain features are worth to you.

So, in the ultra-competitive full-size truck segment, the F-150 is the king. But the Toyota Tundra has been around for a long time and has a loyal following. Comparing and contrasting shows two quality trucks with many features. In the end, while I give the nod to the new F-150, you can’t go wrong with either.

If you didn't see my take on why the Ford Ranger was better than the Toyota Tacoma check it out here.

As always, leave me your comments on whether you agree or disagree.

JohnIL wrote on March 7, 2021 - 4:17pm Permalink
Won't buy another F150 after my 2018 lease is up. The 10 speed is certainly not what I consider a solidly engineered trans. GM even gave up putting them in their Silverado trucks moving to a move conservative 8 speed model. Yeah 8 speeds are plenty and 10 is too many with well designed turbo engines. What Ford did was create a lot of complexity for little gain and those out of warranty costs will hurt. Even with the Ecoboost engines the longevity comes into question with carbon build up and turbo failures. No I prefer to keep it simple and many Ford techs say buy the V8 not the Ecoboost engines.
John Jimpkins wrote on March 28, 2021 - 10:22am Permalink
Own a 2019 F150 Crew Cab with the 5.0 V8. After having previously owned f150s with the 3.5 ecoboost and the 2.7 ecoboost. The 3.5 is great for hauling and towing. The 2.7 is great in an urban environment as the low RPM Torque is great and the fuel economy is pretty decent. The current 5.0 V8 model I own is smooth, full of power and actually seems to get better MPG on the freeway than either turbo 6 I have owned. This is especially evident in the winter time. Never had even a minor issue with the F150. Will continue to purchase over and over again.

Tsingshan's Threat to Tesla: EV Maker Is In Battery Crosshairs
Tesla-Funded Research Reveals One of The Biggest Mysteries of EV Battery
END_OF_DOCUMENT_TOKEN_TO_BE_REPLACED