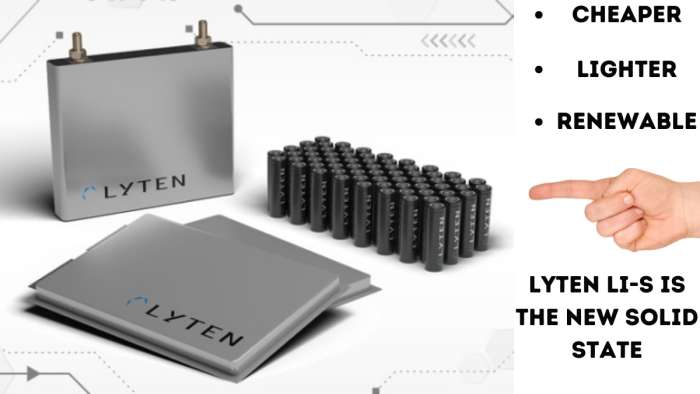 We have been hearing the hype over solid state for years now. Finally Toyota and other companies have put it into testing. Now another contender is here to out perform solid state, take a look.
Advertisement

What is this "better battery," and how close to the market is it? In this article, I will answer all I can about Lithium Sulfur and the promises it brings to the table.

What is Lithium Sulfur?
Lithium-Sulfur or Li-S is another sibling in the lithium-based battery family. 3D graphene-based battery was kept a secret by the Lyten company developing this technology for the US military.

Lithium-Sulfur batteries are again just another sibling in the lithium family. Solid-State batteries are also in that family; however, each lithium variant is slightly different. That makes each rendition a bit better than the previous one.

What Is So Great About Lithium-Sulfur?
Several things make Li-S a fantastic feat of technology. Solid State technology is impressive, with better energy density than lithium-ion, which carries about 250-270 wh/kg. Li-S batteries are showing a gravimetric density of 900 wh/kg, smashing Li-Ion.

Solid-state is still a major contender in all of this thought. According to an increasingly popular battery manufacturer Quantummscape, their Solid-state battery has anywhere from 400-600 wh/kg.

While that is a significant advantage over Li-Ion, Li-S still shows more available energy density and has other benefits. With sustainable power for over 1400 cycles, Li-S is no joke. If you think about 1400 cycles and what that means, here is how it can be broken down.

If a company, say Toyota, put Li-S into a car that goes 500 miles per charge and you can do that 1400 times, that is 700,000 miles. Think about that for a moment. Have you ever driven a vehicle more than 2 or 300,000 miles? Some people do it, yes, but how often does that happen outside of the trucking world?

Another thing to consider is that these batteries are significantly smaller and lighter than Li-Ion by a wide margin. More lightweight and smaller could mean that vehicles get packed with more batteries initially. If that happened, we could see ranges of 1,000 miles or more on a single charge, and that is incredible.

Other notable items that give Li-S are:

I think that Elon Musk of Tesla Motors and Akio Toyoda of Toyota Motor are both aware of this technology but are taking their own approach to whether this technology will work for their companies.

I think that this battery technology shows incredible promise and that we could see the next generation of EVs be our "savior" in solving the oil crisis we are in currently.

That is all for this one. More to come on Li-S batteries as soon as I hear more from Lyten. Thank you all for reading and remember, Today's Adventure is Tomorrow's Story.

Want to know how the AGPLB Turned out? Take a look here.