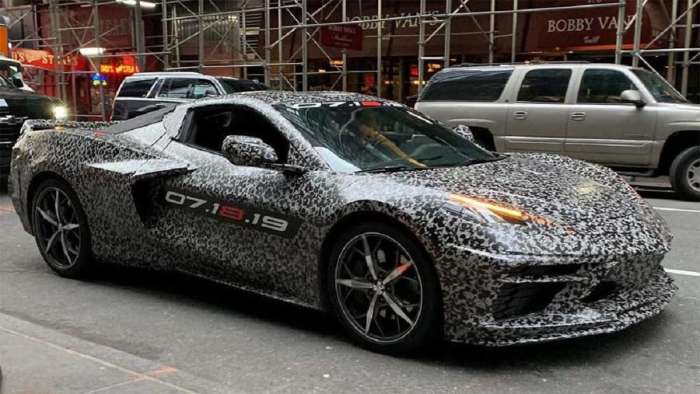 GM missed an important "track time" selling point with the C7 Corvette and they aren't going to do it again. Rumor says C8 Corvette is at Nürburgring specifically to test it's cooling ability.
Advertisement

The C8 Corvette has been seen once again testing on the Nürburgring just recently. If you remember correctly there were a slew of spy shots early on in the C8 game showing the car overseas testing around the world famous track to see what kind of performer Chevrolet had on their hands. Now the car has been seen at the ring (this time with the 7-18-19 reveal sticker on the side) to show off it's mechanical prowess once more. There is rumor over at the Corvette Forum that suggests the car is there specifically to test it's cooling ability.

This is awesome to see because for those of you who haven't heard the C7 Corvette had its fair share of cooling issues. It seems GM is testing this to the fullest extent early on in the game to make sure this car is 100% ready for the spotlight that is coming very soon (17 days and counting!)

The only update to the car physically that we didn't see the first time around at the Nürburgring is the reveal date on the side. It is being speculated that the car we are seeing there is in fact the same one that was there earlier in the year which is basically implying that it never left.

Why This Track Testing Matters for C8 Corvette.

The C7 Corvette is a beastly platform, we all know that by now. One of the biggest fails that car encountered was the lack of track times recorded and advertised by Chevrolet on the Nürburgring. The track in Germany serves as a benchmark for most performance cars and helps potential track goers to pick their cars of choice wisely. Unfortunately, GM never officially published track times for any of the C7 Corvette models. This is speculated to have hurt the 7th generation Corvette sales. Obviously this isn't a mistake GM plans to make again, thus their decision to have the car at the track again. As with most of the Corvette lineup the C8 will be heavily track focused so testing this car on a track as demanding as the Nürburgring is almost a must!

I can't wait to see this car "in the flesh" and finally get to see it's performance officially on paper! July 18th can't get here soon enough!

See you in my next story where I discuss why the C8 Corvette is going to change the way you look at Corvettes.