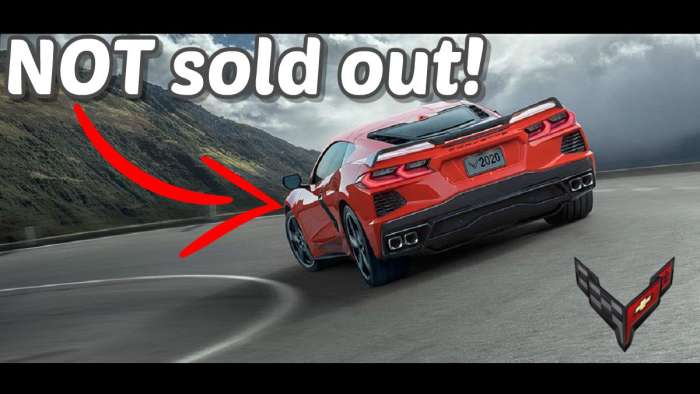 The 2020 C8 Corvette Is Not Sold Out, But It Is Selling "Fantastically" Says GM.

The C8 Corvette is in fact, not sold out. GM recently went on record and said that the new 2020 C8 Corvette was selling "fantastically" and at a record pace, but they absolutely wished the original statement of, the C8 Corvette being sold out, had not been made.
Advertisement

By now you have surely read the massive amount of articles about the C8 Corvette being sold out and apparently GM saw them as well because they felt the need to clarify that statement. They recently went on record and stated that it is not sold out but it is selling "fantastically" and will likely sell more than previous generation Corvettes in the first year so fret not, my fellow Corvette fans, you still have the ability to own one.

The C8 Corvette has been widely discussed for a long time and well before it's actual arrival on stage. Some loved it and some hated it before it ever even showed its face. In the beginning, I was seeing around a 50/50 love/hate situation on this new Corvette but after the launch on July 18th all of that changed. This C8 Corvette has a huge following at this point so it's not hard to believe when you read a title saying that the 2020 C8 Corvette has sold out but straight from GM, this isn't true.

The 2020 C8 Corvette has only been official for less than 12 days and we're already hearing this "sold out" thing tossed around. Of course, the only time the C8 Corvette will actually be "sold out" Is after the generation is completely up and the C9 Corvette is out on the streets. The initial allocations for the "first wave" of C8 Corvettes to be produced may be nearing the end, but that doesn't mean "sold out".

Can You Get A C8 Corvette Still?

You absolutely can. Contrary to popular belief this car is not sold out. Dealerships are still taking deposits for this car and will continue to get allocations based on how many they are able to sell. The first wave of allocations for this new Corvette are still available which means you would be guaranteed to get one of the first cars made. After the first wave has past you can still get one it will just be a few months later.

If you want a C8 Corvette as soon as possible, you should still hurry to your local dealership to see if they can get one for you because they are selling fast but, worst case scenario, you'd just have to wait a little longer for it.

Also watch The C8 Corvette is not sold out, GM confirms. Leaked pricing for the Stingray. Zora instead of ZR1?, as well as Click To Subscribe Torque News Youtube Channel for Daily News on Automotive Industry.