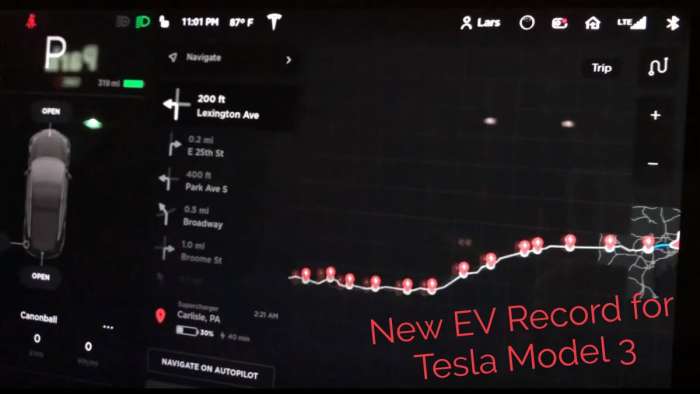 For anyone who has ever uttered the words "you can't get across the U.S. in an EV," this family vacation in a Tesla Model 3 just made it look easy.
Advertisement

There are many misunderstandings (or outright myths) that those of us who argue in favor of electric vehicles hear, not least of which is the common refrain that "you can't road trip in an EV." Tesla has, of course, destroyed this notion with its rapidly expanding Supercharger network, and the Tesla Model 3 has put that kind of travel within reach of many more Americans than its predecessors.

The idea of driving across the country, however, provides a special kind of test that is iconic to the United States. It is summed up by the 1981 movie The Cannonball Run, in which Burt Reynolds and an all-star supporting cast charge from East to West in a Wacky Races-esque caper.

But could Burt and co. have won the movie's $1 million prize in an electric vehicle?

If we listen to the naysayers, he'd be dealing with a dead battery before he got to the New Jersey border. Thankfully, there are increasingly more and more examples of EVs making the trip without incident.

"What If I Wake Up and Want to Drive to California?"

This is a genuine question that I've overheard several times, as people here in the Eastern portion of the United States ponder the capabilities of my 2017 Chevy Bolt EV.

On the subject of the Chevy Bolt EV, here are a few ways it still outshines its rivals for the affordable EV crown.

While the question held some weight when I first started to drive the Bolt, I'd argue that the trip is now entirely possible. Note that I didn't use the words "easy" or "expeditious" in the case of the Bolt EV, but with Electrify America spanning the states, it is certainly a possibility.

In a Tesla Model 3, however, the coast-to-coast trip is all of those things and more, as a Swiss family setting out from New York City prove in this video.

The car itself is something of a celebrity, as one of the first Tesla Model 3s that entered Europe. Imported to Switzerland in 2018, the black Model 3 LR RWD was used by a variety of analysts and media observers to run the rule of Tesla's latest vehicle before its wider European release earlier this year.

So this isn't a car specifically designed to achieve the Cannonball Run record, which was previously set at 50 hours 16 minutes. It isn't even professional drivers or journalists seeking a story. This is a regular family on holiday setting this EV record, whose only advantage is that they know Teslas inside out!

Take a trip back in time to see how quickly a Tesla Model S could make this journey in 2014.

The video covers the route and visuals, so we'll let the stats speak for themselves in summary of this impressive effort:

Remember that this is with A/C on the whole time and a car suitably loaded for three passengers on vacation. Admittedly, summer and the southern route certainly provide ideal conditions for the trip, but the Tesla Model 3 clearly handled the route comfortably and efficiently.

Back in the Real World
Although this is a fun story to report and a worthy entry into the annals of EV achievements, ask yourself a simple question: who wants to do this journey in two days?

First, there's the speed and fatigue. If you're in a hurry, flying is inevitably the way to go. Rushing to get somewhere as a driver isn't exactly a relaxing experience. If you're on vacation, it seems positively counterintuitive.

In the real world, road trips like this are supposed to be about exploration and discovery. You want to drive to interesting locations, experience new places, linger a while to explore, and presumably stay overnight a number of times as you work your way across the states.

If I were making this trip, I'd not only be planning charge stops, but also fun places to visit, unique places to eat, and anything else that would make the most out of a rare opportunity to see the country. Far from detracting from the experience, EVs align very well with that type of journey.

It's clear that electric vehicles are now eminently capable of delivering this kind of experience across most of North America. There are inevitably some exceptions, with the likes of North Dakota still a very difficult state to traverse in any EV, for example. But this record-setting attempt is simply an extreme example that emphasizes something we already know: electric vehicles are improving with every passing month.

Have you taken a long road trip in your electric vehicle?

Let us know where you went and how far in the comments.

DeanMcManis wrote on August 4, 2019 - 1:56pm Permalink
I found it impressive that they crossed the country for just $136 (for the electricity). If you figure a regular car getting 30 MPG and gas costing $3 a gallon that is $360. I would have also taken some detours and extra time to see the sights along the way, but they were clearly on an EV mission to cross the country as efficiently as possible. Kudos to them.