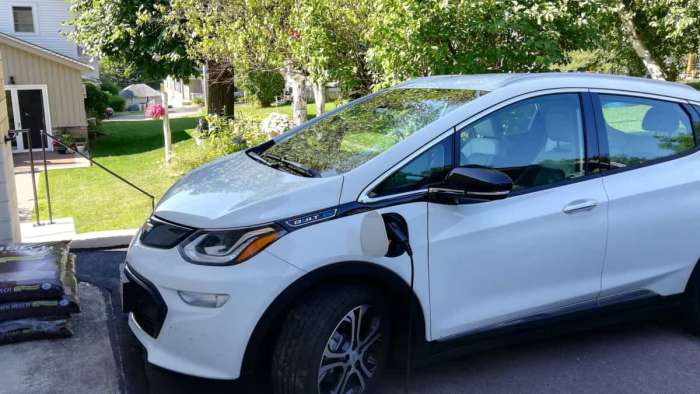 How the Chevy Bolt EV Still Outshines Its Rivals

The 2019 Chevy Bolt EV is largely the same car conceived and designed years before its 2016 launch. Although some areas inevitably feel dated, there are still several aspects of this underrated electric car that keep it competitive.
Advertisement

The Chevrolet Bolt EV arrived in 2016. GM’s first long-range all-electric car is based on a design drawn up several years before we knew anything about Tesla’s Model 3.

It was the first (relatively) affordable EV to market and its current model year, the 2019 Chevy Bolt EV, remains very similar to the first edition. Inevitably, the Bolt is beginning to show its age in some ways.

Last week, I wrote about 3 Ways the Chevy Bolt EV is Already Outdated. I also praised the car and offered some suggestions for improvements that GM could make. What I didn’t do was cover the many areas that the company got right the first time around.

This article redresses the balance somewhat, by focusing on aspects of this often under-appreciated electric car that don’t get the praise they deserve.

To my mind, driving the car every day both locally and on long trips, these are:
1. Well-balanced Digital Dash
2. GM’s Application of One-pedal Driving
3. Efficiency and Driver Feedback
4. Deceptively Spacious Cabin

As with the improvements article, let’s dive into each of these and see whether you agree with my observations. As an aside, I’ve also spent a reasonable amount of time driving the Tesla Model 3 LR, so don’t be too surprised if some comparisons veer towards that vehicle.

Speaking of veering off course, here's my colleague Brian Jenkins on Tesla Autopilot is Amazing, But Don't Sleep At the Wheel!

There’s a lot going on across the Bolt EV’s digital dashboard, but you won’t have to wade through menu after menu to find what you need. It’s bright and clear, with just the right amount of information displayed in a satisfyingly futuristic way.

Unlike the Model 3’s all-in minimalism, some drivers still prefer to have information displayed directly ahead of them. This makes the Bolt EV feel like less of a leap from cars they’re already familiar with. Tesla has an exceptional reputation with the tech crowd and drivers who want something unapologetically futuristic, but not everyone in the market for an EV has that early adopter mindset.

My preference tends towards wanting to receive maximum information, so we’ve set the ‘Enhanced’ driver dash panel as the standard in our 2017 Bolt EV Premier. That provides not only an expected range, then a maximum and minimum on the readout, but also the power output on the opposite side so the driver can see when energy is used excessively or recouped via regenerative braking.

The Bolt EV has two primary drive modes, D and L. You can also pop the “Sport” button for more spritely acceleration in either mode, but the fundamental difference comes from the choice of D or L and how they influence regenerative braking (or “regen” for short).

In D, the Bolt EV still provides some regen but will also coast, offering the feel of a traditional gas car. In L, it will slow much more quickly as you ease off the pedal and come to a complete stop without touching the brake.

I almost think I’d be disappointed if GM significantly adjusted anything in the way the Bolt EV delivers one-pedal driving. Once you get used to the more aggressive regen in L and learn to moderate the accelerator to smooth out the ride, the Chevy Bolt EV is an intuitive and seamless electric drive.

Watch me run through the pros and cons after two years in a 2017 Chevy Bolt EV below and be sure to subscribe to Torque News Youtube Channel for more News on EVs and the Auto Industry.

An Efficient EV with Valuable Info

While not quite on a par with Hyundai’s ultra-efficient Ioniq sedan, the Bolt EV delivers excellent efficiency and range in all but the worst conditions. In summer, it’s not unusual to hear from Bolt owners pushing well past 300 miles on a single charge.

Part of this is down to that effective application of one-pedal driving. Recapturing energy is intuitive after just a few journeys and the car delivers all of the information you need to improve technique and squeeze even more out of every kWh the pack can offer.

No, you won’t top 200 miles of high-speed highway driving in the depths of a New England winter with the heater blasting, but the aforementioned dash display keeps you well-informed on how you’re doing. More often than not, we’re able to hit that EPA range of 238 miles easily and get a whole lot more out of the car in daily driving.

Bigger On the Inside

This one will sound odd coming from what many consider a compact car, but the Bolt EV is a surprisingly spacious vehicle.

Up front, the floating console leaves a big open space down below, with plenty of room to store small bags, snacks and the like. The center armrest hides a narrow yet ridiculously cavernous storage bin that will swallow books, electronics, or anything else you might want to stow away for a rainy charge session.

As a driver standing a couple of inches taller than six foot, I’ve had adults the same height slide into the seat behind me with plenty of legroom. With two kids back there more often than not, the flat floor design and stadium seating - because they’re sat on another layer of the battery pack - give occupants plenty of room to stretch out and a great view. "I Spy" is a lot more fun when you can actually see what’s going on outside the vehicle!

To give the 2019 Niro EV its due, reviews suggest that Kia managed to squeeze more space out of their vehicle than the Bolt EV offers. However, that comes in a car that’s more than eight inches longer than the Bolt, meaning you lose some of the advantages of the latter’s compact shape. The Niro EV is also a redesigned version of an existing gas model, while the Bolt EV was designed as a purely electric model from the outset.

So although there are inevitably things that I would improve about the Chevy Bolt EV, as I’d expect any vehicle owner to acknowledge, there’s no doubt in my mind that GM made an excellent electric car that still shines in today's EV marketplace.

If all this stokes your interest in affordable electric vehicles, read my colleague John Goreham's informative story on where You Can Buy a New Bolt, Ioniq, or Leaf for Under $20,000

Watch out for my next Chevy Bolt EV story, which will gather together the various rumors surrounding the 2020 Chevy Bolt EV, the already trademarked Bolt EUV, and perhaps even a concrete announcement from General Motors on the subject! See you in the next story where I discuss 3 Reasons the 2019 Nissan Leaf Lost the Brand Its EV Lead.