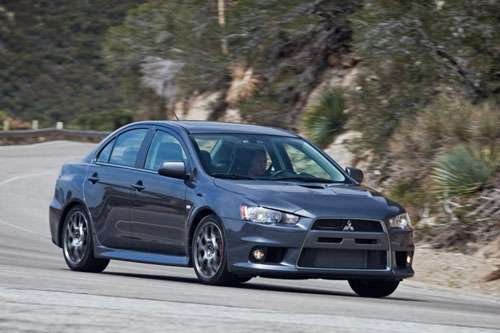 Masuko says Mitsubishi Evo may not be dead yet

The Evo X - or as it's officially known, the Mitsubishi Lancer Evolution X - is destined for the scrapheap of history. Those in the supposed know have reported that with Mitsubishi's new self positioning as a green company, the battery electric iMIEV a case in point, high performance cars are on the way out.
Advertisement

The company must be green, he said: "We recognize that automakers have a responsibility to take the lead in developing environmental initiatives... Our goal is to be a world leader in the reduction of CO2 emissions on a global scale."

However, Masuko added that "Production of the current Lancer Evolution X continues as planned."

That gives the rally racer for the road a lease on life probably through 2013. The Lancer Evolution X takes its name from world championship rallying where the cars are "evolved" from standard production models. The "X" in the Lancer Evolution's name indicates that the current model is the tenth generation.

Masuko went still further, saying that there would be a car that replaces the Evo X when it expires: "As for [the Lancer Evolution X's) successor, regulations and market feedback will dictate its engineering package and architecture. MMC has kept the Lancer Evolution sedan evolving as the brand's highest performing model in the global market. However, as the market's needs and demands change, MMC is considering not advancing the Lancer Evolution concept in the same way as before, but to find a different direction for the Lancer Evolution to evolve. The new direction, the technologies involved, and corresponding products will be disclosed in due course."

In other words, there will be another Lancer Evolution, and it will be the same, only different, probably just as fast but definitely a lot more green.

Tesla Contemplates A New Strategy for China Retail even As Sales Boom
Jay Leno on Elon Musk & EVs: “I Think He Should Get ... Credit"
END_OF_DOCUMENT_TOKEN_TO_BE_REPLACED