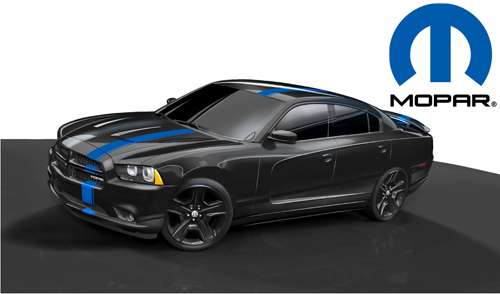 Dodge today released a sketch of the 2011 Dodge Charger Mopar, or as Dodge refers to it, the Mopar ’11 Charger, a follow-up to the 2010 Dodge Challenger Mopar. Dodge was mum on the details--they'll come later this month--but we know a little about this year's special MOPAR Dodge from what we know about last year's.
Advertisement

The 2010 Dodge Challenger Mopar was a limited production version of the Dodge Challenger featuring the accessory parts bin from Chrysler Group’s "service, parts and customer-care" division. Mopar became famous as the source of Chrysler Corp factory performance parts during the muscle car era of the Sixties. There was never a collaboration between Mopar and Dodge or Plymouth, however, to build a special car.

Last year there was. The 2010 Dodge Challenger Mopar was based on the basic Challenger R/T, including the 5.7-liter Hemi, but added a special hood, a cold-air intake, front strut tower brace, 20-inch Mopar wheels and other items from the Mopar performance parts catalog. It was available in three paint/stripe schemes, and all came with a serialized dash plaque that will make the Mopar Challenger a special focus of attention at future Chrysler/Dodge enthusiast meets.

“After the success of our Mopar ’10 Challenger, we moved on to the iconic Dodge Charger and added even more performance,” said Pietro Gorlier, president and CEO of Mopar. “As a new company, we will continue to leverage the heritage of the Mopar brand at every turn.”

When we learn more about the 2011 Dodge Charger Mopar, we'll pass the word. Meanwhile, expect the Mopar '11 Charger to be a lot like last year's Challenger, but just with two more doors. And if last year holds true to form, expect arrival in August.