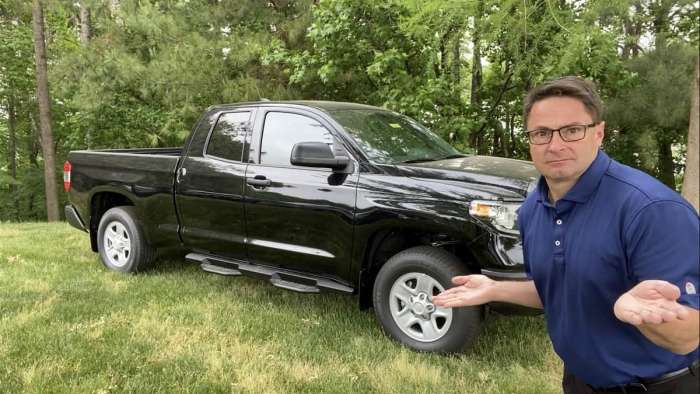 Why Toyota Has Not Released 2022 Tundra Details Yet

Toyota Tundra fans are anxiously awaiting info on 2022 Tundra. Here is why they may be waiting a little longer.
Advertisement

If you are reading this article, the odds are pretty strong that you may have interest in learning more about Toyota Tundra. Specifically, more about the next generation 2022 Toyota Tundra.

Yes, 2022 Tundra certainly is a hot topic these days.

I have written multiple stories for Torque News detailing what I think 2022 Tundra will be like. Although much of it has been speculation, most of what I have written will prove to be absolutely true.

We will see a twin-turbo V6 engine. My guess is a 3.5-liter, but it could be 3.7-liter. We will see a new Tundra CrewMax cab configuration with a longer bed than 5.5 feet. We will also see a Tundra Hybrid.

Look for “new-to-Tundra” coil spring rear suspension. This should provide more vehicle flexibility and the ability to absorb more impact on and off the road. Ride comfort for both driver and passengers will be a key benefit here.

And, of course, look for significant improvements to Toyota Tundra current power ratings of 381 horsepower and 401 lb.-ft. torque. 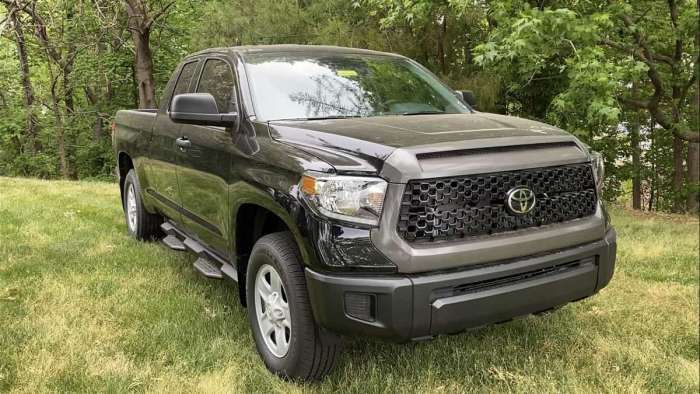 Truthfully, I fully expected news on 2022 Toyota Tundra to be released around the time when so much breaking news has come in the past from Toyota. Around February and at the Chicago Auto Show.

This did not happen. I would expect this may have been due to the pandemic and Chicago delaying their show this year.

So how come no news yet? I mean, it IS May already.

Well, Toyota is famous for only releasing information when it is good and ready. You typically do not see many teasers or short video promos before Toyota is ready to release all information at once.

This news may can come in the form of a press release on their website. It may come as part of a livestream broadcast for the world to see at the same time.

The other reason for delayed 2022 Tundra news is that Toyota is what I would consider to be a secretive company. It likes to hold information back purposely. This could serve as a competitive edge versus other vehicles in each respective market segment.

Also, Toyota may be holding their cards close until all specifications are locked in. Toyota is currently still testing camouflaged 2022 Toyota Tundra trucks out west. Toyota may literally not be ready or able to reveal quite yet.

I have one other theory as well. But I sure hope this is not a factor. The worldwide automotive vehicle shortage is severely impacting not only Toyota dealerships across the country, but pretty much all other manufacturers as well.

Drive by your local dealers and see just how empty their lots are.

Please Toyota. We do not want to see a 2022 Tundra delay. December cannot get here soon enough already.

I opened this discussion up to my “Toyotajeff” YouTube channel viewers and Torque News / Toyota News readers.

Ryan commented. “…I will say this, if it (2022 Tundra) is anywhere close to the scale of change the Sienna just went through it will be a fantastic update. I also agree with others on this board, what good are all the innovative features if they (competitor trucks to Tundra) continue to have issues and constantly need fixed? I'll take the reliability any day over a fancy added gadget. The biggest issue here is how long they've trotted out the same truck and expect sales to continue at a steady level. Hopefully, we fix that, and the new Tundra finds a way to get the MPG without sacrificing the power people expect in a full-size truck. Cheers!”

VIDEO YOU MAY ENJOY: My review of 2021 Tundra TRD Off-Road in Army Green

Kevin added in his insight. “Automotive press says the 2022 Tundra will be revealed around June. According to that engineer who is a consultant for Toyota, the specs and teasers will not be released like other companies do because Toyota is more secretive and doesn't typically release teaser specs or pics. There is a rendering from that engineer of what he thinks the next Tundra will look like based on camouflage pictures that are out there.”

Double Dutch added. “I work in sales for a Toyota dealer in Canada and to a degree I agree on the press release procedures, however it is not due to lack of the truck itself but more due to Toyota holding their cards close on this one. I've been told through the grapevine that the hybrid (Tundra Hybrid) will be pushing over 500 foot-pounds of torque. I have also been told that the fuel will be 30+ mpg. Although I have to see it to believe it.”

Time for your thoughts on Toyota Tundra

I do not know when Toyota will reveal information on 2022 Tundra. I have heard conflicting rumors that Toyota will release its first details in June, but also in September.

This confuses me. I guess I will patiently wait like everyone else.

Do you have any thoughts on Toyota Tundra and what might be coming for 2022 model year? Have you heard any rumors you would like me to research for you?

If you were to consider a 2022 Toyota Tundra, would you go for the gasoline or hybrid version?

Josh Spencer wrote on May 3, 2021 - 4:07pm Permalink
My wife and I purchased a 2021 Sienna two weeks ago and my dealership said their first 2022 Tundra will be arriving in November. Hybrid all the way for me. The Sienna is our first hybrid vehicle and we love the versatility of it.
Pr wrote on May 4, 2021 - 11:03am Permalink
2023 Tundra Chip shortages is going to make the 2022 update non-existent
Toyota in Alaska wrote on May 4, 2021 - 7:39pm Permalink
I’m ready to move on. A couple things have soured me on them despite driving Toyotas since 1986. My local dealer’s additional markup (since they have a monopoly in Alaska) and the lack of information on upcoming products. Nissan is beating them on both of those score cards. I’m ready to try another brand after 35 years of loyalty.
D-Mento wrote on May 5, 2021 - 8:34am Permalink
I am done trusting that Toyota will do the right thing with the Tundra. IMO the tundra has been made cheaper and cheaper since the refresh in 2014. A common frame across multiple platforms is the latest Toyota innovation to save them money. The only reason Toyota has not released 2022 Tundra news yet is because they are still trying to figure out a way to spin Garbage into Gold. Or how to hold back features or options to extend the selling life later when people recognize what is happening . People are seriously getting excited about a Tundra Hybrid which may hit 30 MPG ?? If this is real I ecpect the V5 only to get 20-24 which is not good. The Ram 1500 is already producing 32MPG in their eco-diesel. These days Toyota seems more concerned with selling luxury trucks then real "Trucks". I am moving on this year an getting a truck which was not scraped together from old lexus parts.
Wilson Taft wrote on June 3, 2021 - 3:58pm Permalink
It’s a reliable truck that can outlive all the other ones that have this fancy technology. Toyota is holding their cards close because what’s about to come will rock your world. V5? You shouldn’t comment if you know nothing about cars dude. Consider taking up bird watching.
TWC wrote on May 6, 2021 - 2:54am Permalink
You won't get more than 10,200 pounds towing or higher payload capacity than around 1800 pounds like a Tundra is rated currently. Not if they're going use coil springs in the rear, instead of leaf.
Jrsme93 wrote on May 6, 2021 - 8:00am Permalink
You are an engineer? The RAM 1500 can tow more than your imaginary numbers.
Ron A wrote on May 14, 2021 - 10:54pm Permalink
Maybe they're waiting to see what Ford announces with their F150 Lightning first and then respond.
Toyota Sales wrote on May 15, 2021 - 2:04pm Permalink
The chip shortage will not affect the 2022 Tundra, they had already ordered and secured plenty for future production. The current iteration is the one that has the shortage.
AK Fish wrote on May 17, 2021 - 10:38am Permalink
Since they are allowing orders for new (old) 2021 Tundra models til July, they don't want to release any details on the new 2022 Tundra until after the July order date for 2021 models passes. Of course the ongoing chip shortage will stifle any production of the 2022 Tundras as it is impacting the Big 3 pickups.
George Hetherington wrote on June 29, 2021 - 7:28pm Permalink
I have my 2006 double cab that I bought new, that has been amazing, but it can't tow the 7500 lb 5th wheel trailer I want to buy. I haven't bought a new truck waiting on toyota to come out and replace the 15 year old design that gets lousy gas mileage. At 74, this is the last truck I will ever buy and I am going to have to buy something soon. But I still don't know what the specs will be on the new design or if it will satisfy my needs. Toyota better announce soon or I am going to buy a Ford.