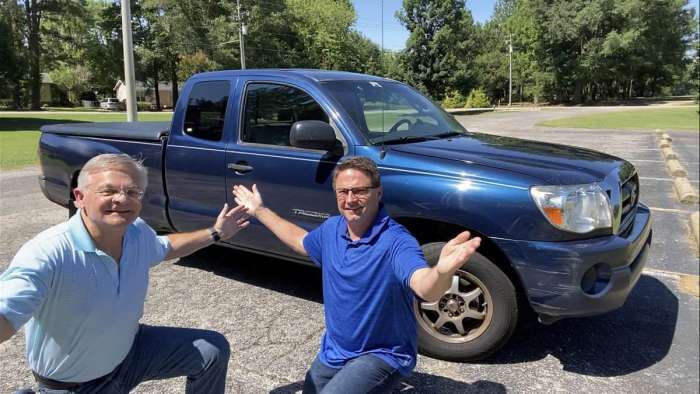 This Toyota Tacoma Has 1.5 Million Miles, BUT Its Owner Has an Even More Remarkable Story

Meet Mike Neal and his 1.5-million-mile Toyota Tacoma. You will not believe his story.
Advertisement

We will run across stories of countless numbers of vehicle owners who have racked up extremely high mileage over the years. Some people accumulate miles for their jobs. For pleasure. Or maybe just to accommodate their family interests and lifestyles.

However, we will never meet anyone like North Carolina resident Mike Neal and his Toyota Tacoma. In my opinion, this is “the world’s most famous Tacoma.”

Mike and his famous Tacoma 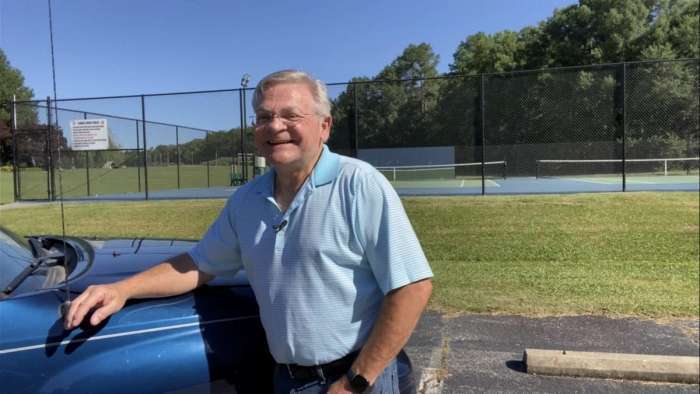 Mike is the proud owner of a 2008 Tacoma. I recently spent some time with Mike and his famous Tacoma. We discussed its history and how he got so many miles in such a short time.

We also took a short drive. I mean, we need to know what condition a Tacoma might be in after 13 years and one and a half million miles.

Sure, the truck has its share of love taps and scrapes and dings. But overall, the exterior is in good shape. Better than you might expect. The seats have held up remarkably well, too, after all these road trips.

And the truck rides surprisingly smooth. It is fairly quiet even at highway speeds. Call me shocked.

How Tacoma got high miles

Mike uses his 2008 Tacoma mostly for work. You see, he delivers nuclear medicines that are used in PET Scans for cancer patients. These are used to detect whether cancer has spread, has stayed the same, or has decreased.
Clearly, this is an important and stressful time for patients, and Mike takes his work very seriously.

“I’ve gotta be there on time so the patient doesn’t experience a delay on my part. I can’t let them down. The patients are always number one to me. That’s all that counts.”

His trusty Toyota Tacoma truck drives Mike all around North Carolina and Virginia delivering his medicines. For about 500 miles a day. For around 2,500 miles a week. For well over 100,000 miles a year.

To keep things in perspective, I have owned my 2021 Toyota Venza since December and just reached 5,000 miles. I guess Mike wins here.

This is where the story gets even better.

Drive behind him on the highway and you will see the running mileage count.

Mike has been labeling the back of his Tacoma since he reached 640,000 miles. 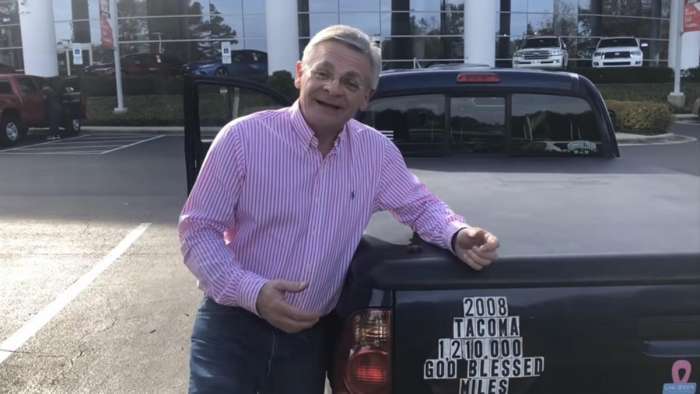 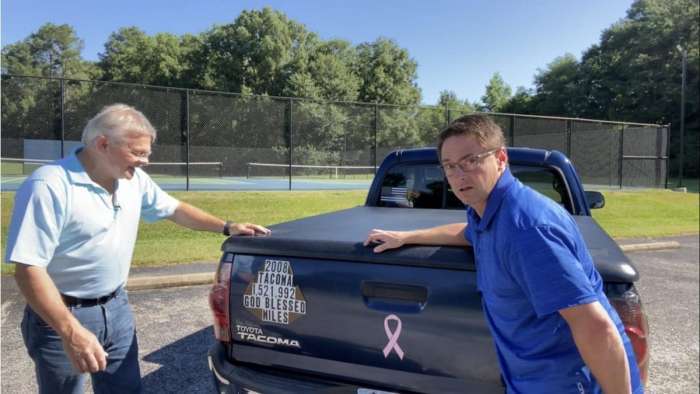 Are you kidding me?

Talk about believing in your product, all the while offering unlimited advertising for Toyota Tacoma and the Toyota brand.

“Thousands of people from around the country have seen the mileage go up.” Beamed a proud Mike.

Mike and his Tacoma have been recognized so many times over the years that it is hard to keep track of all the “celebrity sightings.” People pull up next to him and give him a thumbs up, they take their pictures next to his ride, and think he is famous at his local parts store.

The assistant in his dentist office even knew of his story and insisted on playing our original video (when the Tacoma hit 1.2 million miles). All the way through. During his appointment. 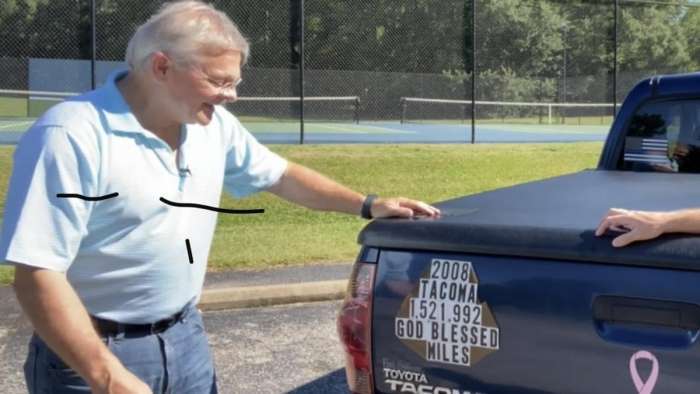 I was surprised to find the miles sign currently had a unique and unusual number. It has always been changed every 5,000 or every 10,000 miles. No single digits.

Like I said in this recent video, I challenge everyone to see if your miles can signify an important date for you. You just might be able to do it.

This makes me smile.

Mike Neal has a story 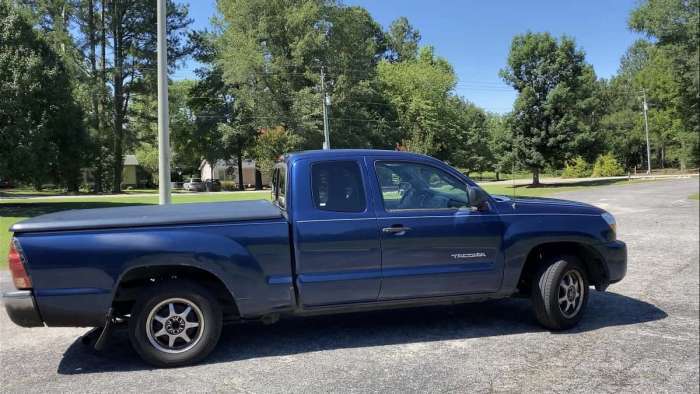 My new YouTube channel, AutoJeff Reviews, focuses on the people who own really special vehicles. I want to tell their stories. My feeling is that “every car has a story.”

As it turns out, Mike Neal has a really cool story about why he does the work he does.

While on our drive, Mike opened up and told his backstory. He clearly became emotional, and I am sure it was not easy to open up and share.

“When I was five years old, I was put into the children’s home in Oklahoma City. And I was adopted when I was 10.

Four years before I was adopted, my family, they were through having children. They had a nine-year-old daughter that died of cancer. I never met her, and I don’t know how you miss somebody that you’ve never met. But I miss her. 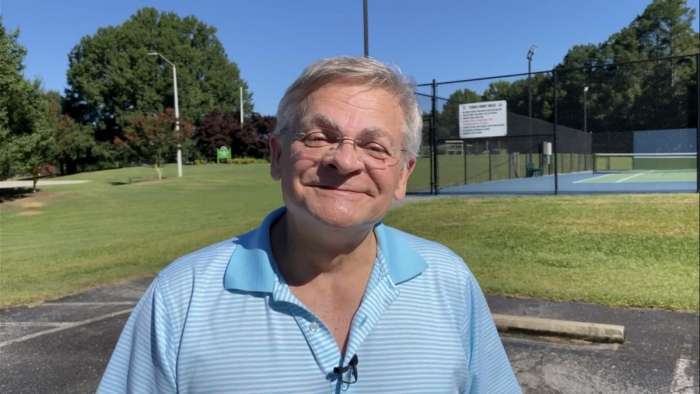 And from the first time that I delivered nuclear medicines to the hospitals, and I saw all the patients, my heart went out to them.

But I want to honor her (his sister) and do a great job. And be as kind as I can to the people who are there. And make sure that I’m on time.”

There is much more to Mike and his story. I encourage you all to watch the video, especially about eight minutes and twenty-two seconds in), for the rest of it.

VIDEO: Hear about Mike and the 1.5 million mile Toyota Tacoma 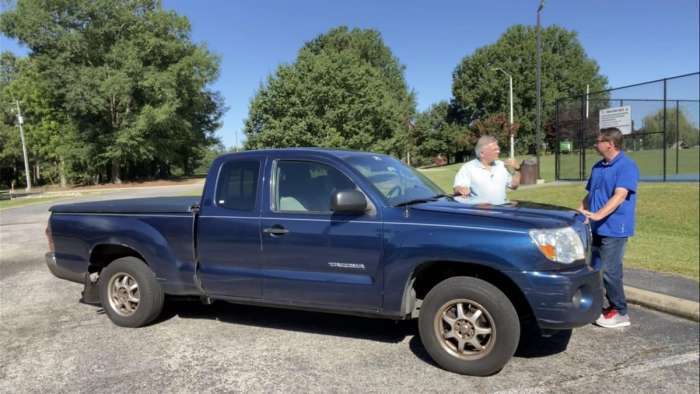 I guess this part goes out to the readers. And to Toyota.

Toyota, I feel that Mike Neal is worthy of the gift of a new truck. This is the part where you could step in. And I ask this with the most respect I can think of.

Mike Neal is one of the kindest, most genuine, most humble people I have ever met. He performs his work with care and determination.

Just like many people out there. Mike is no more special than anyone. He would never ask such a request.

And I know for a fact Toyota gets many requests all the time asking for a new vehicle for many different reasons.
But there is nobody out there like Mike.

Think about all the advertising Mike has done without asking for anything in return. That is my job (to ask for something in return).

And why does he have the sign on his tailgate anyway? 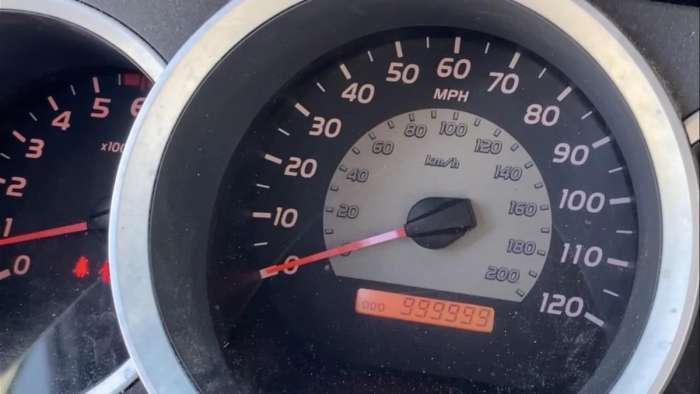 Surely, I cannot be the only person who feels Mike is worthy and deserving of a new truck from Toyota.

Apparently, I am not. Just look at the many comments (on my videos) from automobile and Toyota fans all over the world.

Rich said. “WOW!!! Toyota should give this man a free TRUCK with this free ADD.”

“To me it isn’t about the truck. It is about this man’s dedication to his truck.” Observed Pinoy.

Michael added. “Toyota should give him a new truck for free, because of his advertising message on the tailgate.”

YOU MAY ALSO ENJOY: Original video with Mike at 1.2 million miles

Anthony had a solid idea. “Toyota should buy back that truck from him or give him a new truck, he deserves it. Good publicity for Toyota.”

“The owner is more interesting than the truck. He seems like a genuinely sincere person with priorities set straight and humble. It’s the owner who took care of things for this truck to last so long.” Commented TarTacular.

“TOYOTA. Reward this man! Countless people are being swayed to buy Toyotas because of this great guy! I LOVE this story! Jeff, thanks for responding to my email regarding Mike. So glad to hear this update! Mike couldn’t be a better guy.” This one came from a viewer simply listed as “- -.”

Jarred, a fellow Tacoma owner, said. “That is truly never heard of a truck lasting that long. I have a 2009 Tacoma 4 cylinder with only 75,000 miles on it and this video makes me feel good knowing that Toyota Tacoma’s are truly built to last.”

J M J Will dropped this. “Keep us posted if Toyota reaches out to offer a new truck. Sad if they fail to do so.”

Hunter had similar thoughts. “I think Toyota should gift him!!!”

Even Mike’s daughter Alicia got in on the growing movement. “Not biased at allll, but my dad deserves a new truck! Come on TOYOTA!!” This one makes me smile too.

“What a legend! 500 miles a day, very humble and genuine guy.” Added Hassan.

Troy seems very passionate here. “This story is remarkable and the Tacoma mileage is a bonus to this wonderful story. God bless and YES TOYOTA GIVE THIS MAN A NEW TRUCK for the advertising as a bonus.”

Thomas had thoughts too. “Toyota should purchase this guy a new Tacoma.”

“Toyota, please put this guy on a Super Bowl commercial. Great video, Jeff!” Thanks for the kind words and the lofty commercial idea Marcelo.

BDevi0us wondered. “Why hasn’t Toyota gifted him a new Tacoma?” 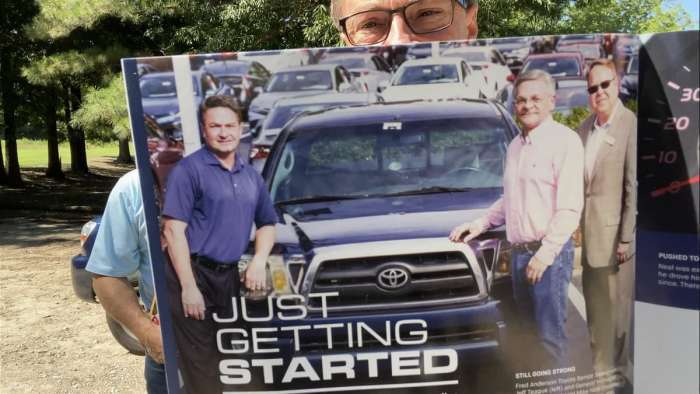 Dick said. “Someone hand that man a new 2021 Tacoma and a beer! He’s doing the Lord’s work and he has a chariot.”

“TOYOTA! Give this man a new truck he can enjoy for years to come. This TOYOTA truck has served a noble purpose and its owner deserves a gift!” Commented Greg.

I ran across many more similar comments. I could not list them all. But I do feel that the people may have spoken a little here.

Time for your Toyota Tacoma comments

You know, in the video Mike explains that his wife is ready for him to “retire his Tacoma” so she can use it for Lowes and Home Depot errands. In this scenario, he would use their Highlander for his deliveries (They also own a RAV4 V6. Talk about Toyota loyalty).

But Mike is not ready. In my opinion, this is a good man who is clearly very emotionally attached to his ride.

And can you blame him? Over one and a half million miles.

So, Toyota, I ask you this, and with a pretty please with sugar on top. Will you please consider gifting Mr. Mike Neal a new Tacoma?

If not for him, please do it for me. I know I have helped and positively influenced millions of people who either own or are looking at a Toyota.

My Toyotajeff YouTube channel has earned 32 million views and attains over 1 million views each month. My Torque News / Toyota News stories recently reached over 900,000 views in a month.

I feel I have been doing my part to help the Toyota brand. Just this kind little favor would mean the world to me.

Thanks for reading everyone. And thanks to Toyota for your consideration.

See you next story when I discuss 2022 4Runner TRD Pro colors.

READ MORE:
- Mike Neal and his 1.2 million mile Tacoma
- It was a record June for six Toyota models. See how your favorite did.
- The top selling Toyota hybrid may surprise you.