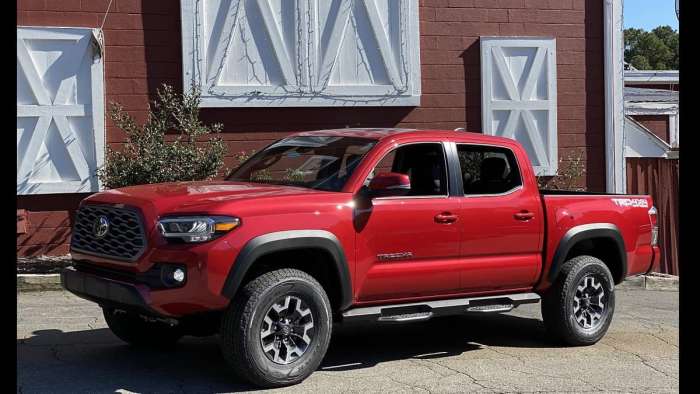 We asked Toyota Tacoma fans what they want from the next-gen Tacoma. How do their ideas and suggestions compare with yours?
Advertisement

I should explain. We Toyota Tacoma fans and owners are ready for pretty much any information on the next generation midsize truck offering.

As much as we are enjoying our 2021 Tacoma and previous year trucks, it is time to think about what comes next.

According to what most of us expect to find out soon (probably this month), a new Toyota Tundra will be announced and launched by the end of this year.

Toyota is the best at keeping news about new model years as secretive as possible. Very strategic with their announcements.

So, time to talk about what we want for next-gen Tacoma. 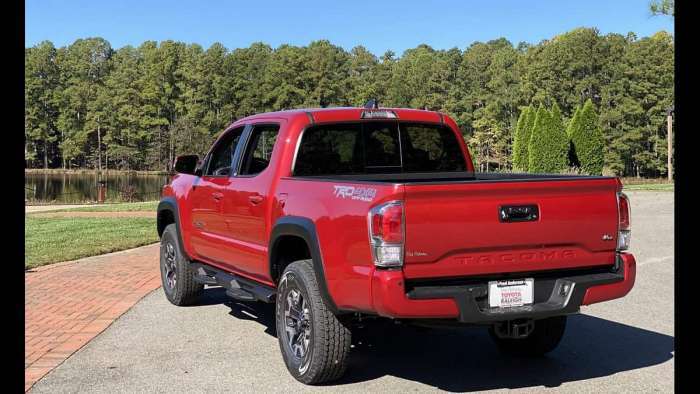 This is one of the most fun parts of my job – speculating about what new styling, powertrain, technology and safety systems will be next.

This is a tall order for Toyota Tacoma. A next-generation Tacoma wish list.

I knew I needed expert reinforcements for this task, so I checked in with the “Toyota Tacoma Enthusiast” online Tacoma forum for their feedback.

Time to see what they suggested.

Ryujun gave two cents worth. “Give us a small V8 or a turbo inline 6.”

Alex said. “I’ll take a boosted 6 banger, and a boosted 4 banger for the base.” 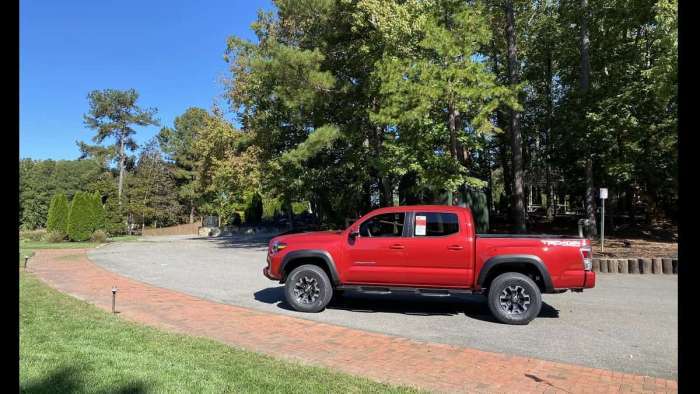 Cannon has heard some Toyota Tacoma rumors. “Have heard from some Toyota employees the 2.7 is going away in the next generation.”

For many Tacoma enthusiasts, passenger space and seat comfort are very important.

Barry said. “Biggest thing for me is seating position. Make the cab roof a little higher so you can have better seat adjustments. Sitting on the floor after long rides can get uncomfortable at times. Also, an 8-10 speed tranny. Had an f150 for a rental and it shifts so much smoother."

Moira exclaimed. “More head room...!” On a similar note, “Eww Da-vid!” I hope you all got my Schitt’s Creek reference.

“I wish the rear seat folded up so you could use a flat floor to load stuff like the f150s.” Hoped Dan.

Ken is seeing a green Toyota Tacoma and Toyota Tundra future. “They are going hybrid. Same with the Tundra.”

Lee wants a little more under the hood. “More horsepower.”

Alex is thinking of beefing up his Tacoma already. “Wheelwells that will accept 35's without a cab mount chop!”

Francis wants to get a grip on things. “A driver side pillar grab handle. Wtf Toyota.” And Dan responded to that. “Isn’t that a steering wheel?” 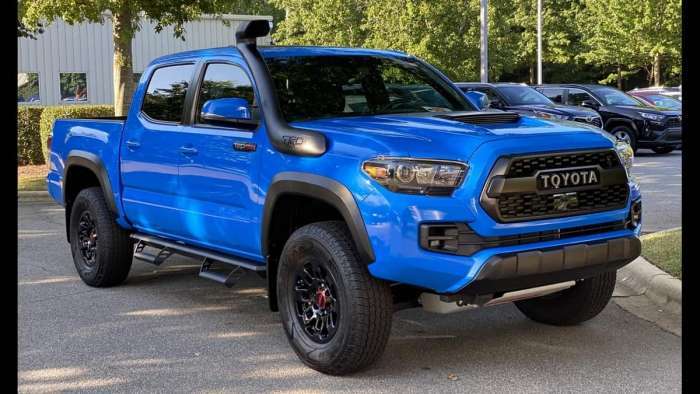 “I'd like to see a v8. They could literally put everything back how it was in the 1st gen without all the fancy stuff, offer a v8, and I'd 100% buy 1 in a heartbeat. Safety and power would be super ideal tbh.” Threw in Ray.

Jason and several other Tacoma fans had this similar thought. “DIESEL DIESEL DIIIEEESSSEEELLLLLL.”

Stephan has a wish list too. “Powertrain without a doubt. The current engine and transmission don’t work together. A hybrid option would be great. Aggressive looks are a must.”

“4.0 standard for all TRD not just the pro and for the love of god rear disc brakes...” Added Aaron.

Ed cracked the Toyota code. “I’m betting Toyota engineers have infiltrated all of these Tacoma groups. It is one huge think tank. I hope they improve on the obvious shortcomings.” Kris built on this. “One could only hope! Listen to your consumers, Toyota.” 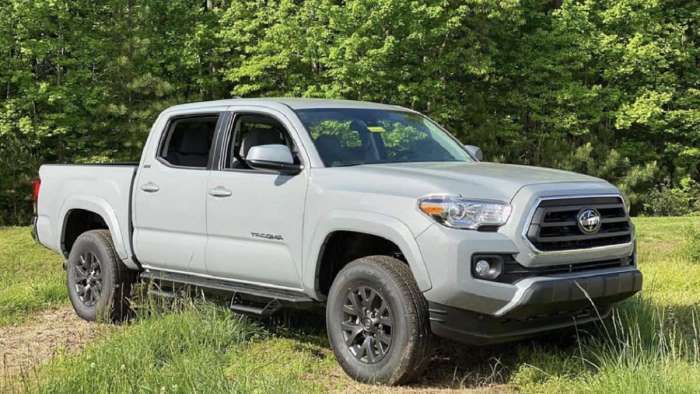 Joey has a specific request. “Rear disk brakes. Don't come at me with that "but they last 100k miles crap", I'd rather have the better stopping power and spend an hour changing them every 30k miles.”

“I'd be okay with a hybrid system, but I want them to keep a manual option. How about a stainless-steel frame, too? Questioned Julian.

Zack remarked. “A turbo option would be awesome. Supposedly the new tundra will have a turbo V6.”

Interesting thought about the turbo V6 Zack. Time will tell. And it will tell soon.

“V8 option!!! And a full roll down rear window like big bro!” Yes, Lindsay is talking about you Toyota Tundra.

And the last Toyota Tacoma feedback

Isaac put some thought into his wish list. “More options. Some of the things that a lot of people add anyways, like a winch, onboard air, ditch lights, etc. would be nice to be able to be had as factory options and therefore covered under warranty. Also, front locker, maybe a QD sway bar, a forced induction option (supercharger)... and a DCLB with a manual gearbox, lol... I realize those options would skyrocket the price tag though.”

“Front diff locker as well. Turbo 4-cylinder option, more gears on the transmission and some legroom in the back.” Another vote for rear seat legroom from Mustafa. 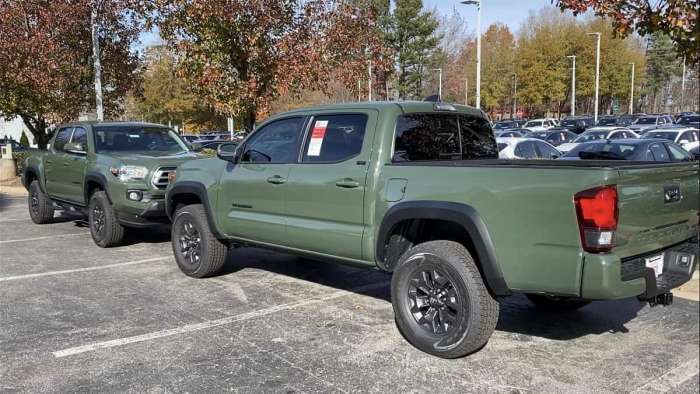 Em said. “Hybrid option. More leg room in the backseat. Option for TRD Pro to have a 6ft bed.”

“EV with quick charge with 500mi range and front locker.” This would fall nicely in with the Toyota EV plans for the future Wade.

“Back seat room would be nice. Especially for rear facing car seat.” I am with you on this one Tyler.

Robert had a very practical idea. “Make the walls/tailgate of bed deeper. 1-2 inches would make coolers fit when there is a top on it.”

Time for your thoughts on Next-gen Toyota Tacoma

This long and impressive list of ideas may help shape what is to soon become the next-generation 2023 Tacoma (well, or 2024 Tacoma).

VIDEO BATTLE: Watch as we debate Tacoma TRD Pro vs Tundra TRD Pro. Who wins it for you?

This is a great time for your feedback. It would be fine to assume that multiple Toyota employees assigned to design the next Tacoma will be reading this article.

Just a hunch. But a sound hunch.

Maybe they will see some of these ideas and roll with it.

So, leave a comment or two with your thoughts on what would make a great “next Tacoma.”

Thanks for reading everyone. See you next story when I talk about the 2021 Tundra model that is super hard to get.

Tesla-Funded Research Reveals One of The Biggest Mysteries of EV Battery
Tesla Tesla Buyer Nets a Whopping $12,000 Discount After Asking for Reduction
END_OF_DOCUMENT_TOKEN_TO_BE_REPLACED