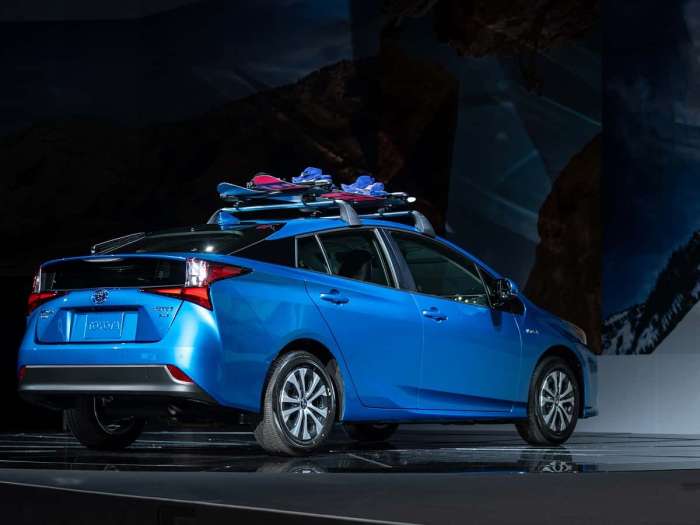 2019 Toyota Prius Will Go Where No Prius Has Gone Before

A new rumored all-wheel drive version of the 2019 Toyota Prius has been confirmed. Here is what Torque News knows so far.
Advertisement

When you are the best-selling hybrid of all time, what do you have left to prove? And when you have done everything you can do with a hybrid, including plug-ins, what more is there to build on? For the Toyota Prius, there is plenty.

Toyota just announced its 2019 Prius will be available in an all-wheel drive version, known as AWD-e. It will be an on-demand system, delivering appropriate power to the rear wheels when it’s needed most.

AWD-e will still utilize the combination of the traditional Prius 1.8-liter 4-cylinder engine and two electric motors/generators and its CVT continuously variable transmission. To get optimal all-wheel drive performance, it uses an independent rear motor at starting speeds to power the rear wheels from 0 mph to 6 mph. It’s also used as needed up to 43 mph. Nothing like having peace of mind when you’re trying to tackle tough weather conditions like snow, ice and heavy rain.

The next logical thing to wonder is how will gas mileage be affected? After all, killer mpg is the name of the game when you’re considering the Prius. Rest assured, the new 2019 Toyota Prius AWD-e will proudly proclaim their mpg estimates as 52 mpg city / 48 mpg highway – 50 mpg combined. The traditional 2019 Prius FWD will carry on its great gas efficiency of 54 mpg city / 50 mpg highway / 52 mpg combined. Additionally, one new trim level will offer 58 mpg city / 53 mpg highway / 56 combined.

For me the second-best news is the new trim level strategy unveiled for the 2019 Prius. One of the most frustrating things for Prius shoppers is trying to understand the numbering system of the Prius, and how the Prius ONE, TWO, TWO ECO, THREE, etc. matches up with the traditional Toyota L, LE and Limited sedan lineups they are familiar with.
Get ready for simplicity ladies and gentlemen. 2019 Toyota Prius grades will be L Eco (similar to the 2018 Prius TWO ECO), LE, XLE and Limited. AWD-e will be available in LE and XLE. You’ll also see the appearance of two new color choices: Supersonic Red (2019 Camry SE and XSE approve!) and Electric Storm Blue.

So the new 2019 Toyota Prius will have all-wheel drive, refreshed exterior styling, new trim levels and colors, and more features than ever before. With this new flurry of information, we can all get a little excited and have something to look forward to in early 2019.

As one loyal Prius customer of mine surmised, “That’s impressive! Now we can finally use a Prius for trips to the mountains!” I suppose we should get ready to take our Prius to places we’ve never been before.

What do you think of the idea of an all-wheel drive Prius? Where will you take it first?