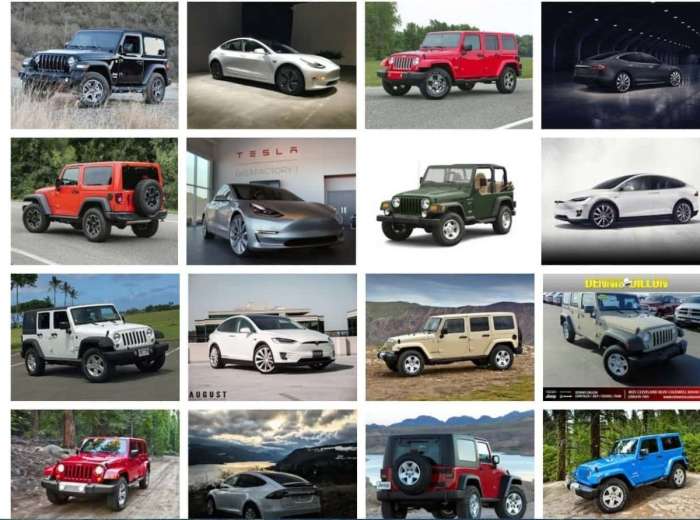 Jeep and Tesla Have 2 Things in Common: The Fun Factor and Community

While Tesla owners don't have the Jeep Wave, Tesla and Jeep still have two very important things in common. They both have great communities and the fun factor.
Advertisement

Growing up, I remember always admiring the teenagers who owned Jeep Wranglers. During my Junior year of high school, I made friends with a couple of Seniors – one of whom owned a Jeep. That was our ticket to get off the school campus during lunch hour and venture to fast food places nearby like Dairy Queen, to the envy of others trapped in the school cafeteria. Those adventures may not have taken us off the paved roads, but the Wrangler with its top removed gave us a sense of freedom that went far beyond just riding in a regular passenger car.

As an adult with a family, I finally decided to buy a Wrangler of my own. I wasn’t sure how my wife would feel about the purchase. But the fact we live on a steep hill in a small town partially justified it as a way to get out if we got snow and ice, and the streets weren’t cleared yet. Her only response was that I had to buy an “Unlimited” 4 door version, so it was practical for hauling the whole family or cargo around. After looking at a number of dealer web sites to see what was in stock and at what price, I made my mind up to go with a Rubicon Unlimited edition with as many options on it as I could get. It became clear to me that Wranglers held their resale value better than most vehicles and had relatively low insurance rates, so I figured it was a good vehicle to splurge on with the bells and whistles.

Welcome To Jeep Owners Community and the Jeep Wave

Shortly after buying the Jeep, an interesting thing happened. I realized I was suddenly welcomed into a whole new community of fellow Jeep owners, and the heritage ran very deep.

The Jeep meant a lot to many military veterans and I was asked to participate in the annual Veteran’s Day parade they hold in town. Jeep owners are well known for the “Jeep wave” too, a gesture that has its roots in WWII. Soldiers picked to drive higher ranking military officials around in military Jeeps weren’t allowed to salute each other but wanted a low key gesture to recognize each other as they passed in transit. So the tradition began of giving a brief wave of acknowledgement.

Today, the Jeep Wave is still a nice gesture that helps unify the Jeep owning community. By adding a winch to the front of the Jeep, one also became recognized in town as a good person to call on for assistance. (One guy managed to get a riding lawn tractor stuck in a lake after it slipped down an embankment. A call went out over Facebook, asking area Jeep owners if any of us could assist. Within about 30 minutes, one of them was out there, helping recover the tractor.)

Later, I learned that quite a few “first responders” owned Wranglers, partially because they enjoyed that ability to get to a scene, even if roads were flooded or an injury occurred off-road. One of the area Jeep clubs volunteers to give doctors and nurses rides to the hospital any time the weather makes it too difficult for them to get there in their own vehicles. But it’s also about the fun of owning a vehicle that’s so versatile. (I once described my Wrangler to a friend as a LEGO set for adults.)

How many other cars or trucks let you take the doors off with an included tool, or fold down the front windshield if you desire? You have many options for the top as well. Obviously, you have the hard top or canvas soft top Jeep sells with them, but you can remove them completely, or substitute them with sun shade tops that give the Jeep an African safari look. Other vendors sell alternative soft tops or even hybrid soft/hard top combinations. And all of that’s before all the customizations people do. Even if all you do is add vinyl decals, the sky’s the limit for making your Jeep your own.

Another indication of this fun nature of the Jeep brand are the hidden “easter eggs” on Jeep products. According to the Autobytel web site, in an interview with Head of Jeep Brand Design, Mark Allen, these are designed to remind customers that hands, not computers crafted their Jeeps. Additionally, it demonstrates that Jeep’s own design team simply likes cars. For example, the Jeep Renegade’s rubber dead pedal on the floor has a pattern printed on it that’s actually morse code for, “sand, snow, rivers, rocks”. 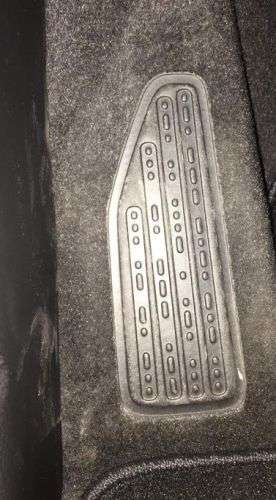 Or on the 2017 Jeep Compass, a lizard was molded into the plastic cowl at the base of the front windshield, below the wiper. 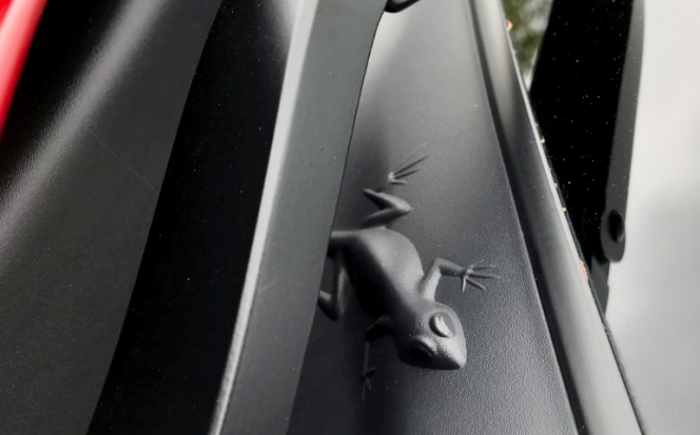 After the family attended the “Jeep Week” event in Ocean City, Maryland a couple years ago, my wife decided to trade in her Kia Soul for a second Wrangler. She even went with her favorite color, purple. (That’s yet another indicator of the fun factor of a Jeep. They’re sold in many assorted, often bold color choices.)

Fast-forwarding to the present? I got the opportunity to make the leap to a used Tesla Model S P85D, which required the difficult choice of trading in my Jeep towards it. I guess I figured we didn’t really need two Wranglers though and some of my upgraded parts were able to be swapped onto the wife’s Jeep too. I have a much longer commute than her and the gas usage of the Wrangler was starting to become a significant expense, but the Tesla was also on my bucket list of cool cars I wanted to get a chance to own at some point.

The Community and The Fun Factor at Tesla

I’m happy to report one thing though; the same sense of community and the same fun factor exists with the Tesla! Easter eggs? Yep – Tesla has them too. Numerous message forums and clubs for owners? Check! And while a Tesla S isn’t designed for off-road use like a Jeep is, it’s surprisingly capable for being a sedan. With the all-wheel drive option, it’s able to go through your typical snow covered or icy road better than many vehicles.

Customization options of Tesla Model S aren’t nearly as plentiful as for a Jeep Wrangler, but there are quite a few aftermarket modifications out there, both big and small. Creative folks have even modified the air suspension on a Tesla Model S so the car has the “slammed” look with very little wheel gap. Personally, I’ve just settled for small touches like puddle lights in the bottoms of the doors that project a red Tesla logo onto the ground as you get out or in the vehicle.

In a nutshell? I’m not at all surprised that both a Jeep and a Tesla make the list of the vehicles people most desire or dream of owning. The experiences both exceed what can be expressed in a Consumer Reports type car review.

By the way, is there Tesla Wave?

Brandon wrote on May 28, 2019 - 2:12pm Permalink
I wave at every other Tesla I see. ~50% or so wave back. Model 3 owners seem more likely to wave than Model S or Model X. YMMV
Phil wrote on May 30, 2019 - 7:24am Permalink
I don't own a Tesla (yet) because we live in a rural area with absolutely no recharging facilities available and for us, a battery powered vehicle just isn't a practical option. Boyh my wife and I have both been Jeep owners for years and we're quite familiar with the "Jeep Thing". We drive a lot of miles in the Jeeps and my current Commander (my second one) has logged 350,000 miles and is still going strong. The Commanders are the best multipurpose vehicles I've owned, and in the past 60 years I've owned a good many different vehicles. They can carry 7 people, pull trailers up to 7,500 pounds, offer adequate comfort for large guy and are versitile on long trips and well as off road. As for the Jeep community, I find it's not what it once was. A great many soccer moms and first time Jeep owners have no clue. For them, a Jeep is just another car and they don't understand why you wave as you pass on the road. Your article didn't mention the one vehicle with the strongest world wide owner community -Harley-Davidson. I've been riding Harleys for almost 60 years and no other product, motor vehicle or otherwise, has a loyal following like Harley-Davidson. The "Harley Wave" has evolved into a nearly universal salute within the biker community, even among folks riding other brands. And a final comment about product loyalty and communal association. Look at the people who have Harley tattoos. No other product is so revered by it's owners that they permanently display the brand on their bodies.
Marvel Pinnock wrote on December 8, 2019 - 6:44am Permalink
I like jeep and even though I don't own one I'm always interested in jeep technology most of books that I have right now is about jeeps i also developed a great interest in electric vehicles technology Tesla have the most powerful electric motor in there vehicles for me I would do combination style by adding Tesla electric motor to a jeep to see how well it would perform that my view.