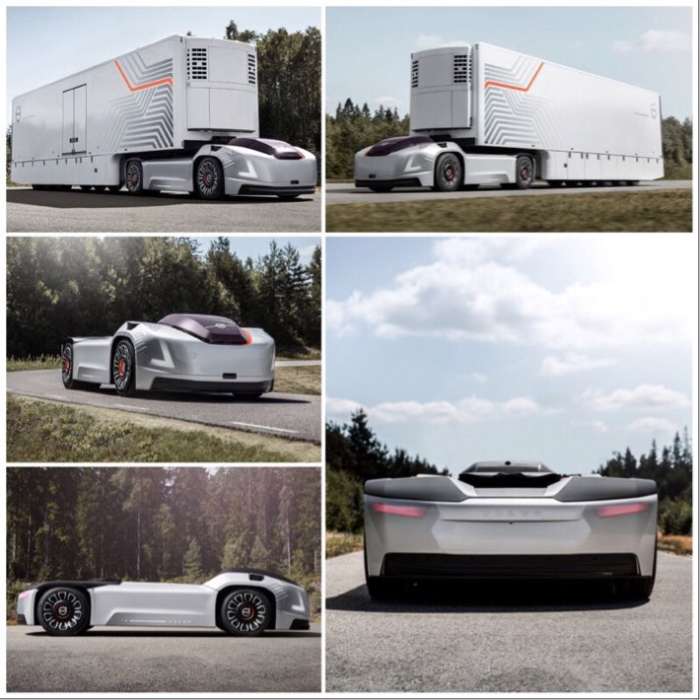 Volvo Gives Us a Glimpse of a Bladerunner World of Electric Tractor Pods: Trucks So Driverless, They Don’t Even Need Cabs

Meet Vera. She’s Swedish, and she means it, damn it. She’s a badass Level 5 Volvo robot electric tractor pod almost as low to the ground as a Porsche, only three times bigger. So low, if you’re not careful, she might mow you down before her collision avoidance and passive emergency braking systems are autonomously activated! Potential roadkill beware! No airbags need apply . . .
Advertisement

There’s even an ex-Ford seller in your future: the Bladerunning Volvo! Our short series on the crisis ridden Ford Motor Company, continues with the theme electric life after Ford. In this story, we address the companies that sold parts of themselves to the blue oval, in this case Volvo Group AB, the truck people, who sold their car operation to Ford in 1999, only to have Ford run away from them, selling Volvo Cars to Geely. This would make Volvo Trucks the ex-Ford sellers in your future! They too, the Volvo Truck people went on after the Ford sale to do better without Ford, that they’ve prepared a Bladerunner world for us with their get-out-of-my-way-I-mean-business-damn-it tractor pods:

Volvo Group AB, that’s the truck people, not the car ones, offer what some might consider a scary peak into the future of a Bladerunner world where electric tractor pods roam the roads around the globe. In this rendering concept, Volvo trucks is trying to gauge public reaction to tractor pods as driverless trucks so driverless, they don’t even need cabs for drivers.

In reality, while at first intuition would make this equipment seen as job killers, at closer glance and more careful thought they’re probably more closer to job enhancers for those mundane trucking duties like moving trailers around a warehouse or depot, or those pain in the neck short term routes nobody wants to do. And they can save trucking companies tons of money on gas, and the companies who use them for supplies and inventories, tons of money from overstocking. Let’s hear it for driverless trucks!

Yes, as driverless trucks this concept for now, is far fetched and perhaps far reaching, but companies like Volvo Trucks do these things to brace us for impact and soften the blow as they have their engineering teams work out the particulars of the emerging technology, and design studios who listen to the engineers on what to draw. This concept is the result. We laugh, ooo, and ahhh about it now, but the irony is I wouldn’t be surprised if I’m still alive that the damn thing looks somewhat exactly like this in the actual future.

Yes I know. There is a kind of creep element to these pods. Instead of hauling trailers they look like something designed to mow you down for illegally crossing the highway. But think about it: if YOU had to design a tractor pod in the most efficient way without offending humanity, how else would you design it?

Should we say this Volvo is the ex-Ford seller in your future?

Tell us what you think of Vera!