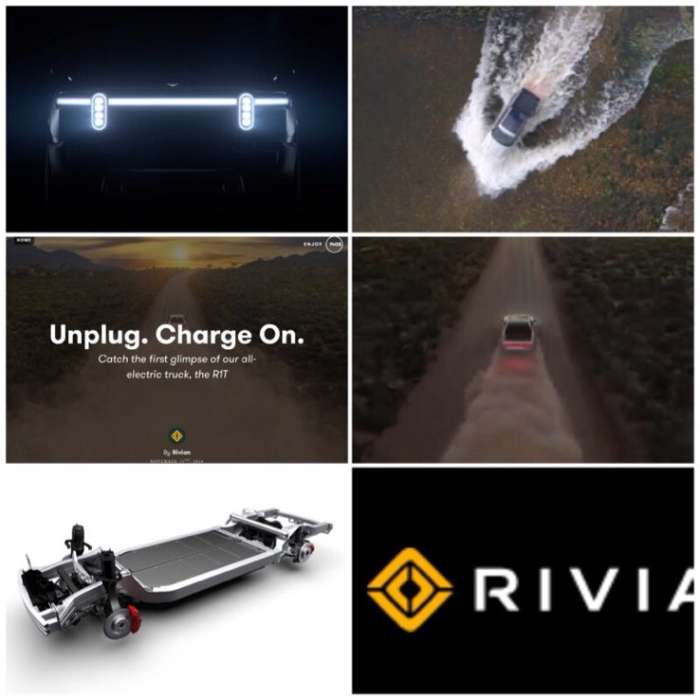 We’re now about a few days away from the launch of Rivian’s new mystery trucks, and instead of debunking myths, conjecture, theories, legends, and rumors, Rivian, purveyor of “electric adventure vehicles” only heightens them and with mystique. This time Rivian publishes a second teaser video showing their truck wading through 3 feet of water with 3 seconds of footage.
Advertisement

EDIT NOTE: 11/24/18 1635 PST: I corrected the model names of Rivian’s Pickup truck, the R1T, and the SUV, the R1S. I also updated the illustration to reflect Rivian’s new corporate logo. My thanks to Michael McHale,Communicatons Director at Rivian Automotive. Please pardon the snafu.

BREAKING NEWS: 11/20/18 6:45 P.M. PST: I was just about to file this story about last week’s Rivian Automotive teaser, when I just went on YouTube to peel off that video and found this just published by Rivian with only 50 views so far, this time a 15 second clip where the one of the two vehicles is revealed:

STAY TUNED: I’ll be at the Auto Show for more details on Rivian’s new Vehicles. Now back to the feature story:

Rivian Automotive, the ten year old electric vehicle startup I wrote about a few weeks ago, is now getting close to their vehicle debut launch of their full electric pickup and SUV at the LA Auto Show. If you type into Google “Rivian Automotive” and check images, you’ll see not one thing, not one picture that’s legit, about anything Rivian and a truck or SUV. I called them the clandestine “electric adventure vehicle” maker, because for the past ten years they have been so secretive in trying to carefully find the right vehicle at the right time to ramp up for production. If you remember me telling you, Rivian has been spending all this time carefully searching for the right prototype so that they can put that technology into that vehicle. Time seems to be running out I’m sure they know, as other startups like Lucid are getting ready to ramp up if not already, and with the legacies like VW and GM ready to saturate the market before Tesla corners it, its going to be harder to introduce anything not off the beaten path:

Rivian describes their pickup and SUV as “electric adventure vehicles.” From their press release:

“The two all-new electric drive models promise impressive on- and off-road performance figures and class-leading specifications including range, power, torque and off-road articulation. These vehicles are set to demonstrate that electric vehicle technology is now able to deliver durable, long-range on- and off-road capability to consumers.”

It is the do or die of being a startup of electric vehicles: trying to find the right kind of vehicle for the right time, and most importantly, for the right kind of money you can get to ramp it up once you decide what its going to be. Ask Tesla. Tesla is the only electric car start up so far that has made it past ramp up to production to still be alive. This is also why Tesla is the darling of the stock market even though they’re soaked in debt, as for a long time their valuation is more than GM’s is, to GM’s jealousy and amazement, that Tesla despite all its problems just seems to be at the right place and the right time to still be here since 2003 when they started, and 2008 when they started building Model S, their first full mass production vehicle.

So when I got the email from being on their list about the debut clip, I had to slow it down many times to get it scrubbing speed. And then once there slowed it down to get a screen shot. I see other news agencies have done it too, but that’s what you see in the illustrations above. If you haven’t caught it yet, here‘s their video from their website:

I’ll be at the Auto Show on November 29, 2018 for Torque News and doing live casts on social media to give you the scoop on Rivian and other vehicles noteworthy that you’ll want to know.

What do you think of Rivian’s electric adventure vehicles? Let us know below!

DeanMcManis wrote on November 21, 2018 - 7:19pm Permalink
I hope that it is as impressive as it's specs promise. One critical bit of info missing is the price. Ultimately, price and availability will determine if this is a rich man's toy, or if it is the crucial linchpin that forces Ford, Chevy and Dodge to get off the sidelines and build a BEV truck to compete.
Al Castro wrote on November 28, 2018 - 3:23am Permalink
Pickup MSRP $69,000 and up. This is a luxury brand just by pricing.
DeanMcManis wrote on November 28, 2018 - 9:52am Permalink
I am actually pleased to hear their pricing. They are clearly targeting Tesla, but it's not too far above an optioned conventional truck that it is out of consideration. The premium packages on full sized trucks and SUVs are often north of $60K, and SUVs like the Escalade and Navigator are nipping past $100K. And none of them offer the proposed performance of the top R1T/R1S. I am curious how the Rivian models perform off road, but it is clear that was a prime consideration in the truck's design, and the massive, on-demand torque would certainly be a big benefit for rock climbing. It is exciting to see this announcement, but it is going to be a long year or so to wait for production models to arrive.