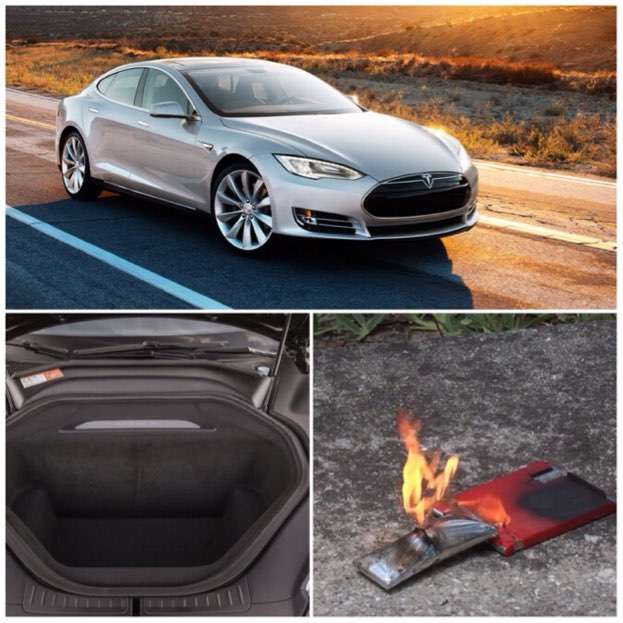 Firearms Onboard a Tesla Should be Holstered or in a Locked Case, Not Discharged through a Battery Pack

ANALYSIS AND OPINION: Attention military, law enforcement, security, and/or hunters who validly possess a firearm, or anyone else with the gall to carry a firearm illegally: the chances of your battery electric vehicle catching fire from a purposeful or accidental firearms discharge through the battery pack are much greater than if pierced through a gas tank. Read this story now coming to light about a 2014 Tesla S to find out why.
Advertisement

An old incident that Tesla Corporation kept quiet for years as part of an initial settlement that eventually was rescinded as it unraveled, is just coming to light after the freedom of information revealed through court records showed what a firearm discharge could do to a battery pack of any kind of battery electric vehicle, including a PHEV. This incident clearly shows now more than ever when driving or riding in an electric vehicle, that if you choose to carry a firearm onboard to ensure that the weapon is holstered or in a case, preferably locked, and in a storage container of the car like the frunk or a storage compartment where it can be better protected in case of a crash or fire:

Before I get into a synopsis of John Schneider v. Tesla in the Pennsylvania Court of Commons, let me explain what happens when a battery pack explodes or catches fire. It’s all about keeping out any kind of water, any kind no matter how minuscule. This is why whether it is an iPhone, a Norelco razor, or a Tesla vehicle, the batteries are packed and stored the way they are. There are hundreds of millions of lithium ion batteries out there, in use or stored in a draw like I have a few old ones from a Treo phone come to think of it, and with that, that there isn’t more incidents of battery burnings or explosions is testament into the technology used to pack and store them.

The Galaxy Note 7 debacle, for example, could have been much worse than it was if it weren’t for how the packs were designed to minimize danger. This is also why I am a big advocate of BEVs having longer ranges and another reason why we need to get rid of these damn pesky PHEVs: shorter recharge cycles with smaller packs increase the chances of a hotter battery pack, which creates a bigger chance of a fire or explosion! These tinier batteries don’t last as long as their larger BEV equivalents do, anyway. This is also why if you have a tiny battery pack in your car, like a Nissan Leaf, rapid charging repeatedly and consecutively is not an option!!

Here’s what happens in a visual when a pack gets too hot:

So what happens in describing when your pack gets hot? Maximilian Fichtner explained in a Deutsche Welle interview. Fichtner is the director of the Helmholtz Institute for Electrochmical Energy Storage in Ulm, Germany: "The electrolyte liquid can dissolve, generating additional heat that aggravates the process," the chemist explains. “The gasses then inflate the battery casing," Fichtner describes the scenario shortly before ignition. "When the plastic case cracks and air gets into the battery, the situation gets worse - because lithium can ignite in contact with humid air."

With the melting of the metal oxide, oxygen is released, and you can figure what happens when burning lithium and oxygen, and when coming into contact with water molecules, combined at 2000° Celcius, does as a danger. No fire extinguisher works with a lithium ion burning. Ideally it is best to cover with sand or clothing and let the fire smother itself out! This is why it’s a good idea for a work environment to have a big bucket of sand available in case of such emergencies!

Now this is for an overheated battery. Imagine just accelerating the process just by knifing or shooting a firearm into a battery pack! And mind you, for those not familiar with firearms, there is no “spark” from a bullet that accelerates a gas tank explosion from a firearms discharge, that’s Hollywood. Rarely if ever does a bullet act as an accelerant for a gas tank to explode when you shoot a firearm into one! However, with a bullet fired into a battery pack it can! But again, not like a flammable accelerant! In the case of a battery pack explosion from a firearm, that’s simply caused by the mere puncture of the pack by the bullet as you would no differently than with a knife.

This case is now coming to light because for a time period, the initial settlement required the Schneider party to remain quiet as part of the settlement. This was all going on while Tesla was having a moment in the media where their products were at the focus of controversy just being barely two years on the road with their first full production Model S, and a succession of crashes or explosions or burnings were under an intense microscopic eye.

On Wednesday December 31, 2014, John Schneider of Pittsburgh Pennsylvania picked up his brand new Tesla Model S from the retailer to take it home. Scott Burns, the Tesla Regional Service Manager, apparently was monitoring Mr. Schneider’s car as he was taking it from delivery to already see on his computer screen that the car was already emitting faults to Teslaworld. While Schneider’s car was engulfed in flames on the side of a Pennsylvania road, Burns had sent out an email expressing his concern about what he was reading, and for Schneider to call him. Too late.

Schneider says the flames started backseat, and you can even see flames on the exterior as he quickly got out to see his brand new car go up like a matchstick. Now understand to give this context, with their new car not tested and tried true, yet, Tesla was undergoing some soul searching at that moment when less than a half dozen other cases were still brewing in the public and very embarrassingly for Tesla. So Tesla being a luxury brand it is, stepped to the plate to give Schneider endowments: a loaner car until a new complementary one was built and prepared, paid off his car loan, and an extended warranty on the new replacement. Who could beat that? Would GM do the same? How about Mercedes? Rolls Royce?

But here’s the plot twister, and a warning to all of you out there who aren’t thinking when something happens when involving your Tesla, and you. You have to careful what you say, and what you do. You know that sooner or later, between Tesla and the National Transportation Safety Board (NTSB) when they send a crash team if they do, that they are going to check all the facts. In the case of Tesla, they are going to download all the information they can from your car before it goes to car nirvana heaven one way or another, and they’ll cross check even that information.

Well, that’s what exactly happened, in fact, they took in the wreckage and went through it with a fine tooth comb to find out what really happened. It seems that a firearm was discharged into the back seat and it seems the firearm discharged inside the car, not outside, and in fact, they even found the bullet, as it was stick on the inside of the battery pack. Very damning.

Well, needless to say, because Tesla found out what really happened, they revoked the agreement with Schneider which also required him to keep his mouth shut about the deal, that’s when Tesla wanted their car back, it became a little more complicated, because since Tesla already paid the bank off with the first car, Schneider was going to get the short end of the stick with no car. Bottom line it got messy. And because it went to court at this late point, we’re finding out all the details about it now.

Moral of the Story

Soccer Dads and Moms: make sure there are no sharp objects kids or pets can get hold of to go crazy on your backseat and get down to that battery pack in just a few minutes while you run into that Seven Eleven!

Hunters: to ensure you still have a kill to eat after your Tesla burns, better to rack it on the camper, not on the car!

Cops, military, and security: you too eventually will be driving a BEV whether you like it or not, so get used to this and heed my advice.

But also remember this: regardless of all this hype about a bullet into a Tesla battery pack, the more likely way you’ll ever still see a car fire is with a gasoline powered engine, and NOT a battery powered one!

What do you think of the incendiary Tesla battery pack? Let us know below!

Robert wrote on December 17, 2018 - 7:01pm Permalink
I'm not sure I get it though... why did he shoot his car?
Al Castro wrote on January 3, 2019 - 10:27pm Permalink
Never given a direct answer. That’s apparently part of the secrecy of the initial deal that fell apart. Who would purposely shoot a bullet into his own $85,000 car brand new right from retailer delivery probably after being waitlisted so long? It had to be an accidental discharge!
Brian Murphy wrote on January 29, 2019 - 10:42am Permalink
A well placed shot from a criminal will send an BEV up in flames. Shooting a gas tank normally just makes it leak.
Al Castro wrote on January 30, 2019 - 1:21am Permalink
Correct. But this shouldn’t be a reason not to use BEVs for police duty. This is about double checking your prisoner and tossing the radio car BEFORE securing your perp for transport. To the manufacturers this means putting a steel plate not only under the tray but over it as well. As volatile as batteries can be, doing this not only protects against battery fire, it makes the vehicle more sturdy in a high speed accident, helps keep a low center of gravity in high speed pursuits, enhances the features of hardening the vehicle against attack like a road bomb, and thus makes it an excellent ballistically hardened security vehicle to transport high risk principals. I believe when properly equipped an electric car makes an excellent police and security vehicle and preferable to a gas vehicle. But whether they like them or not the cops and security people need to get used to this idea because gas cars will be gone sooner than we think and the dawn of the Electric Age has already begun.