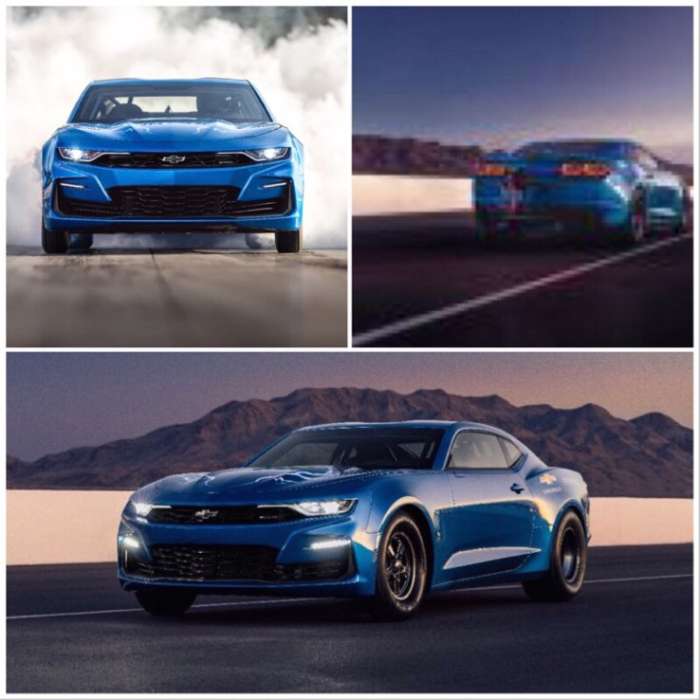 The 2019 eCOPO BEV Camaro Race Car Concept: the Pony All Electric Both GM and Ford Should’ve Been Making by Now

In my frustrating effort to keep pushing the movement toward full electric cars, I often get frustrated by the lack of enthusiasm and missed steps the legacy car makers have taken. If they really were enthused and eager to adapt to electric cars, they would have an all electric option for both their halo sports and pony cars. They don’t. Still. With lackluster Camaro sales, Chevy needs a “comeback kid” car. The eCOPO Camaro is it.
Advertisement

I tell the legacy auto makers: do you want real hardcore fan base enthusiasm for electric cars? Never the mind the stigma electric is for wimps. You want to turn on your base onto the speed, power, and performance of a fast Ford GT or Mustang, or a Chevy Corvette or Camaro, that laughs at a Ferrari and Lamborghini, McLaren and Bugatti too, at the green light of a drag strip? Never mind these billion dollar skateboard battery tray platforms for your future electric cars. Electrify what you already have, and they will buy! If it has the horsepower and torque a proper performance car should, they will buy, THEY WILL BUY:

The Most Important Spec:

Thanks to electric drag race champ Patrick McCue, Hancock and Lane had a dozen high school kids help them with collaboration. If this car were in production, this would be a selling point for me, plus I’d add a little donation to the school as a thank you. Thanks to Seattle-area Bothell High School automotive technology program, I can think of no better reason to buy this car-I now have a nephew (niece) somewhere that this is his/her car.

ANALYSIS AND OPINION: For the life of me I can never understand why by now both Chevrolet and Ford do not have a high performance electric variant for both of their halo cars, the Corvette and GT, respectively, and their performance pony cars, Camaro and Mustang, respectively. If they were really interested in selling electric cars, even today with GM’s all electric plans for the future, they are still not, at least they should have by now recognized how electric power moving forward will always beat internal combustion as far as efficiency, horsepower, and torque. You can build the fastest most powerful gasoline engine you can create or find, there will always be some kind of electric build that will in someway beat it and won’t waste gas in the process!

If they were really interested in jumping into the all electric car market, they would stop their silly nonsense of needing a billion dollar skateboard battery tray chassis to make their electric cars, and get really serious with what they already have, to put whatever that is, into production, and save money in the process. Like the PHEV is supposed to be, these cars would be transition cars, until the properly chassis, researched, and tested all purposed electric performance car finally was ready for production. If had money to burn to buy a super fast sports car with a half dozen power plant options, the top two or top being electric, guess which one I’m picking!

Waiting for the Electric SEL 6.3 Moment

And this is the quandary I guess it’s called, that the legacy makers are in, that they themselves put them there, no one else, that for whatever reason they can’t seem to get themselves out of, and they choose not to produce a BEV variant from the present portfolio. And please, I don’t want to hear anything like, “well a BEV version on a current production car is not the place to be putting batteries and an electric motor” Bull****. Ask Aston Martin about this and their Rapide e-Saloon. In GM’s case, is Mary Barra paying any kind of attention, because if she’s not someone please tell her to wake up and pay attention! Unfortunately I’m afraid it probably will take the need of a Tesla Roadster 2 for them to have a Cher “Moonstruck” Moment to slap themselves in the face and “SNAP OUT OF IT,” to wake up and smell the electric coffee.

Ask Daimler Benz of yore about this same quandary, that before the SEL 6.3 days they couldn’t figure for the life of them why Americans weren’t taking a liking to their bigger cars with paltry 6 and yes 4, four cylinder engines, I have to laugh. This almost reminds me of these paltry electric ranges of these PHEVs that some people are actually happy with! If these people only knew that there’s an electric life out there of having a 300 mile range just like a gas tank, waiting for them! And it doesn’t have to be an Einstein equation Sherlock Daimler, to figure out: if Oldsmobile, Lincoln Mercury, Pontiac, even Chrysler and Chevrolet were putting big block eights in their luxo boats, maybe putting a V8 in yours might shake things up a bit.

Grabbing the power plant from the W100 600 Pullman in 1966, the SEL 6.3 then the W116 6.9 was born. That’s how Mercedes Benz became a luxury PERFORMANCE brand. Ford and Chevy need to have a 6.3 moment for electrics. It hasn’t happen yet. Don’t worry, Tesla will help them along with that too. In Ford’s case, they see electric as soccer mom, not Ford GT, with a Mustang Mach-1 variant CUV. Sigh. Frustrating. And note this, Ford has not one, not one full production regular all electric vehicle on the market yet, not one. No compliance cars please, and no excuses. What does that say?

In a Parallel Universe: The Chevy eCOPO Camaro Approved for Production:

Somebody over at the General is getting wiser. Mary, you should be promoting that person(s) whoever he/she/they is/are.

In the perfect world, this is my almost exact vision of what the first all electric Mustang or Camaro would be. We don’t need no stinking battery tray platform. We’d start with the current platform. I would want even more horsepower than Chevy gave theirs, because I’d want this car to blow the pants off of any fat or skinny or in between Hellcat Demon Monster whatever MOPAR, but a Borg Warner 300 horsepower 400 volt motor is a good place to start. This is the same kind of motor Daimler is supplanting into their electric lorries for the power of torque. I’ll take two please. If this is enough horsepower for commercial use, it’s gotta be good for fast cars.

No battery tray is needed. Break up the pack and put the modules under the rear seat, rear axle, even the spare wheel well, what? Whatever happened to run-flats? Who needs a rear spare tire well? The Camaro has a fat ass, but no junk in the trunk. That’s all about her solid rear axle and gas tank, so she definitely doesn’t need to spare space now. Amen. Now isolate the rear batteries for safety in case the car gets into an accident, including a cage around that same fat ass area Camaro is now famous for. Step up battery management with the same kind you give Bolt, Volt, and ELR, even something better. Thank you. That’ll do. For now. See how easy? Jeez.

Thanks to Hancock and Lane, they helped Chevrolet grow a pair, at least two little ones, to get them to start thinking about the bigger picture of performance and electric together. Sigh. It’s a process:

“Eight hundred volts is more than twice the voltage of the battery packs in the production Chevrolet Volt and Bolt EV, so the eCOPO pushes into new technological territory,” says Russ O’Blenes, director, Performance Variants, Parts and Motorsports at General Motors. “As GM advances its electrification leadership, a big step might just come from the drag strip.” Might just come from the drag strip? Might just? If GM knew better and was smart for itself, it should’ve realized the drag strip should’ve been the first place that they looked! I bet you one thing: had this been Daimler, and I’m talking about the old West German Daimler of the SEL 6.3 Era, not the present one, this is where they would’ve been looking at first too . . .

Is there anyone at the Renaissance Center that finally gets it? Maybe. I hope so. Nah. Not yet.

What do you think of the eCOPO Camaro? Let us know below!

DeanMcManis wrote on November 6, 2018 - 1:30am Permalink
Yes, it's exciting, and overdue. One rumor is that Chevy could offer this electric package as a crate engine for purchase!
jeff lane wrote on November 6, 2018 - 3:02pm Permalink
This was an exciting accomplishment thanks to GM and it was compacted into a 4 month build with GM building from scratch the new dual stack motor. I look forward to upcoming test sessions and racing this car in NHRA drag racing.
Al Castro wrote on November 8, 2018 - 11:02pm Permalink
Although I didn’t write it I’m proud GM stepped up and it frankly doesn’t surprise me. If we can only get places like Ford and FCA to do the same. If my job was at stake, I’d too be apprehensive, but we’re getting way past that in this EV market. Time is now for action, and eCOPO Camaro is the result. Good luck and enjoy the testing and please let us know how it goes.
Jeff Lane wrote on November 23, 2018 - 12:25am Permalink
Will keep you updated. GM stuck their toe out there and gave us a shot at doing the build with them. It came out amazing and they are very positive with what EV can accomplish. We need to get past our end of the year contract with this build and then we will see what is in store next.

LG's New EV Battery Plant Is a Welcome News for Tesla
Tesla Giga Berlin's New Hurdle: It's Not Only the Gov't, but Now Tesla Itself
END_OF_DOCUMENT_TOKEN_TO_BE_REPLACED