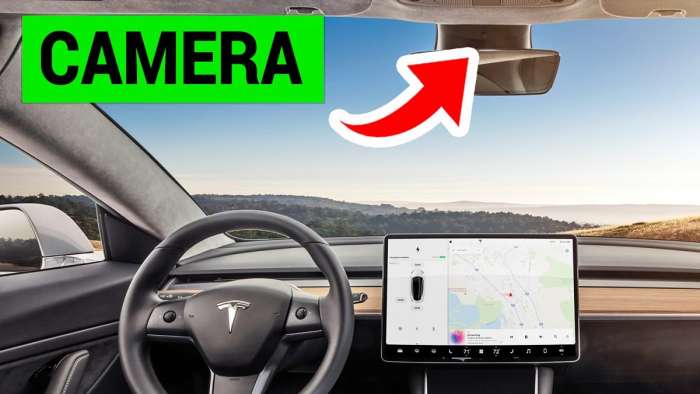 Ever since the launch of the Tesla Model 3, we have been aware of the subtle cabin-facing camera located in the rearview mirror. The camera comes as standard equipment, but so far it remains dormant. So what is the latest news regarding the Tesla Model 3 internal camera? AJ McGinnis reports for Torque News.
Advertisement

Earlier today Torque News learned on a patent application recently submitted by Tesla. The patent titled "Personalization System and Method for a Vehicle based on Spatial Locations of Occupants’ Body Portions" comes with the following description:

Basically, they are planning on programming the camera to recognize passengers and save personalized settings for each one so that they can be automatically applied.

What settings could be impacted? Adjustable components such as the driver seat, vehicle mirrors, and front mirror may be automatically adjusted. Radio and music preferences, as well as driving mode preferences, may be altered according to the "user preferences in the driver profile of the first occupant". Then there is the fact that the camera may also be used as a selfie camera, "an image sensor, a wide-angle camera, an action camera, a closed-circuit television (CCTV) camera, a camcorder, a time-of-flight camera (ToF camera), a night-vision camera, and/or other such in-vehicle cameras or sensors."

This could be particularly helpful once Tesla's robotaxi fleet gets off of the ground since those personalized settings could be applied no matter what car you step into.

Other Benefits of Having an Internal Camera in Model 3

Having a camera monitoring you while you are in the car may seem creepy at first, but it does come with its benefits. The car could recognize that you are falling asleep at the wheel and then pull over to safety. If the car realizes that a passenger is having a health emergency, it could be pulled over and emergency services may be contacted automatically.

Then there is simple vehicle security. For instance, the other active cameras on Tesla vehicles have already captured vandals and aggressors in the act and led to prosecution. If the car is being used as a robotaxi, having active interior cameras means that passengers can be held responsible for damages or crimes that are committed inside of the vehicle.

DeanMcManis wrote on July 25, 2019 - 11:55pm Permalink
Another point for an internal camera is face/eye tracking. I worked on a project many years ago for Toyota/Lexus that used IR cameras to identify and track bicyclists and pedestrians at night for accident avoidance. But they also had an internal camera for what they called inattentive driver. It tracked your face and eyes to first make sure that you were awake, and then that you were watching the road. It had a series of flashes and louder beeps that progressively alerted you if you fell asleep or were distracted for an extended time. In addition to those safety features, the internal camera in the Tesla could confirm that you are indeed watching the road when Autopilot is enabled. I was surprised to hear that this feature was not already enabled in Tesla cars. For the Cadillac auto driving system a camera and lights in the steering wheel constantly monitor your face to confirm that you are watching the road, or it will automatically disable the auto driving control. Unfortunately these are measures required today as the auto driving systems improve, and to prevent lawsuits for those drivers that ignore the stipulations of using the system, and get into an accident.