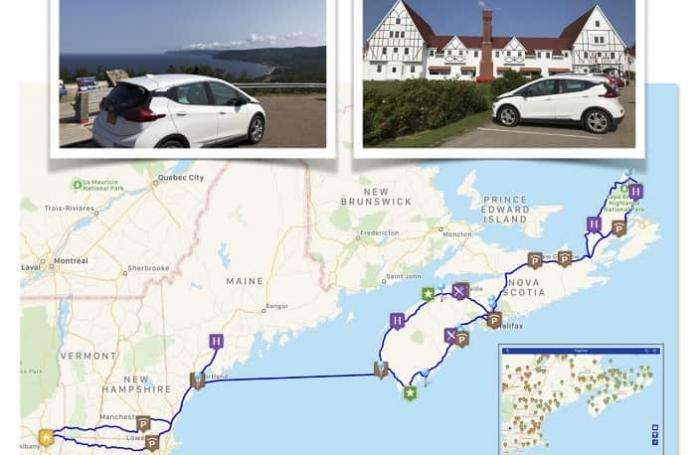 So how far can you go before you have to stop? How long does it take to charge? You can’t go anywhere too far right? If you you have spoken with anyone about your EV, you have probably heard these questions over and over again. All trying to point out the impracticality of EVs. Well, I can tell you that, yes, while these deserve consideration, there’s nothing impractical about the Chevy Bolt.
Advertisement

Before leasing our new Chevy Bolt, we had a small SUV. This summer, we wanted to visit Nova Scotia. Cape Breton to be exact (the mountains, the music, the ocean, whale watching, the lighthouses... so many lighthouses... ). We live in the Capital Region of New York (“upstate”) and that’s a long way no matter which way you go. Initially, we thought we might take the SUV but because it was having issues we thought why don’t we turn this into an EV trip. So we traded it in for the Bolt because it was available and would have enough range (~240 miles or 400 km at 100% charge). We picked it up the night before we left (a crazy story that I’ll save for another time).

We considered a few ways of getting there — driving the whole way through New Brunswick (longest drive), taking the shorter ferry between St. John (longer drive) and Digby or the longer ferry between Portland and Yarmouth (shorter drive). We initially planned on using the ferry between St. John and Digby but changed our minds a few days before leaving and booked a round trip between Portland and Yarmouth instead (this caused some confusion for our lodging resulting in what must have been a very frightened and upset women screaming at 2am in the morning but that’s another crazy story for yet another time). This wouldn’t save much in cost but would save us a few hundred miles of driving. We used a few websites and apps to plan the trip: PlugShare to look for charging stations, Google Map for route planning (possible in PlugShare but, really, come on, of course you’re going to use Google Map), Yelp to look for restaurants, Expedia for lodging, and we ended up buying an app called Road Trip Planner which was great for capturing our entire itinerary. The strategy would be: always charge over night, stay within walking distance to a charging station or preferably a place with one (will get back to this below), eat restaurants near a charging station so waiting for charge always involves a meal, and bring the charging cable just in case.

How charging worked out

On the first day, we used what’s called fast charge. We got to the charging station a little before noon with about 30% charge left, plugged the car in, tapped the membership card on the station, pushed the start button on the station, then walked to a nearby restaurant for lunch (which turned out not be a sit-down restaurant and was actually, true to their name, literally a Chowder Factory; again, I’ll save this for another time). When we got back about an hour later, the car was charged back up to full and ready for the rest of the trip. While we were eating, I was able to check on charging progress on my phone via the Chevy app. This charging station was from ChargePoint and was free.

We did something similar on the last day (less problems with restaurants that time). For the rest of the trip, we used mostly what’s called L2 (Level 2) chargers. In Nova Scotia, all the ones we used were free except one and worked great. They’re not nearly as quick as fast charge but worked fine for how we used them — an hour here and there while we ate or overnight while we slept. With fast charge, we were able to get 75-80% charge back in an hour. With L2, we were getting 10-12% an hour.

There was one night where we were not near a station and we asked the resort if we could plug the car in overnight. They let us park next to a building with an outlet outside and we used the car’s charger. This would be L1 charging and would add 10% every 5 hours or so. But charging overnight this way (about 10 hours) gave us enough for the next day for where we were headed next.

Admittedly, there was one drive on the south side of Nova Scotia that we were not able to do because of the scarcity of charging stations. Perhaps in the future.

In the end, we only paid for two charges totaling about $40 (or one lobster dinner in Halifax). Both times, we filled up from 10-20%.

Well, I guess it does! Everyday, we planned where we’d go, where we’d charge and for how long, and what we’d do. And then there were times we went off the beaten path and found treasures untouched by tourism. Perhaps all this planning sounds inconvenient but so is getting stuck some place. But we weren’t too worried — we figured we can always take advantage of OnStar if needed. We never did. In Cape Breton not too far away from The Clucking Hen Cafe (I highly recommend as many do on Yelp), we drove by a sign that said “No gas next 50 km” to remind drivers and motorists they could get stuck if they’re low on gas. We laughed and said “No gas, no problem!”

Because we planned our trip this way, there were places that we visited that we would have never thought to stop at or existed! A few times, we went out of our way (scenic routes on a sightseeing tour, go figure). Sure, we planned on so many miles on this particular day but we also knew that when we’ll get charged back up and how much extra charge/range we have so it wasn’t a big deal.

One place that we stayed at is called the Glenora Distillery and Inn. It’s a whiskey distillery with an amazing restaurant and very comfortable rooms in southern Cape Breton. We told the staff that, “we came for the charging station, we’ll be back because of the food.” And there many other wonderful discoveries like this because of where the charging stations were located. By the way, everything tastes better infused with whiskey. EVERYTHING!

How The Chevy Bolt Drives

The car was superb. It’s a fun zippy little car (0-60 mph in 6.5 seconds). It handled the curvy Nova Scotia backroads with confidence and poise. And up and down hills, the regenerative breaking is astounding in “L” mode — in this mode, you can drive the car most of the time using just the accelerator (i.e. one pedal driving). It’s eye opening how much smoother the ride is when you don’t have to use the brakes to slow down every time. The car was very very efficient at 50-70 km/h (30-45 mph). Like most EV’s, it’s not as efficient at higher speeds (i.e. highway) but it did okay. The EPA rating of 240 miles (or 400 km) is based on averaging 4 miles/kW (the car has a 60 kW battery, 4 x 60 = 240). On highways, we were still getting about 3.5 miles/kW which is still 210 miles (340 km) range. Driving the backroads where the best sites are, we were easily getting over 270 miles (435 km) range. I’m completely addicted to “L” mode now!

We attended our area’s National Drive Electric Week (NDEW) event the week after we got back. I was speaking with another Bolt owner and she said something that really resonated with me, “it’s not range anxiety, it’s range awareness.” This is so true. I admit that the first year of driving the Nissan Leaf with only 80-100 mile range (60 in the Northeast bitter cold), I had range anxiety. But now that I’ve been driving an EV for over 3 years and know what to expect and having one with higher range, it’s really just about awareness — how much will I really need today even if something unexpected comes up, how much charge do I have.

There’s a certain satisfaction when you get to your destination and there’s only a little charge left. It seems like you barely made it. But you smile because you knew you’d make it — it’s mathematical certainty. And there’s a lot of satisfaction letting gravity pull the car down a steep hill; watching the regen at work putting energy (which ultimately equates to money) back into the battery. And you see your efficiency (miles/kw or kWh/100km) reach a number you’ve never seen before — it’s like a game and you think to yourself, “I can beat this score!”

If I step back and think about it... when I was driving an ICE (internal combustion engine) and the gas tank was low I was anxious about range then too (i.e. I can probably make it to work but will need to fill up before going home). But it was only because there are so many gas stations around that I didn’t worry about it as much. But... all those gas stations, all that land... so that we don’t have to think about how much energy we’re using... maybe it could have been a park, a playground, or a lighthouse... what other uses could they have been for? How impractical is that?

PS - If Chelsea from Baccaro Point sees this, THANK YOU for the painted rock! It’s beautiful and we adore it!

kent beuchert wrote on September 16, 2017 - 8:16am Permalink
Obviously SAE CCS charging protocol stations will be spares compared to Tesla supercharger stations, which have been around for several years now (and overcrowded, I might add) . However, the futrue is far brighter for CCS charge sttaions, since only Tesla uses supechargers and most automakers (all American, German and European) already use CCS and the Asian automakers will almost certainly switch to CCS from CHAdeMO. CCS protocol also has an upgrade to 350KW, which would make it the fastest - look in the not distant future for EVs that can charge to 80% in 15 minutes. This article describes perfectly my argument that you don't need 5 minute charging capability at any time, even while traveling - you simply charge when you eat/sleep. In the case where charges to 80% take half an hour, for a 250 mile battery pack, you can easily wear yourself out driving (580 miles) while charging only twice, total of two hours, (but shortly one hour). You always will have a full charge at the start of the day. Obviously charging stations are not going to be plentiful until the numbers of EVs on the road are significant - but they are ready to become so - at least 40 EV models will be pouring out of automaker factories within the next several years. And all chargers will be DC fast SAE CCS chargers.